Trending Stories from The Marquee
You are at:Home»Features»Fort Collins Music eXperiment
By Marquee Magazine on April 1, 2012 Features, Festival Coverage 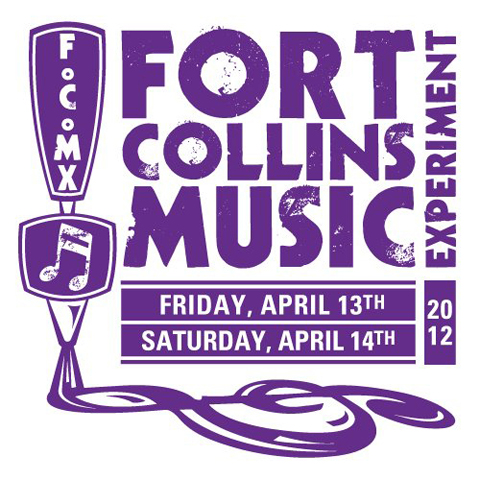 On April 13th and 14th, the Fort Collins Music eXperiment (FoCoMX) will be unleashed on the streets of the “The Fort.” The experiment is being ‘conducted’ by the Fort Collins Musicians Association (FoCoMA), a non-profit organization in Northern Colorado that provides education, support, and networking opportunities for the Fort Collins music community. The two day festival will feature over 300 Northern Colorado bands at 30 venues over two nights. The festival is designed to represent all genres, and bands with varying degrees of “success” under their belts. The lineup features everything from weekend warriors, established musicians, and bands just stepping into the ring; but all of them are ready to show crowds what they’ve got.

A majority of the music is happening between 6 p.m. and 2 a.m. on both Friday and Saturday nights, but bands start playing as early as 3 p.m.

For festival goers, navigating through the hundreds of bands can seem quite daunting — almost like a Colorado version of the famed SXSW. There are a few different approaches you can take when experiencing FoCoMX. You could just wander in and out of the dozens of venues, just go for the names you recognize, or you can manically strategize. For those who have no idea but want to soak in as much local flavor as possible, The Marquee came up with a “suggested route.” The route enables viewers to see 12 different bands’ sets in their entirety, with plenty of time to eat, explore and of course take full advantage of this great opportunity to see, and support, local music.

Four friends started jamming in a basement years ago, and their only goal was to play the music they loved. As the Blendercats built their repertoire of covers by artists such as Tower of Power, Spin Doctors and Stevie Wonder, original songs began to take shape. The Blendercats are designed to create a party mood, without taking themselves too seriously. This band rocks, but they do it with a funk groove.

Kentucky Parlor Pickers will further pick up the pace with a unique blend of rock and roll, bluegrass, blues and country that they simply call “Roadhouse” music, and they have been presenting it on small town stages throughout the country since 2009. A simple formation of acoustic guitar and standup bass rocks in an organic fashion.

Danielle Ate the Sandwich has had a meteoric rise in Colorado’s folk scene, and she has taken her show on roads all across the country. Her YouTube audience is massive, and certain videos have gotten upwards of half a million views. Ms. Ate the Sandwich writes intelligent songs filled with humor and wit, all set to the bouncy tone of her ukulele. In addition to her crack songwriting her stage banter is some of the sharpest around. (If you can’t stand the heat, stay out of the heckle-zone.)

After some folky ukulele tunes, it’s time to kick it into high gear. The High Gear Daddies may have formed just over two years ago, but they are made up of experienced musicians. Guitar, bass, and drums kick out rockabilly sounds that will conjure a time when big-finned convertibles cruised up and down College Ave.

Four MC’s incorporate socially aware lyrics with live instruments and hip-hop/dub beats, finalizing itself in what they refer to as dub-hop (or should that be ‘reefer to as doob-hop’?). Peace Officer’s energetic live performances have garnered them much attention, including a recent nomination in the hip-hop category for ‘Best of’ Westword.

Wendy Woo has been a mainstay in the Front Range music scene for years. Her positive, catchy and upbeat songs are great for families; and they provoke smiles and general cheeriness. Some songs are pop, others lean towards acoustic roots rock, and she is able to satisfy a broad spectrum of tastes.

Colorado has an amazing bluegrass tradition filled with many types of sub-genres. Traditional bluegrass, slamgrass, jamgrass and Gipsy Skillet’s “gipsy-grass.” Like the band’s namesake (properly spelled ‘Gypsy Skillet’), the group’s music is a mish-mash of ingredients, many of whom seem to not belong together, but somehow compliment one another perfectly.

When a band’s list of influences contains Sublime, Bob Marley, Led Zeppelin and Modest Mouse, there is large potential for a good time. This young band combines reggae, funk and classic rock sounds into an infectious groove.

Ruth Anderson is a composer, orchestrator, and flautist. She has been the recipient of grants from the National Endowment for the Arts and New York State Council on the Arts, as well as a Fulbright Award. In this unique element to FoCoMX, Anderson will be playing to the silent film The General with Buster Keaton.

An acoustic jazz trio soaked in the gin mills of the 1920s and ’30s, they perform swinging originals as well as the standards of the time they reflect. This isn’t elevator music, but the type of jazz that demands doing ‘The Charleston.’ Pre-war vocal jazz, uninhibited improvisation, and chemistry with the crowd are what these men are known to provide.

Auditory Elements is Fort Collins DJ/Producer JD Garrick. With a heavy focus on hip-hop, dub and electronica, Auditory Elements falls under “glitch-hop,” and will exhaust any unspent energy and cap our “Suggested Route” for FoCoMX 2012.