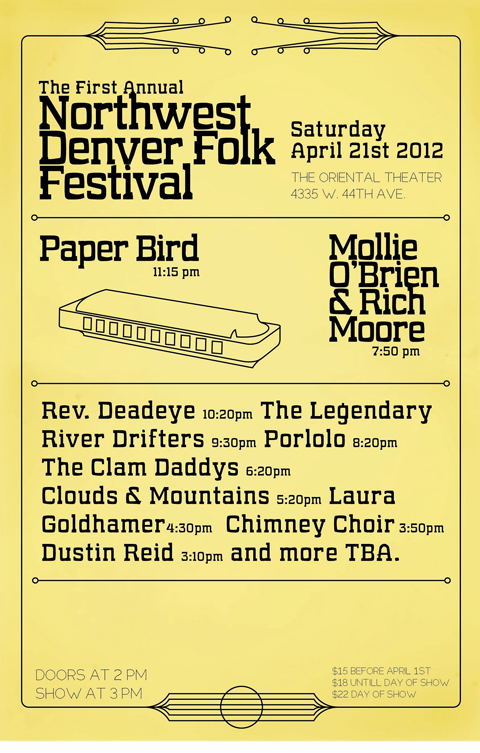 Denver has a well established folk music scene, and The Denver Folklore Center, Swallow Hill Music Association and the Rocky Mountain Folks Festival are all examples of its strong foundation.

It’s a foundation that continues to grow and this month the first annual Northwest Denver Folk Festival will add another element of support to the already solid base. With ten bands spanned over nearly as many hours, this inaugural event was designed to capture a snapshot of Front Range folk, and the lineup reflects the diversity of the scene.

This festival is not simply made up of singer/songwriters and their guitars, but instead showcases the full artistic breadth of modern day folk in Denver.

Singer/songwriter Dustin Reid will be the first to take the stage, and he is the only solo act of the event. He has shared the stage with local folk acts like Nathaniel Rateliff and Danielle Ate the Sandwich, as well as other artists on this bill.

When Chimney Choir rattles off some of their implements of percussion, one might think they are showing off what they bought during a day of yard sale hopping. They have been known to bang on a ladder, the keys of a typewriter, or a Samsonite suitcase to relay a rhythm; and their live performances are just as eclectic as the items on the stage. The three members of this experimental folk syndicate switch instruments with each other on stage, use synthesized psychedelic sounds, and also incorporate performance art into their set. The folk element is anchored by mandolin, guitar, banjo, accordion, harmonica, flute, and three part harmonies.

Laura Goldhammer creates art in many forms, and when she is on stage she displays them all. Her musical ideas are expressed in a dramatically simple way on a banjo, and self-composed animated short films light up a screen behind her. Stories come together as Goldhammer percussively guides audiences through an audio visual display of her thoughts, a unique approach that won her Westword’s 2010 Mastermind Award.

Paper Bird’s Mason Terry lives near a place called Lair O’ the Bear Park, and his sound is a result of hibernating at the base of the Rocky Mountains. Terry stood his bass in a corner and grabbed a guitar and notebook for this solo project, but his performances are filled out by the presence of an accompanying musician on drums. Airy, spacious and melodic, the subtly detailed picking merges with the subdued rhythms, passes through jagged canyons and ends up on the banks of a mountain stream.

Looking like ZZ Top and sounding like voodoo blues troubadours, The Clam Daddys fit right into the non-existent boundaries of this newly formed festival. Tommy Knox and Moses Walker have been playing their folk/blues fusion for over of a decade, and gruff and guttural vocals are their most distinguishing characteristic — well, that and their crazy beards.

Mollie O’Brien is a vocalist that can handle any genre of music. Jazz, Appalachian traditional, gospel, blues and folk voices are all sung in a fluent tone. She first began performing in the coffeehouses and churches of Wheeling, West Virginia with her brother Tim, of Hot Rize fame. Nowadays, Mollie’s husband Rich Moore is her chosen stage partner. The musical matrimony of O’Brien and Moore brings together two veteran musicians and has created a duo with great chemistry on the stage. Since O’Brien and Moore tap into a more traditional sounding repertoire, this will most likely be the most straight forward folk set of the event, reminiscent of the simple sounds from the early Newport Folk festivals.

The artsy awesomeness of the blog Denversyntax.com once wrote that “Porlolo is the closest thing you will get to a murder between lovers. And while none of it has to do with anything physical, Erin Roberts’ dark folk infusion can be violent in its exploration of emotions and everything murky, watery and mysterious. On the surface Roberts’ work sounds like an incurable pessimist lamenting about anything feeling. But no, Erin Roberts is not so much an enigma. Sure, Porlolo is feeling and dark, watery and mysterious. But Roberts’ songs are also about a world of possibility.”

The Legendary River Drifters play barroom style folk with a hint of country metal growl. The sound is seriously steeped in tradition, both with instruments and lyrical themes. The songs are filled with religious undertones, and this band seems to want to make its audiences dance with the devil and ask Jesus for forgiveness the next day.

If The Legendary River Drifters don’t put the fear of God into the room, Reverend Deadeye will. His youth was filled with religious snake handling, Pentecostal tent revivals, and the musical fervor that was the soundtrack to both. The Reverend is not looking to save souls, but rather to own them. He achieves that ownership by charming his audience with Delta blues played in a punk fashion, and singing his spells into a beer-can microphone.

Paper Bird recorded their first album five years ago, but they really began to soar in 2011. Last year found them at Red Rocks in front of over 8,000 people. Their uplifting sound is haunting, joyful, transcendental and free. There are no confines to their creations, but well-crafted songs and stellar musicianship do establish the ground rules.

The seven musicians that make up the band take paper dyed with folk, bluegrass, R&B and jazz and fold in some authenticity to form the animal known as Paper Bird.