Trending Stories from The Marquee
You are at:Home»Brandon Daviet»Overkill
By Marquee Magazine on April 1, 2012 Brandon Daviet, Features, Interviews 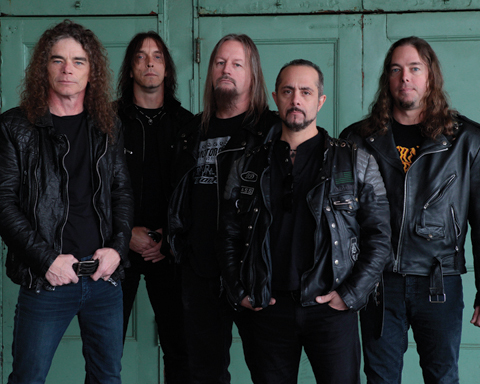 Metal purveyors Overkill are decidedly from New Jersey, yet as the current renaissance of New Jersey culture — think the real-time humor of “Comic Book Men” or the insulting jabs of “New Jersey Housewives”— pelts the mainstream with its distinct regional flavor, singer Bobby “Blitz” Ellsworth is careful not to completely align the band with the state that also produced such high quality fare as “The Misfits” and “The Sopranos.”

“When I think of this band I really think of us having a non-West Coast vibe, but yeah, there has always been this positive association with bands from New York and New Jersey, but that’s a new question. Usually these interviews are about the music,” said Ellsworth a bit quizzically as he settled into a conversation with The Marquee.

The question served its purpose as his response instantly painted the picture I had always imagined of Overkill’s co-founder and frontman; that of an energetic music lover with rapid fire monologues and just enough East Coast impatience to make you want to watch your manners around him. But of course, Ellsworth’s main asset is a voice that not only fits Overkill’s hardcore leanings to a tee, but makes Ellsworth one of the most instantly recognizable voices in metal. “You know, singing was just something that was in our family,” said Ellsworth. ”It was real simple, when there was a family reunion the whole family was standing around the fireplace harmonizing and I was never the kind of kid who was afraid to open his mouth. I didn’t know metal or that I had a voice for metal prior to Overkill but I knew about the singing.”

It’s also important to realize that Overkill aren’t among the legion of metal bands that became inactive somewhere around the dawn of grunge. In reality, Overkill is one of the harder working bands on the scene with over 15 albums under their belt, with most of those coming after their two most successful albums Under the Influence and The Years of Decay.

That said, it stands to reason that the band has honed their own approach to working in the studio. “You know the creation of what a band’s going to do is always a fun part of it but, of course, there is a lot of tension that goes along with that because you want the highest results possible, and the studio is the place to achieve that but it is also the place not to achieve that,” he said. “Things are working out so well this time because the chemistry is at a high level, you have five guys that want to spend time together and then you have 150 shows between releases where we are together on the road playing cards, shooting dice and telling stories. So when you apply that positive energy to the studio you get positive results,” said Ellsworth.

Positive energy is not something one always associates with metal music, but just like any other creative endeavor the end result is often the product of the songwriter’s environment and admittedly, age.

Overkill’s new record The Electric Age, released late last month, reflects the band’s more optimistic feelings and provides an interesting counterbalance to darker Overkill records like 2000’s Bloodletting. “When we did that album the scene was not very healthy. The scene right now is very healthy and I think that all of our records reflect where the scene was at the time. I think the Bloodletting album was probably negatively aggressive where as this one is positively aggressive all the way from the production to the separation of the instruments,” Ellsworth said.

One of the tracks on The Electric Age that immediately jumps out at the listener is “Drop the Hammer,” a straight ahead, trademark Overkill assault with just enough punk rock tinge, both musically and vocally, to separate it from the pack. “I always look for un-common American expressions and that’s where I got a lyrical basis for that song. We were going with an electrical theme with this record and this is something different,” said Ellsworth. “‘Drop the Hammer’ is an expression for releasing the hammer of a gun, like an old six shooter, and I just thought it was an interesting title for a song.”

Ellsworth’s ability to adapt themes for songs lead to one of the Overkill’s most high profile moments, which came in 1989 when the band released the song “Elimination.” The track was a punctuated, speeding train of an anthem laying out the end results of nuclear weapons and warfare. At the time, it was a subject that any metal band worth their salt was taking on, but Overkill hit the bullseye for many with their assessment of the times. Today, to hear Ellsworth reflect back to his songwriting method at that particular time gives thought that of all the musical styles, perhaps metal is best adapted to evolving around the growth and maturity of the musicians involved. “I can only speak for myself,” he said, “but I’ve drawn away from any kind of social and political themes. I’ve found, as time has passed, it’s not my job to tell people how to think. It’s their own and I think undue influence is not really necessary.”