Trending Stories from The Marquee
You are at:Home»Cover Story»Deer Tick
By Marquee Magazine on May 1, 2012 Cover Story, Features, Interviews, Timothy Dwenger 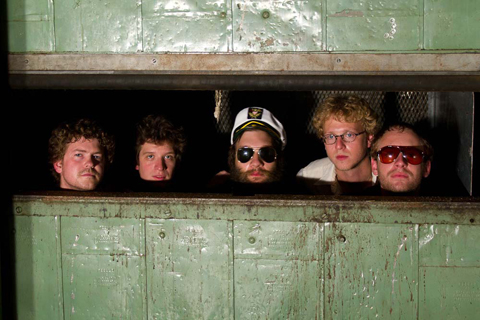 In the music industry there is such a huge difference between recording in a studio and performing live. Bands like The Beatles chose to give up touring entirely and focus on the sound they could only achieve in the studio, while other bands, like The Rolling Stones, seemed to focus more on harnessing the energy and power of their live show in studio settings. It’s a delicate line, and one that’s difficult to toe without alienating one group of fans or another. Are people coming to the shows to hear what they heard on the record? Or are they coming because they genuinely have a love for the band, their creative passion, and what they do on stage?

Providence, Rhode Island’s Deer Tick may not be The Stones or The Beatles, but they certainly are one of the most creatively prolific bands of recent memory. With four albums and two EPs in their short, seven-year career, John McCauley and his various band members have flirted with folk while remaining, at heart, a rock and roll band. Their most recent record, Divine Providence, proves this, in spades.

“I think we were desperate to record something that would capture our live shows,” McCauley said in a recent interview with The Marquee as he prepared to head out on a two-month tour. “Even when we play old tunes like ‘Spend the Night,’ now it sounds more like T. Rex than anything else. We’re able to kind of adapt to whatever situation we’re stuck playing in, but we got really sick of a lot of it, so we made it our mission to make a louder album. I think it really takes coming to a live show to ‘get’ us.”

The ‘us’ that McCauley is referring to is he and his four bandmates. While Deer Tick used to be a rotating cast of characters, McCauley is adamant that the current incarnation of the band is as permanent as it can get. “We’ve been a solid five-piece for a few years now,” he said. “This is the definitive lineup. If anybody quits or dies, Deer Tick is done. It’s me and Ian O’Neil on guitar, Chris Ryan on the bass, Rob Crowell on keys and sax, and Dennis Ryan on drums. We all sing.”

That idea of everyone singing is something that’s relatively new to Deer Tick. Until Divine Providence was released, McCauley was the only one who sang, but the new record features Ryan singing the dark tune “Clownin’ Around,” about the serial killer John Wayne Gacy, Jr. Ryan does a great job on the tune (in fact it’s one of the standout tunes on the album) and McCauley promises it’s not the last time that one of his bandmates will be featured on lead vocals. “I’ve always wanted to be in a band and not the star of the John McCauley show, so it seemed like the right move,” he said. “Yes, we’ll be doing a lot more of that.”

As evidence to this, Deer Tick released an EP entitled Tim back in February that showcases McCauley’s bandmate Ian O’Neil singing lead on another fantastic track, “She’s Not Spanish To Me.” While this EP is comprised of songs that were leftover from the sessions for Divine Providence, it is definitely not just a collection of cutting room rejects. “They’re good songs in my opinion, and didn’t need to be re-recorded,” McCauley said as he explained why the band decided to release the EP. “We just felt they didn’t fit the mood of the Divine Providence record.” He went on to laugh a little about why the band decided to name the EP “Tim.” “Tim is Tim Putnam, owner of our record label Partisan Records,” he said. “We almost got it manufactured with his face on the cover without him knowing about it but the guy who mastered it, John Baldwin, screwed up and mentioned ‘The Tim EP’ in an e-mail chain and let the cat out of the bag. We like to fuck with Tim. He likes to fuck with us, too.” Gag name or not, Tim is a very solid five-song EP that even allows fans a glimpse into the band’s past with an acoustic version of the Divine Providence gem “Main Street.”

Divine Providence and Tim are definitely a departure from what many Deer Tick fans may have been expecting, but anyone who has seen the band live knows they are also Deer Tick projects through and through. Many of the songs feature McCauley’s strained vocal chords cranking out thought provoking lyrics, but they are flavored with a punk sensibility that was absent from earlier records. In fact, it’s the edginess of The Ramones and The Replacements, that has taken the place of influences like John Prine and Hank Williams and keep these recent releases from being filed under Folk.

So, whether you are a fan of the old Deer Tick or the new, you have to give McCauley and his band credit for stepping to the plate and having the guts to put out an album that was unlike anything they had released before. The irony here is that on Divine Providence they were doing it to give the world a better picture of what they are like when they are performing live and in their element.