Trending Stories from The Marquee
You are at:Home»Brian F. Johnson»NedFest
By Marquee Magazine on May 1, 2012 Brian F. Johnson, Features, Festival Coverage 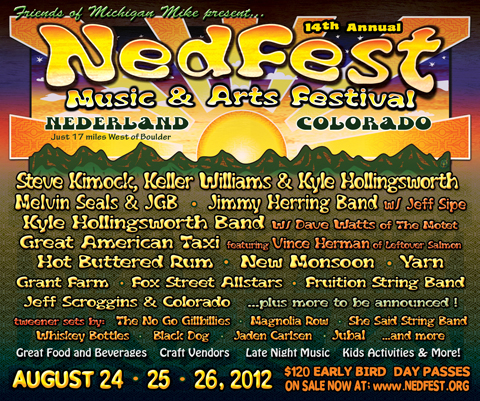 NedFest suffered the tragic loss of its founder Michigan Mike Torpie in late 2011. But luckily for the festival, the town of Nederland and Torpie’s legacy, the event is soldiering on.

In Torpie’s name, a non-profit organization named Peak to Peak Music Education Association has been formed, which will preside over the event. The group’s goal is to raise money through the festival that will be donated to organizations along the Peak to Peak corridor to enhance and increase instructional and experimental music education among children.

The annual three-day festival started in 1996 in Chipeta Park, and after a short hiatus it moved to its current location at the ballfield, where it’s been going steady since 1999. Over the years, the bluegrass and improv-heavy festival has attracted some legendary artists from David Grisman and Leftover Salmon, to  the Grateful Dead’s Bill Kreutzmann and the Funky Meter’s George Porter, Jr.

You’re going there to see: Steve Kimock, Keller Williams and Kyle Hollingsworth together, Melvin Seals and the JGB, and the Jimmy Herring Band.

You’re going to come home talking about: The surprise headliner that will be announced in early May.

(As calculated by maps.google.com from

YOU NEED TO KNOW: NedFest can sometimes overwhelm the little mountain town. Simply put, parking can be a bitch. But NedFest has something few festivals can offer — RTD bus service. Those who are wise will park in Boulder and take a short, and very cheap bus ride right into downtown Nederland. For less money than you pay to park at regular concerts, you can park and be chauffeured to your destination in RTD style. Barring that, though, sticking your thumb out at the bottom of the canyon usually works just as easily.

Camping: Not on-site, but family camping is available in Chipeta Park only a few hundred yards away and several other off-site locations, many of which are free.