Trending Stories from The Marquee
You are at:Home»Cover Story»Rodina
By Marquee Magazine on May 1, 2012 Cover Story, Features, Interviews 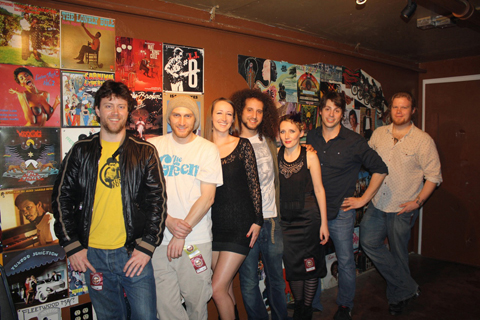 In the U.K., funk music is an underground scene. Here in the Front Range, it’s a mainstay.

The New Mastersounds are one of those mainstays here, despite being from Leeds, England. And now New Mastersounds keyboardist Joe Tatton is hammering his Hammond in a new Colorado-based side project — Rodina.

Rodina is a who’s who of Denver talent, and the entire lineup is rooted in funk and reeks of Jazz Fest and Jam Cruise. Tatton and his partner, singer Aoife Hearty, have been performing under the name Rodina for a few years, but now they have added Joshua Fairman on bass (Kinetix), James Dumm on guitar (Fox Street All Stars), Eric Low on drums (Fox Street All Stars) and Joel Scanlon on percussion (Giant Panda Guerilla Dub Squad).

“Rodina started off as a songwriting partnership, between myself and Aoife, and we recorded an album about two or three years ago, called Over the Sun,” said Tatton in a recent inter-continental conversation with The Marquee. “The album had a quite ambient and jazzy influence; sort of Morcheba/Zero 7. We recorded with a lot of great U.K. musicians, and we gigged it around a bit. We played with so many different musicians, but Rodina was basically just Aoife and I.”

But that all changed last summer at a festival here in America. “I met up with Josh Fairman at Summer Camp in the States, while I was playing with The New Mastersounds, and Josh was playing with Kinetix. Josh jammed with us at Summer Camp, and then me and Aoife went out to stay with Josh in Denver, and we did a couple of little shows out there. We went to his studio and met a lot of cool guys; that’s how the Denver connection started really,” Tatton said.

Once the connection was made, sparks flew, and a new Rodina began to form. “In January we got an opening slot for George Porter Jr. at Cervantes’ Other Side, and at the same time we recorded an EP at Josh’s studio, which we’ll be releasing when we come over in May. Both the show at Cervantes’ and the EP feature artists from other great Denver bands as well, and we are going under the collaboration title of Rodina,” said Tatton.

When Rodina’s original chill sound and vibe was introduced to the jam friendly Colorado musicians that its lineup now includes, what emerged was a more danceable and crowd friendly Rodina. “It’s really quite diverse, but there will be a fair portion of funk and soul in there, just because of what my background is, and some of the other guys,” said Tatton. “It’s got a very nice jam band element to it. I see it becoming quite an exciting original project. The stuff we’ve done in the studio, it’s thrashing out and jamming, but it is influenced and refers to the pop and the jazz quite nicely. I’ve got songs, Aoife’s got songs, Josh has written some funk tunes. It’s a real mixed bag.”

Not only is it a mixed bag, it’s also a cross-continental endeavor, with the musicians developing material while being separated by the Atlantic. “It’s quite strange, because this project is crossing the ocean. I am recording vocal parts and keyboards over here, and sending it to Josh in Colorado,” said Tatton.

In addition to his duties on bass, Fairman is also known for his talents in the studio. Fairman and percussionist Scanlon operate Laskin Productions, and Fairman is doing a majority of the producing on this project, with Tatton stepping in on the rest. Although Rodina’s members are living on two different continents, Tatton is pleased with the ability to use technology to compensate for distance, and he sees a bright future for Rodina. “We are hoping to have an album by the end of this year, with this lineup, and we’ll definitely be doing it at Josh and Joel’s studio — which is really amazing.”

The next chapter of Rodina is being written this month, as they start spreading their new sounds around Colorado and California, bringing the EP they recorded with them. “We are doing a couple of shows in Colorado, and then a short run down the West Coast, from Seattle to Los Angeles. It’s really exciting how it’s all seemed to come together in the last month. I am excited to see where it goes, and it’s going to be formed by how these shows go, really,” said Tatton.

Colorado is very appealing for the seeds of a new and genre-blending project like Rodina; Tatton feels this music scene provides a more fertile ground for this group than he’d find back home. “The U.K. is funny, because everything has to be pigeon holed. The U.S. opens its arms to the kind of music that crosses over boundaries. I find it such a better experience gigging over there in the States, because you can just try something new, and you can just mix it up a bit,” he said. “People who come to one type of show usually also like many other types of music. That’s why I am quite excited.”