Trending Stories from The Marquee
You are at:Home»Brian F. Johnson»Roger Waters – THE WALL @ Pepsi Center
By Marquee Magazine on May 8, 2012 Brian F. Johnson, Live, Live Reviews

By Brian F. Johnson
Photos (except for The Pig) by Lisa Siciliano/dogdazephoto.com

As a general rule of thumb, I hate scripted shows. Shows with high production values typically lose the spontaneity to connect with their audiences, due to the fact that everyone on stage is more worried about making their cues than they are focusing on the music.

Despite those constraints though, Roger Waters performing The Wall, is —hands down — one of the best tours in years. The Wall combines the theatrics and special effects of a Vegas show, with the imagery of Water’s masterpiece work. It’s incredible. It’s stunning. And it’s also completely contradictory to everything Pink Floyd’s The Wall stood for.

The performance starts with big indoor pyrotechnics that fire as “In The Flesh” (which originally, had the apt working title of “The Show”) kicks off. Waters appeared from behind the already, partially constructed wall, looking relatively young and considerably more handsome than he did in his youth. The man has aged well, but as soon as he hit the “Lights… roll the sound effects… action!” part of the song, there was no mistaking that Waters is now pushing 70 years old. 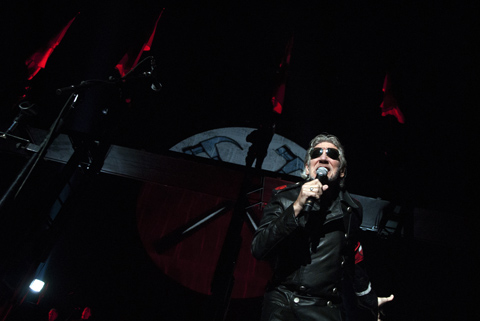 The Wall was always Waters’ vision and for this show, he makes no qualms about furthering that imagery with his own poignant slant. As the sizeable group, played “The Thin Ice” photos and stats of victims of war flashed on the screen. There were pictures of dough boys who lost their lives at Normandy, France during WWII, activists who had been claimed more recently, firefighters that perished during 9/11, and so on. It was particularly moving.

“Another Brick In the Wall (Part 1)” showcased the insanely dialed-in surround sound. I swear there was a group of singing first-grade English students standing behind me at the end of the song. The sound wasn’t just wrapping around the heads of the audience members, but seemed to be seeping up from the floor and from every bit of space in the Pepsi Center. The Wall is the best use of surround sound I have ever witnessed in a live setting.

“The Happiest Days of Our Lives” marked the first appearance of The Schoolmaster, in the form of a giant, inflatable 3D marionette puppet. Particularly trippy and wonderfully executed, The Schoolmaster’s dance on the corner of the stage was one of the show’s highlights.

With the slogan “Fear Builds Walls” on the stage wall — which throughout the first set had more and more blocks added to it during each song — and with the help of a group of school-aged kids, Waters launched in to The Wall’s biggest hit “Another Brick In The Wall (Part 2).”  When the hit as we all know it ended, Waters added an acoustic reprise of the song dedicated to Jean Charles de Menezes, who in 2005 was shot and killed by British police after being mistakenly identified as one of the fugitives in a failed plot to bomb the London Underground.

Up until this point in the  show, Waters had me in the palm of his hand. I was impressed that they had added some extended solos on some songs. I was blown away by the visual effects and was enjoying watching the wall being built before our eyes. But it was right at “Mother” that Waters started to lose me. Waters explained that in 1980 Pink Floyd had performed, and filmed, The Wall in its entirety at Earl’s Court in London. With artfully distorted footage playing behind him on the screen and the wall itself, today’s Waters accompanied the 1980 version of himself in performing “Mother.” It was a neat concept, but some of it came off as a karaoke performance, and some of the lines that Waters was supposed to sing, he left in the hands of the video version of himself.

But that’s not what started to change my mind about the show. I can pinpoint the exact moment where they lost me, and it was right after Waters sung the line “Mother, should I trust the government.” Right then, on the wall in that famous Pink Floyd font, the words “No Fucking Way” were projected. Now, c’mon. Part of what made The Wall, such an exemplary album and such a powerful statement was that it didn’t pander like that. No one ever said “No Fucking Way” after that line before, because nobody had to. It was understood, and having it put in our faces like that seemed to cheapen the message.

Following that, was the gorgeous song “Goodbye Blue Sky.” But again, the message seemed dumbed down and hypocritical. As cartooned bombers flew out toward the audience, they opened their bomb doors to begin dumping not bombs but corporate logos. McDonalds, Shell and Mercedes logos seemed to be raining down on the crowd — kind of a bold statement to be made considering that the show was being held at the Pepsi Center and t-shirts were being slung in the lobby for $40 a pop. 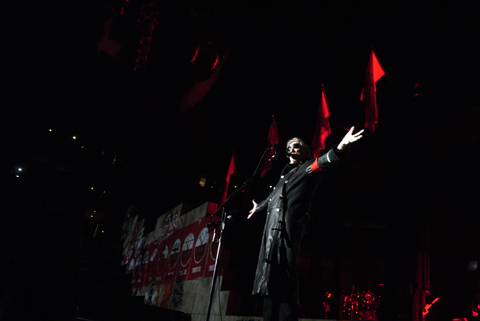 And for that matter, as the wall continued to climb toward the rafters, it dawned on me, that as cool as it is, there’s something that just doesn’t sit right about a wall being constructed with OSHA safety regulations. Now, I don’t expect Waters and his crew to throw something together that could be dangerous, but it is a bit funny that a show so that is so anti-government is so careful to follow codes in constructing a fake wall. Where’s the danger in rock and roll anymore?

With the wall completely built and a moderate intermission behind them, Waters and crew laid into the second set, or disc two, playing “Hey You” completely behind the wall. They then moved in front of the wall with the whole band dressed in fatigues, berets and sunglasses, and Waters as the evening’s dictator, barking orders to clap.

With an odd, almost Doo-Wop arrangement of “The Show Must Go On,” which featured some new lyrics that were never in the film or on the original album, Waters showed that he wasn’t opposed to making some modern-day edits to his work. But, when Waters picked up a fake machine gun and “blasted” the crowd as “In the Flesh” preached “If I had my way, I’d have all of you shot,” the theatrics seemed like a lame community theater interpretation of the song.

Not long thereafter during “Waiting for the Worms” very literal looking worms were projected onto the wall. It looked like a bad screen saver, in all honesty. And the song, which ends with a rant by the dictator over a megaphone, was so poorly executed that I believe in my gut, the megaphone wasn’t even transmitting a signal, and that Waters was simply acting as if he was yelling into it.

But, as the band dove into “The Trial” some hope was still there, and the video effects that made the wall spin in place (in one point, while Waters walked across the stage and ducked under it, lest he be struck by video bricks) was another great feat of the still astonishing visuals. 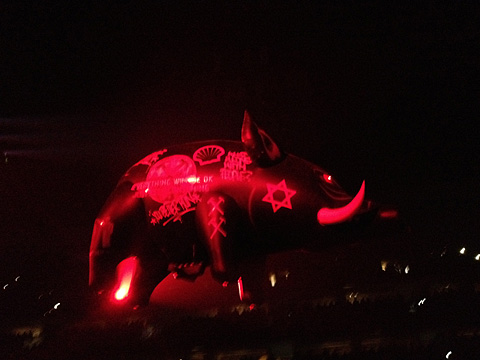 Those visuals, of course, ended with the destruction of the wall, with all of the bricks that had been stacked literally crumbling before the audience. The band, finally dressed in plain clothes walked out to great cheers in front of the rubble with acoustic instruments to play the final track of the opus, “Outside The Wall,” during which, massive Flaming Lips amounts of red confetti rained down over the crowd. The confetti was made up of the aforementioned dollar sings, and corporate logos which had fallen in video form during “Goodbye Blue Sky” — the capitalist remnants that signify even if all of our walls are torn down, that elements of greed will somehow prevail, like cockroaches.

All-in-all, The Wall is one of the most amazing performances and theatric undertakings that I’ve ever been blessed enough to witness. Still some of its execution, and the inability of the performance to overshadow the corporate structure in which it was taking place, revealed cracks in the production’s modern-day message, and ultimately that is more sad than the story of The Wall itself.