Trending Stories from The Marquee
You are at:Home»Cover Story»Jerry Joseph and the Jackmormons
By Marquee Magazine on June 1, 2012 Cover Story, Features, Interviews, Levi Macy 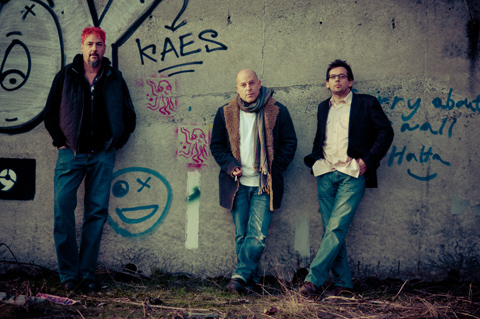 When it comes to the music industry, and even art in general, success can be measured in a multitude of ways. Even so, album sales, worldwide tours, and mountains of cash only get you so far. The real task lies with finding insight, learning lessons and spreading love with pure intentions.

For Jerry Joseph of the Jackmormons, this is a realization that may have taken a while to reach, but as he demonstrates with the new double album Happy Book, it’s never too late to learn new tricks.

The hardworking troubadour, whose career spans over two decades and boasts a catalog of more albums than even he can count, has certainly traveled a hard road full of peaks and valleys. The release of Happy Book marks the band’s first double album and proves that Jerry Joseph is a songwriter of monumental proportions. “I write about things I know, the things that happen in my life. I have to deliver that stuff every night so it’s important that I can get fully behind it,” Joseph said in a recent interview with The Marquee.

“It was a weird time in my life when I started writing this album. I was at this point where I was kind of new to sobriety. My son was born and my father died. It all happened at the same time. So, all of that was happening and I just had this window so I went down to my brother’s house in Mexico and wrote a lot of the songs to those themes,” he said.

As with most of Joseph’s work, this album is a sound all its own. One of the biggest draws to his body of work is that each album is singular in that it represents certain times. “I wouldn’t have told you that I thought this was art five years ago. I didn’t think singing in a rock band was the same as painting until just recently. Then I started to feel that this is clearly what I’ve devoted my life to. I’ve got a pretty big body of work, I don’t think anyone even really knows how many albums I have. Five years ago I just thought I was an entertainer,” he said.

It’s clear now that he is far more than simply an entertainer, he is an artist in every sense of the word and has never let the difficulties of the music industry get in the way of doing what he loves. “I think that always being in an under-the-radar band provides for some obstacles. You know, we are close enough to being really successful. We are in this weird netherworld, kind of like our own little bubble. We’ve always been a strange band that’s been caught in a strange world. We’ve kind of been known as a hippie band, but we are pretty aggressive for a three piece so it makes it a little difficult to play with a lot of the jam bands. This leaves us in a sort of limbo,” Joseph said. “But, that’s what just keeps you getting up in the morning. You know there is always a carrot. There is always something there and the people in charge haven’t pulled the carrot away from me yet.”

With a career as long as Joseph’s, a reputation is inevitably going to form. Although his may be as somewhat of a hard ass, he has learned that there are no rules to this game and things are always changing. “There are a lot of things I would have done differently. In the music industry, I’ve kind of been a lot more ruthless than people think I am. I have a lot of loyalty, I will never fire the drummer or something to just simply get a record deal, you know? Most of the people that I know that are successful at this business have a little more ability to be comfortable.” He went on to say, “I probably could have been less of an asshole, I’ve kind of been prone to emotional outbursts at times and I thought in a way that was part of my job. If I could go back and do it all again I’d probably just play it with my cards a little closer to my chest,” Joseph said.

Fortunately enough for his fans, all of these things have culminated in an album Jerry Joseph has been wanting to put out his entire life, providing some much needed hope for him and everyone who has two ears and the urge to become a better human.

With such a massive career that has taken the undefined songwriter all over the world, it goes without saying that many lessons have been learned, but at the end of the day he has come to terms with what is the most important one of all. “The lesson that I’ve learned the most through doing this job is how badly people want to just be loved and not be alone,” he said. “Everybody just wants to be a part of something. It could be a couple hundred or even just 30 people, but if I can touch them with my art then I’m doing my job right and I see it every night on their faces. I don’t think people come to my shows because they think I’m going to write a good song about drinking tequila. I like to think they want a little more depth. I’ve gone through this whole life and think about all the negative stuff I’ve put out. I’ve kind of been the guy that writes the dark junkie songs, but then I think about the moments when you find some sort of transcendence. It took me a while but now I realize we are all in this together and we can overthrow the darkness. In hindsight, I wish I would have been better at simply spreading love, but I know that I can get better at that as time goes on. Things always can get better. It’s never too late.”

:: Jerry Joseph and the Jackmormons ::