Trending Stories from The Marquee
You are at:Home»Brandon Daviet»Lita Ford
By Marquee Magazine on June 1, 2012 Brandon Daviet, Features, Interviews

The Queen of Metal, Lita Ford, Comes Back With Living Like a Runaway 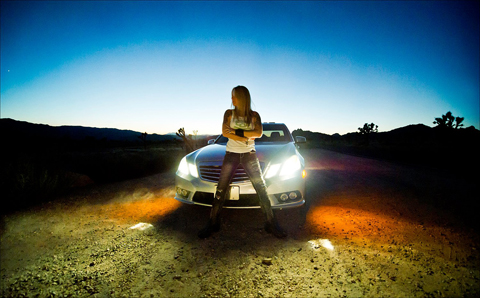 There is nothing more exciting to the true music fanatic than witnessing a well deserved comeback from a beloved artist, Aerosmith’s 1987 album Permanent Vacation and last year’s Worship Music by Anthrax being just two in a long list of examples. Although the jury of public opinion is still to be heard from, it looks as if adding Lita Ford’s new album Living Like a Runaway to the list of great rock and roll resurrections may be in order.

“This is a fucking Lita Ford record,” said the blonde bombshell guitarist as she settled into an interview with The Marquee. Her genuine excitement for the record not only came through in her voice but also in her music and makes any fan question why she stayed away so long.

The short answer is that she took some time away from the stage to raise her kids and focus on being a mother. There is also the fact that she spent some time living in Turks and Caicos, a group of faraway British islands that aren’t known for their vibrant music scene. In 2009, the album Wicked Wonderland was released, but it wasn’t the lack of fan interest that led that album to largely slip under the radar. Musically, the album had a strange vibe that didn’t really match Ford’s other musical output and many just assumed it was the sound of a musician trying new things. Ford explained that the situation was quite different. “That last album was something that was put out as a Lita record but really was out of my control. You can tell by comparing it to the new record that they just don’t match, sonically, musically it just doesn’t match. It was a record that was put out by the producers, although I got the credit for writing the songs I really didn’t,” said Ford. “In fact, I took the copies of that album that I had, which was a shitload, put them in my truck and threw them in a dumpster.”

To emphasize that this new record is the proper comeback that Lita Ford wanted to make, the new album — besides just being the blistering collection of songs that it is — also has something really special for the fans that have stuck by her side for the long haul. That said, the album is an album, not a bunch of random songs with no context to one another. “It’s stories of anger and stories of happiness. It’s not like the whole album is a story that goes together but they just all go together. It’s not like one song is about trees and another about cars, it is a very emotional record,” Ford said proudly.

There are also several editions of the record coming out, all with different bonus tracks. But unlike some castaway bonus tracks, Ford’s bonus tracks are worth seeking out, especially a mean cover of Sir Elton John’s “The Bitch Is Back.”

“Yeah, they are all equally as good and we really struggled with what we wanted to use as bonus tracks. The only reason we used “The Bitch is Back” as a bonus track is that it is originally an Elton John song. It’s really rocking and smoking and belongs on the record,” said Ford. “Hopefully, fans will decide that this record is so good that they will want to listen to all twelve songs and not just ten.”

To promote Living Like a Runaway, which will be released on June 19, Ford is hitting the road on a high profile tour with Poison and Def Leppard, two bands that are both known for sexual excess and their songs about sleaze.

It’s a world Ford is familiar with, being a veteran of the ’80s glam rock scene and a sex symbol in her own right.

The question after all these years is whether or not that is still something she sees as an asset or a liability when trying to promote a new record. “Sex sells. So it is absolutely a bonus. I never wanted to be some toothless, hairless person that let myself go to pot,” said Ford. “I could compare it to Steven Tyler, I mean how many women love Steven Tyler? It doesn’t take away from his voice at all. He still sings the same and the male fans still love him too, but rock and roll is a sexy style of music and it all goes hand in hand.”