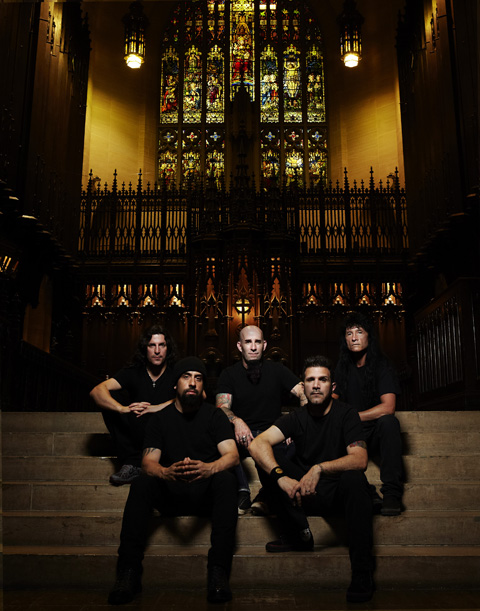 The road to Worship Music, Anthrax’s 2011 masterwork of an album, was such a treacherous path for the New York City thrash metal group that at a few points in its multiple-year development, it seemed as if the album would never see the light of day.

But now, more than 10 months after Worship Music’s release, the band is so fired up about their accomplishment that when they join the traveling Mayhem Festival — a bill which also includes Slipknot, Slayer and Motörhead — they will be playing a special set intended to show their current strength. The set will be a bare bones, “guerrilla” performance,  high-energy, non-stop barrage of one hit after another, no lulls, no filler, playing at supersonic speed.

When The Marquee spoke to the band’s guitarist and de facto leader Scott Ian back in 2006, he told us the band was “trying out” a few new tunes. That interview took place shortly after the band had welcomed back their most recognizable and relevant frontman, Joey Belladonna, and were playing some small club “reunion” shows to prime themselves for their participation in the then upcoming “Big Four” shows with Metallica, Megadeth and Slayer. Belladonna would part ways with the band once again and then return to record Worship Music with Anthrax in 2011.

In early 2011, The Marquee spoke with Belladonna as he came through Colorado to perform a solo gig at Quixote’s True Blue (No, that is not a typo). At that time, Belladonna said, “Well, regardless if you want to compare versions of the band — because John was in the band for awhile and people really started to like that — I think that coming back after all this time and being on top of our game makes it even more rewarding.” Belladonna is of course referring to John Bush, the former and current Armored Saint singer, who also did a lengthy stint fronting Anthrax.

It is important to note that before recording Worship Music with Joey Belladonna on vocals, the band had made an aborted attempt to record some of the songs with a relatively unknown singer, Dan Nelson.

Fast forward to 2012 and, as Joey Belladonna predicted before the album was released, the band members are in fact at the top of their game once again.

The band’s lead guitarist, and the co-producer of Worship Music, Rob Caggiano, in a recent interview with The Marquee, talked about how Anthrax finished this seemingly endless project and reclaimed their spot as one of the most enduring and important bands in heavy metal. “We started tracking the album in 2007 and the band was a bit unstable at the time, but we got pretty far. We actually got to the mixing stage and then we had to put the record on ice because we had no singer and we didn’t know if the band was going to continue. It was kind of a dark time,” said Caggiano. “But when we brought Joey back in everything started to happen really fast, his vocals just sounded killer and it totally brought the music to another level.”

To say that Joey Belladonna singlehandedly saved Anthrax from becoming a nostalgia act is a fun theory, but a bit of a stretch. In fact, the group thinks that the way they collectively approached the album contributed more to its successs than any one member. And the album has been a huge success for the band, even taking the honor of Metal Album of the Year by metal know-it-all Eddie Trunk and his crew on “That Metal Show.”

“One of my main visions for the new Anthrax album was to take it a step further than the last album [2003’s We Have Come For You All] and re-capture the classic Anthrax sound,” said Caggiano. “One of the things I did was make Scott [Ian] dig out his old amps that he had used on State of Euphoria. The result was that on one side of the spectrum you have the classic Scott sound and on the other side you have the band’s more modern heavy sound, and the two really blended well together and added to the overall vibe of the record.”

With the creation of one of their best records behind them, the band is currently focusing on their live show with the Mayhem Festival. Caggiano said with a laugh that what the hype of the special “guerrilla” set means is that Anthrax’s set will be “especially short… We have a 45-minute set and we don’t have time to mess around, it’s going to be a full-on metal show from the first note to the last. I’m not really sure exactly what the set is going to be at this point because different crowds react differently to different things, but I think there will be a lot of spur-of-the-moment stuff where we literally change the set list onstage during the show.”