Trending Stories from The Marquee
You are at:Home»Album Reviews»Buffalo Killers
By Marquee Magazine on July 1, 2012 Album Reviews, Brian F. Johnson 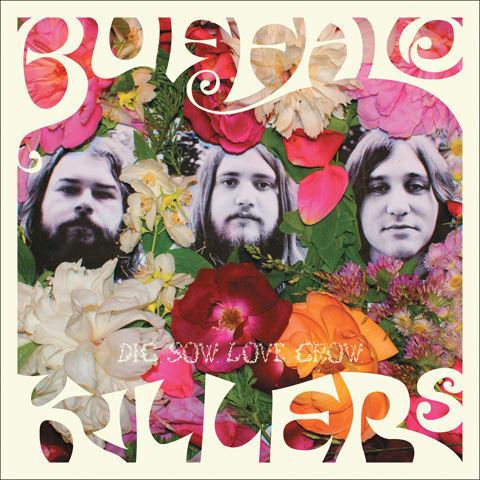 It’s been less than a year since Buffalo Killers released their third full-length LP, 3, and already, these big bearded bastards are releasing their fourth album, Dig. Sow. Love. Grow.

3 saw the Buffalo Killers at their most refined — an almost mellow album for the Cincinnati-based retro-psychedelic power trio — but beautiful nonetheless. In 2011, this critic said of 3: “I love the change of gears for 3 and could listen to it repeatedly [which, by the way, I have done a lot in the last year]. It’s  truly some of the Buffalo Killers finest work, but I hope album number four cranks it back up again.”

Well, I fished my goddamn wish! Dig. Sow. Love. Grow. sees the band absolutely stampeding back to their raucous rock sound, but it also goes the extra step by showcasing both the majestic side of the Buffalo Killers, while managing to convey the overwhelming and unbridled power of the group.

The opening track “Get It” starts with a moment of heavy bass feedback that almost serves as a warning call before the herd begins its mighty gallop.

But track two begins to unveil the real joy of Dig. Sow. Love. Grow., emphasizing that it’s not one big sprint. “Hey Girl” almost sounds like it could have come right after 3’s opening track “Huma Bird.” But the second the final note of “Hey Girl” ends, the strength and rawness of “Blood On Your Hands” comes roaring back to knock listeners off their foundation.

Throughout the album, Buffalo Killers weave in and out of those different moods with grace and power.  This is a band — and an album — that is made for fat tube amplifiers and powerhouse headphones. If you buy this album digitally, spring for the flac recordings (or the highest bitrate you can get) and not just the run-of-the-mill mp3s. That extra quality from those files will show why the band is a perfect fit on the Alive Naturalsound Records label, which boasts artists from The Black Keys (who released their 2003 album The Big Come Up on Alive) to Lee Bains III, and the Glory Fires. In fact, Buffalo Killers’ second album Let It Ride was produced by Dan Auerbach of The Black Keys.

The band, which features brothers Zachary (bass and vocals) and Andrew (guitar and vocals) Gabbard, as well as drumming monster Joseph Sebaali, most certainly draws influence from a wide catalog of rock and roll’s elite. But Dig. Sow. Love. Grow. isn’t just another retro-sounding album that mimics bands of yesteryear. It’s a raw, real and commanding sound forged from grit that is as wide and expansive as the western plains, and is as mighty as it’s namesake. Simply put, it’s fucking awesome.                              — BFJ