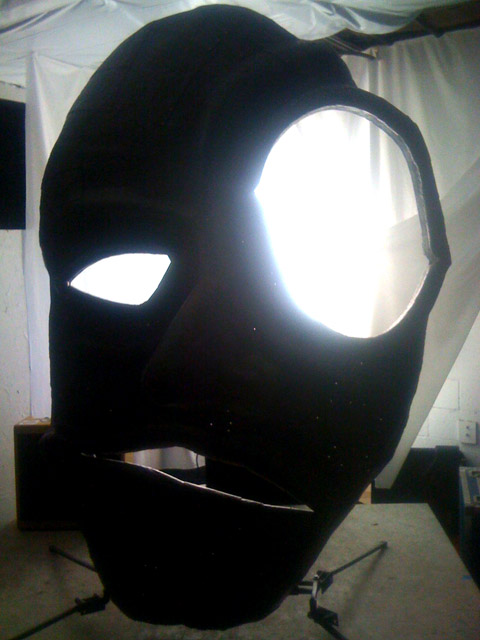 “TackleMeDown” was recorded, mixed and mastered by Bryan Feuchtinger at Uneven Studios in Denver, Colorado from June 2012 to July 2012.
The song is a pre-release from FaceMan’s upcoming album set to release February 2013 called TalkTalkTalk.

The song is dedicated to the memory of Phillip Bailey — the father of FaceMan guitarist David Bailey.
Bailey wrote The Marquee explaining how the song came about and the obvious parallels that the song drew to his own life, and his father’s final struggles against cancer.

My dad was a drummer that played loud, powerful music. If the music ever had a sensitive moment, my dad would figure some way to put some double bass hammers in there, or a super loud press roll. Funny to write about, but the music always felt visceral, which was a great and lively force in his music.
My dad was diagnosed with cancer in 2005. Steadily his health and strength declined. I got used to seeing him in his bed, fighting the side effects of chemo or radiation. Whenever we did play music, it was very short, like five minutes and then he would have to lie down. I knew he was dying.
The last time I played with him, he had tumors in his brain and couldn’t figure out how to tune his drums. Lugs were all over the floor. The man had played drums for most of his life, and had lost the basics of setting up his drums, let alone playing them.
We put him in hospice in the summer of 2009. Most of the time he would just lie there like at home, spacing out from the Morphine or the brain tumors. Then one day, he just got up. He just said “Fuck it, I’m going home.” While walking to the exit, of course, he was going to be restrained by an orderly or a nurse. So the first guy comes and can’t hold him back, calls for backup. Two guys together, no luck, he is still on the move. Eventually there are five guys trying to hold him down.
What would happen if he left? Would he make it home? He would probably die along the way. Or make it home in his stupor and die there. Who knows? But this man suddenly did not look like he was on his deathbed. He was strong again and fighting these five hospice workers, giving them a run for their money. You know what? I was rooting for him.
But eventually they gave him some sedative and he passed out. Probably best, I guess. But the whole situation was complicated. He died a while later.
When Steve [FaceMan] gave this song to us, it was coming up on the three year anniversary of this event. It immediately came to mind and became the meaning of the song for me. And when I wrote my part, this was where my inspiration was coming from. I knew Steve had no idea how I had interpreted his lyrics, and was I hesitant to tell him. But when we were working on the song in the studio, I felt compelled to share it and here we are.

Additionally, FaceMan recently performed a live set at UI Studios in Boulder, which was caught on tape, here: