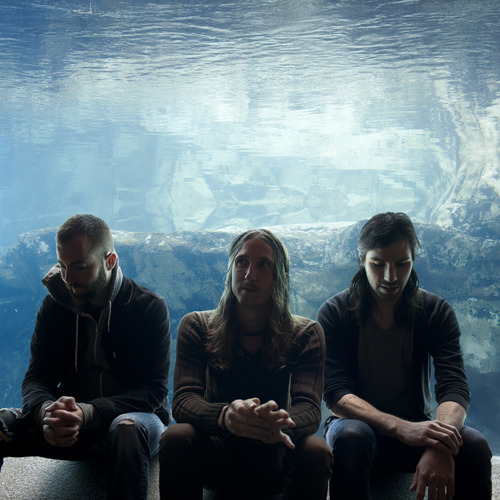 There’s something about watching a band you really like set up and tune their own equipment while a nearly sold out crowd waits in anticipation. On the one hand the thought arose, ‘these guys shouldn’t be doing this-they’re too good.’ Yet, at the same time it was great to see a band, whose power on stage enthralls the masses, have the humility and humbleness to tune their own instruments for sound check. Whether or not they choose to do this is unknown, but Russian Circles created frenzy as they set up their instruments, with the crowd watching, waiting for the music to begin.

The nearly sold out Bluebird Theater was a testament of the three-piece all instrumental band’s ability to draw a crowd especially on a Monday night. Once their tuning was done, they left the stage as ghostly as they arrived, without a word. The house lights continued to shine as an atmospheric melody played in the background, drowning out the house music and almost hypnotizing the crowd as they waited for the band to begin. As it grew in intensity, the lights eventually faded and the band emerged, quietly taking their instruments and beginning “309,” the nine minute first song off their newest album Empros. Fans of Russian Circles know they waste no time with the first song on their albums and of their sets. “309” comes out of the gate like a horse in the Kentucky Derby. Fast, strong and with a galloping beat that drives the all-instrumental outfit to a place of ethereal quality.

That a three-piece can create such heavy music which seemed to shake the very fabric of the building is a feat of its own. What Russian Circles may lack in vocals and lyrics, they more than make up for in creating a mixture of ever evolving dark melodies that slowly build to a climatic height and rattle your very being in the process. Reminiscent of other postrock instrumental bands like Explosions in the Sky and Pelican, Russian Circles have created their own way in the postrock world. Starting fast and heavy and keeping that tempo is something they do better than most of their contemporaries. Usually containing one song that is slower than the rest, which they did with “Schiphol” halfway through the set, a rift is broken in the world they create of head-banging ferocity to take the listener on a journey of ambient calmness. Yet slow is a relative term with Russian Circles.

The set had maybe eight songs total, with almost half coming from their latest album Empros, and the others being the best songs from their first three records Enter and Station and Geneva. “Carpe” and “Youngblood” were favorites that sent the crowd cheering as the first notes began. The whole show was a loud, heavy foray into rock instrumental bliss that eventually built to the crescendo that was their encore “Death Rides a Horse.” This song encapsulates what the Chicago trio brings to the table as musicians; intricate, fast-paced punch in the gut rock and roll.