Trending Stories from The Marquee
You are at:Home»Features»Midtown Dickens Leaves Carolina Home to Support Their Newest Album, “Home”
By Marquee Magazine on July 1, 2012 Features, Interviews 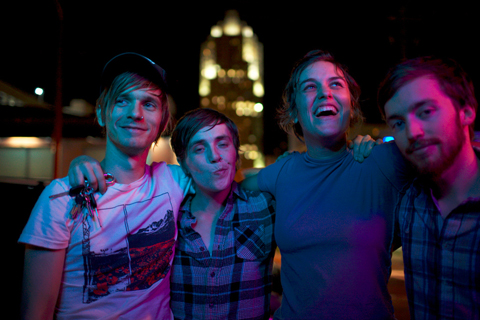 Midtown Dickens uses traditional instruments to pull the history out of the Southern soil on which they were formed. All of the bands members grew up in North Carolina and their roots run deep. The instruments may be traditional, but the collective world view of the band is not. Their “modern” ideas sprout new growth among the tall standing trees of tradition, and they are not overshadowed or kept in the dark by the old Southern order. This band has torn down the fences and spread their music all over the South, and now they are heading west to find fallow fields of listeners.

Midtown Dickens is a band of revolutionaries. Each member has varied levels of involvement in social justice, LGBT, human rights, organized labor, and community organizing movements. That’s the socio-political side of the band. But the musical background of the band is just as — if not more — interesting, and their grassroots approach to their art reflects the radical thought processes of their minds.

Home, the third and most recent release by the band, is a thematic work of textured folk and bluegrass sounds. It is not straight forward Appalachian roots music, but a modern and experimental expression of the band’s link to their heritage.

Catherine Edgerton co-founded the band with best friend Kym Register, and they originally composed music and lyrics as a duo. As Will Hackney and Jonathan Henderson have been integrated into the group, so have their ideas and creations. “We started writing the songs separately, which is a different process than usual,” said Edgerton in a recent interview with The Marquee. “We had compiled seven or eight songs, and then started looking for themes. We recognized home, and a re-definition of home, as a common theme, and we started adding on to it. We summed it up as home as an exploration of the way we fit into the world, how we create home and redefine it by pushing boundaries. So, each song either talks about a reflection of what home was for us as kids, that nostalgic home, or other versions of it. We all came up in North Carolina, so we really have this rooted sense of home in this space, all four of us. Some of the songs address our own internal explorations of being at home with ourselves. There are nods towards being totally untraditional in lots of ways, especially in terms of a nuclear family or a career.”

Midtown Dickens are the most untraditional keepers of tradition ever, and Edgerton is an example of that. Growing up near Durham, N.C., the same area that her family had lived in for generations, Edgerton was raised in a house full of music and that most endearing Southern tradition — storytelling. Her father, Southern fiction novelist and professor Clyde Edgerton, is also a musician. “Both within our communities and within our families, we were all blessed to be around music all the time. I think the influence of the area’s history has come into our art through osmosis. Being around music all the time is like being raised bilingual. I can say that music is part of my cellular makeup. The kinds of music I was exposed to all my life made their way into my soul and consciousness, and are breathed out through the music Midtown Dickens creates,” she said.

Ironically, though, while Edgerton always knew she was going to be an artist, she had no idea it would be in the form of music. “I took piano lessons when I was eight and really sucked at it. My dad gave me a harmonica in high school and I learned how to play that. I also learned a few guitar chords in high school as well, but I didn’t really start playing as a means of expression until I was out of college. That’s when Kym and I started playing music together. I think I had a really long incubation period with music. I really wanted to be an artist, a writer, a doctor, and a revolutionary. I wanted to be all kinds of things. I made a list of things I wanted to be when I was in college, and I couldn’t decide between them. The only thing I actually crossed off the list and didn’t consider was musician, because I didn’t know how to play anything really well,” said Edgerton.

Living up to her untraditional nature, Edgerton decided the one thing she thought she didn’t have the ability to do was what she would embrace. Collecting instruments from dumpsters and basements, Edgerton and Register salvaged the past and decided their future.

Edgerton is in a constant state of creation and motion, and every artistic medium joins hands in her life. “Visual art has been a strong part of my life since I was 15 or 16. My preferred medium is collage, so it’s all about taking in things around me and making them work together. I think that can be reflected in everything I do in life. I spend a lot of time building slowly in different areas, and look for ways to connect it all. It’s a similar thing with music,” she said. “These found sounds and found instruments are all a matter of being drawn to a particular scrap of something. My dad said something at the lake the other day, and it really stuck with me. ‘Chance happens to the prepared mind.’ He read it somewhere; it isn’t an original quote by him. That quote really applies to all that stuff. You need to have an open heart and willingness to explore all these pieces as they show up. Like banjos in dumpsters.”

• Lost In the Trees