Trending Stories from The Marquee
You are at:Home»Features»Quixote’s True Blue Resurrects Dancin’ In the Streets Festival July 3 & 4
By Marquee Magazine on July 1, 2012 Features, Festival Coverage 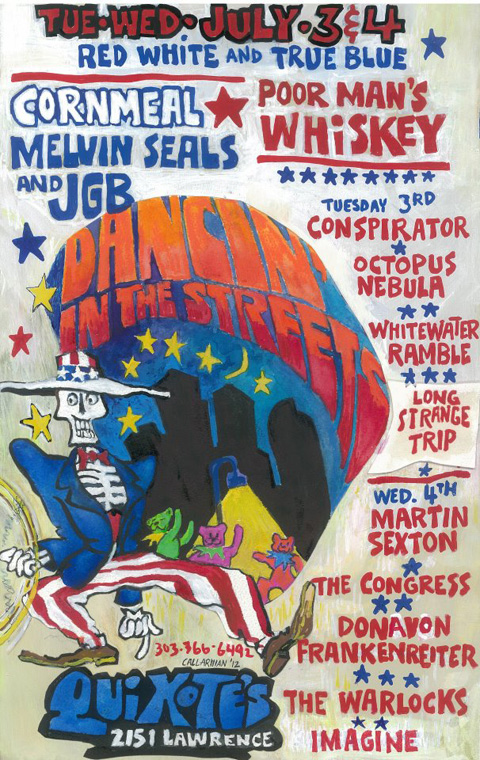 The Dancin’ In The Streets Music Festival has been resurrected this year, and it will be held in the Deadhead haven — Quixote’s True Blue. Past Dancin’ In The Streets were held on the 2700 block of Welton St., and were open air affairs, but this year some of the party is coming inside. Quixote’s newest location has two indoor stages and a stage outside on the patio, and all three will be exploding for the holiday festivities.

Spread over two days, the mostly jam band roster will consist of a total of 18 bands, with some playing both days. Tuesday is mostly bluegrass, with six of the nine bands belonging to that genre. If bluegrass isn’t your thing, it is going to be hard to avoid on Tuesday. Wednesday’s lineup is much more diverse, and features a couple of surprising names.

Dancin’ in the Streets is all about the jam, but there is enough diversity to make it appealing to just about everyone.

Blending genres and pushing boundaries, White Water Ramble takes traditional bluegrass to new heights. These seasoned festival scene veterans bring tons of energy to the stage whether grassing up covers or playing originals. Colorado grown and based, WWR will kick the festival off with drummed-up, jammed-out bluegrass.

Led by national flat picking champ and multi-instrumentalist Tyler Grant, Grant Farm is a must-see for music lovers of all kinds. There is plenty of jamgrass at this festival, and Grant Farm comes at the music with a more traditional approach. If you want to see the definition of “clean playing,” check these guys out.

No stranger to the Quixote’s stage, Melvin Seals and JGB have blown through Denver multiple times a year for decades, and always seem to blow the minds of Quixote’s patrons. Seals is a force of nature behind a Hammond organ and conjures a storm of soulful sounds sure to wake the Dead in all of us.

Quite possibly one of the hardest working bands in Colorado, Whiskey Tango is a band of brothers. These Denver locals seem to communicate via special powers as they weave their psychedelic jamgrass net, catching new fans every time they take the stage. If you have a hula hoop, bring it.

Todd Sheaffer is the driving force behind Railroad Earth and his solo sets showcase his songwriting and vocal abilities. As diverse as the fast-moving freight train of a band he leads, Shaeffer blends bluegrass with rock, folk and Americana. Shaeffer has a box car full of musician friends, and you never know who may join him on stage.

Poor Man’s Whiskey plays what they call “high octane hootenanny” music and they never seem to run out of gas. Their upbeat stage presence fuels the audience to take part in the show and makes sure you stay captivated once caught. Acoustic and electric instruments present the band’s eclectic influences with a fresh perspective.

Greensky Blugrass hails from Michigan, but are loved like a hometown band here in Colorado. Greensky leans towards Americana with their lyrics and towards rock with their distortion pedals, but they stay centered in bluegrass. This band will show you a different side of jamgrass, and might convert those who aren’t big fans of the genre.

The Big Wu started playing festivals almost 15 years ago, and their experience at moving crowds is well honed.  They produce a dance inducing roots rock rumble that pumps through the speakers with the same ferocity as their stage presence.

Wrapping up the festivities on day one, Conspirator mixes live instrumentation with digital sounds. Formed by The Disco Biscuits’ keyboardist and bass player, the band is filled out by drums, guitar and various weapons of electronic destruction. You may see some “Spirit Hoods.”

Smooth Money Gesture is rooted in rock and roll with elements of funk, bluegrass, metal, and electronica. Their psychedelic jams and improvisational grooves find a majority of the members contributing to vocals and everyone struts their stuff on solos as well.

The Congress is made up of three southern good old boys whose only goal is to steamroll a room with down home rock and roll. A true power trio in every sense of the word, they have a driving ’70s rock sound that is raw and rowdy. This is not a jam band; this is a rock band that can jam.

Bouncy and bright, Fatty Lumpkin is a Texas trio that doesn’t see any boundaries in music. This band will give you sounds that you might not hear from other performers at this festival including jazz, funk, ska, afro-beat, New Orleans swing and blues.

Donavon Frankenreiter will be the act farthest from home on this bill, but his simple surf folk-rock travels well from Hawaii. The wonderfully-’stached long time friend of Jack Johnson released his debut in 2004 on Johnson’s label, Brushfire Records, but in 2010, after having left Brushfire for Lost Highway, Frankenreiter started his own label Liquid Tamborine Records. He subsequently recorded and released his fourth studio album of original material entitled Glow.

Sexton draws from soul, R&B, gospel, folk, rock, country and blues to create well written and powerful songs. His unique genre bending approach, wide vocal range and stellar guitar playing allow him to come up with extremely diverse material. His songs are not only unique from each other, but from anything else out there.

:: Postcards of the Hanging ::

Postcards of the Hanging is a local Bob Dylan tribute band made up of musicians from various other projects. They cover songs from every period of Dylan’s expansive catalogue, and might just play a tune you have never heard before. True “Dylanologists,” these musicians play his work with a deep understanding.

Chicago-based Cornmeal cooks up progressive bluegrass that they have been dishing out for over a decade. They play fast and they play hard. What makes this band stand out from other groups in the genre are the precise harmonies. They may play fast, but they don’t let things get sloppy.

The festival will also feature late night sets. Admission to these sets is not included in the festival ticket price. Late night sets on July 3 include Octopus Nebula and Cornmeal and on July 4 feature Poor Man’s Whiskey with special guests, JGB, and Imagine.