Trending Stories from The Marquee
You are at:Home»Joe Kovack»The Avett Brothers Raise Over $50,000 for the Colorado Fire Relief Fund
By Marquee Magazine on July 10, 2012 Joe Kovack, Music News 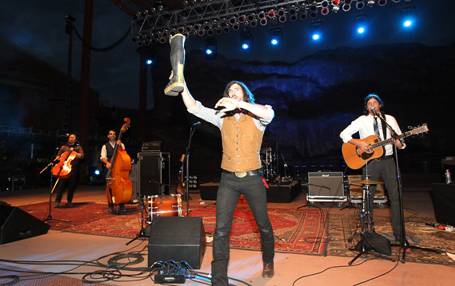 It has been a rough month for Colorado with intense heat and nearly a dozen wildfires threatening people’s homes and destroying the beautiful land we call home. Last week at Red Rocks the Avett Brothers lent a helping hand.

With a nudge from Denver-based AEG Live promoter Don Strasburg, the Avett Brothers used their sold out two-night stint at the legendary Red Rocks Amphitheater to help out those affected by the devastating fires. It would be easy for a band to just merely say few words during their set, without taking action, but the Avetts took a step further by donating tickets to KBCO for an auction with backstage passes to meet the band and Colorado governor John Hickenlooper. Stopping each show after the second song and to holding up a black firefighter’s boot, lead singer Scott Avett would pause to say few words for the those affected by the fire, and ask graciously for everyone there to donate what they can in aid of those in need.

Each band member put cash in the boot before AEG volunteers would hike the stairs to send the boot through the crowd. “The generosity of the audience was amazing” remarked Avett in a recent press release. Along with the Avett’s help and the generousity of the audience, over $50,000 was raised and donated to the Red Cross and the Colorado Fire Relief Fund 2012. Following the Avett’s lead, Blues Traveler and the String Cheese Incident also “passed the boot” during their shows to help raise money for the Colorado Fire Relief Fund.