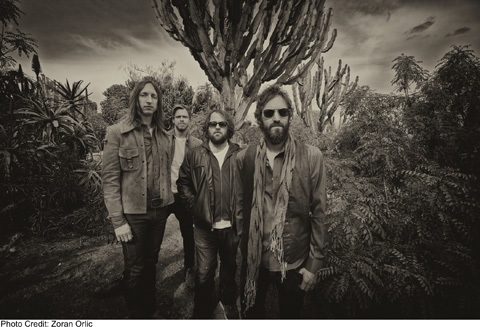 In late June, Everest’s frontman Russell Pollard found himself less than a week away from releasing the band’s newest album Ownerless on ATO Records, and just days away from launching a month-long tour that would stretch from Maryland to Vancouver.

On the day the album was to start being shipped he was pegged with the question, “If you could go back and make one change to the album, what would it be?” Luckily, Pollard was able to answer with confidence, “I wouldn’t change anything. I think everybody in the band would agree with me on that — which is just shy of a miracle,” said the lead singer, guitarist and drummer for the band.

Ownerless is Everest’s third release since the band’s inception in 2008, but Pollard explained that in many ways, this album felt like it was their first. “The main difference [between Ownerless and our first two albums]is that we actually found our sound on this record,” said Pollard in a recent interview with The Marquee. “Ghost Notes [the band’s first release, in 2008]was the result of our desire to play together and to try to make a record together. So we pulled basically every song we knew for that one record. We hadn’t played much live together and we got into the studio and started working it out. Then we hit the road and came back with On Approach, which we named because we felt like we were getting there, but not really there yet. I’m still proud of those records and feel good about them, but to me, this record sounds like a band that has spent a lot of time together and gone through a bunch of shit together and come out on the other side with a sound.”

A big part of finding that sound, according to Pollard, came in the form of freedom. The band was between labels while working on Ownerless, having been dropped by Warner Bros. For the first time in the band’s history, they found themselves able to make decisions about their music without a label executive hanging over their shoulders.

“Being free is the message here. With a bit of defiance,” Pollard said. “We made the record and decided to name it Ownerless because we were truly feeling unowned by anyone. Like, free, in the best way. We had no A&R, no management telling us to change. We were completely free and I think that is very important to how it turned out,” he said.

Another facet that Pollard gives major credit to, are the co-producers Richard Swift and Rob Schnapf, who each worked on separate songs on the album. “Richard does one thing and he does it really well. It’s a very minimal setup — a 16 track machine, a couple of microphones, a reverb unit and the band in the room. It’s more about what his energy is and how he makes you feel as a musician in the room with him than it is about the gear or the process, and I really wanted that, he pulled a lot of cool stuff out of us,” Pollard said.

But when it comes to Schnapf, Pollard said that he went above and beyond the role of producer. “He was our coach, our friend, our co-conspirator, our musical inspiration,” Pollard said.

Pollard added that the diversity of the tracks on Ownerless absolutely necessitated different producing styles. “‘Raking Me Over The Coals’ needed Swift’s production, whereas with ‘Rapture’ I needed Rob’s production to make it sound the way it sounded in my head,” he said.

Through the nine month process of recording the album (while also being on the road within that time frame), Everest grew as a unit, struggling — albeit happily — to get through without the label support they had seen from their earliest days. It was as if the band was collectively taking the musical-montage walk by the lake that is in nearly every dramatic film. “Well, that happens all the time with us, really” Pollard laughed. “But, it was scary. Financially it was hard. We were struggling to get the record finished on our own dime and still trying to pay the rent. It was taking over our lives and was all consuming, and nobody was paying the bills. But, it didn’t feel like we were abandoned,” he said.

Pollard didn’t trash W.B. for their role, and said that it was an amicable split between Everest and the label, and that the band was thrilled to have ownership of the songs that they had recorded there, but he did say that Warner hadn’t hopped on board with them the way they had hoped. He said that when they released On Approach there was little support, “just a little spark out and then it was done.”

But now, aligned with ATO Records, and with an album that Pollard thinks is the most honest and true sound of Everest yet, the band is feeling success in a different way. “We’ve been playing the album live front-to-back as our set list and it’s the best set we’ve ever put together and happens to be the sequence of the record. All of that coming together feels like a discovery. We’ve discovered something amongst ourselves,” he said.