Trending Stories from The Marquee
You are at:Home»Features»England’s Steel Pulse Hops the Pond for 25th Anniversary of Reggae on the Rocks
By Marquee Magazine on August 1, 2012 Features, Interviews 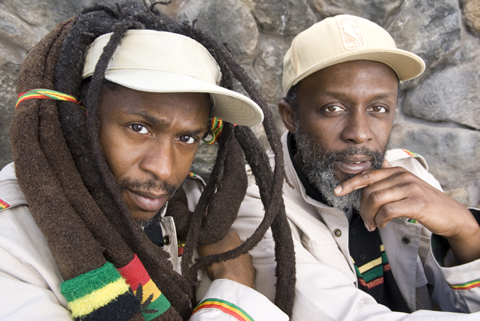 Reggae music sprang out of Jamaica in the 1960s, and global exposure can be attributed to the worldy known and renowned Caribbean acts such as Bob Marley and The Wailers, and Peter Tosh. The “king’s music” as it is referred to by some, grew out of more traditional forms of Jamaican music, and artists spanning the globe have forged their own unique interpretation of these island grooves, while remaining connected to the roots of the genre. One of the most well-known reggae acts to form outside of Jamaica is the British group Steel Pulse.

Steel Pulse was formed by British born youth of Jamaican and Caribbean decent in the Handsworth neighborhood of Birmingham, England in 1975. By that time, reggae had firmly taken hold in Jamaica and beyond, and these students at The Handsworth Wood Boys School tapped into their island roots and created a sound that reflected the mood of their own isle.

The Marquee recently caught up Steel Pulse founding member David Hinds while he was sitting in his home in England, and Hinds schooled the magazine on how the “Handsworth Revolution” began.

“Our parents originally came from the Caribbean,” said Hinds. “And as you know, Jamaica was once colonized by Britain. After World War II, a lot of Jamaicans and people from other British colonies came over to basically rebuild a country. During that transition, they migrated with the latest form of music. At the time — in the ’50s and ’60s — the bluesy music and mento were popular. Mento is early Jamaican music that was played with primitive sounding instruments that were made very crudely, deriving from instruments they saw from the United States and the rest of the western world. Then the music transformed into blue-beat and ska. After ska, came rock-steady, where the beat was accented on a different part of the groove. Then it slowed down into reggae, and then it came down into ‘one-drop,’ which everyone became familiar with through Bob Marley’s music. Songs like ‘Natural Mystic’ or ‘Crazy Baldheads,’ all that’s the one-drop. It’s all part of reggae, and that’s how we got exposed to the music, the fact that our parents came from Jamaica with the earlier forms of music, we just grew with it.”

Steel Pulse built off of those sounds and added a totally different flavor to the reggae that was coming out at the time. Not having the laid back vibe that was floating from the islands, Steel Pulse created a way to express the realism of a tense urban environment, yet kept an aspect of hope connected to Rastafarian and Caribbean culture. “Handsworth was made up of people from Jamaica and the Caribbean, and we were isolated from the white neighborhoods, although Handsworth was originally a white neighborhood. It was one of those cases where as more people came from the Caribbean, more whites moved from the neighborhood. Then eventually Handsworth became a neighborhood made up exclusively of Asians and those from the islands. As a result, there was a climate of hostility, but it was more of an undertone, no one outwardly expressed their racism there. From time to time it would be out and out expressed, but as kids, we weren’t exposed to the level of racial abuse other people were going through in other places. We had a feeling of not belonging to England, even though we were born there,” said Hinds.

That feeling of separation from their own country aligned Steel Pulse with other more revolutionary music scenes, like the punk explosion in England in the late ’70s. “Punks saw the system for what it was, and they wanted retaliation. After a while, they amalgamated with the reggae acts. Punks picked up on anything that was ostracized. Reggae music wasn’t played on the radio; no black music was accepted on the radio. Punks decided to have reggae bands as opening acts for them. It was their way of getting back,” Hinds said.

The punk scene helped get Steel Pulse on stages that wouldn’t normally have hosted a reggae act, or any “black” act, but it was their intellectual and honest approach to the music that propelled them to reggae legend status. Hinds has always kept lyrical content in the forefront, and the message the music conveys is his main goal. ”I would say the message makes up 80 percent of the music for me,” he said. “Put it this way — when we started the band, fortune was the furthest thing from our minds. We didn’t even think of that. We just thought we had something to say, and wanted to get a chance to say our views. It became natural for us to explain ourselves without worrying about consequences, ya see.”

Hinds said that Steel Pulse has been working on their first album in eight years, and that the lyrical content is still the most important aspect of their music. “It’s got a lot of diverse subject matter, but at the same time, is kind of under one umbrella. I won’t disclose the title. There is a track on there called ‘Natty’, which has to do with being a Rastafarian and having dreadlocks, basically, and to be proud to be wearing them and that kind of stuff. There is also a track titled ‘Shame and Crime,’ and that’s about betrayal, basically,” said Hinds.

Steel Pulse albums have not only always conveyed a powerful message, they also are written conceptually. A listener can put on True Democracy and it is almost impossible not to listen to the album as a complete work. Hinds realizes that music is listened to differently now, but also assured us that the new album is in true Steel Pulse style. “The music is so diverse now, with the internet, iPods and iPhones. Albums used to be conceptual, and you would sit down and listen to an entire album by one artist from start to finish. The whole album was always based on content. Today, music is not like that. Now it’s about making a hit,” he said.

Steel Pulse has never let the norm steer their path and they have always taken the revolutionary aspect of reggae music very seriously. Part of that is continually working at it. “There is no such thing as time off,” Hinds said. “There are a lot of other projects that I’ve got going on. I just finished a track on Easy Star All Stars’ new album, Thriller, which is a tribute and remake of Michael Jackson’s album. I sang Paul McCartney’s part on ‘That Girl Is Mine.’ And, of course, we start tour soon, and will be coming out to Colorado to play Reggae on the Rocks.”