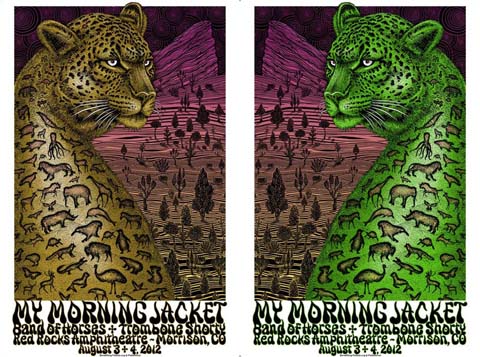 I hate to paint myself into a corner — to make any sort of blanket statement that might later come back to bite me in the ass, but here goes: My Morning Jacket is currently the world’s best rock and roll band.

No one out touring right now, comes close in matching their power, their presence, their catalog and their ability to so effortlessly switch from soft acoustic ballads, to heady, out-there explorations, to bombastic rock and roll that you feel in your gut (sometimes all in the course of one song). They are all insanely good musicians, who, after so much time together are fully in their prime and have hit their stride in spades.

Think I’m full of shit? Prove me wrong. If you can find me another band anywhere in the world that can top them, I’d really like to see it. I’ll need two plane tickets, a hotel room and two VIP passes to the show. You can shoot them right over to my PO Box. If anyone can top the Jacket, I’ll retract my earlier statement and bow in defeat. No, seriously, literally, I will bow.

Friday’s overcast evening kept temperatures down at Red Rocks, but attendance was also, quite surprisingly, down on Friday as well, with the crowd (at it’s peak) only filling about two-thirds of the stands. But this ain’t the Jacket’s first rodeo, and the group knows how to saunter into a two-night run. The first part of Friday night’s show was an admittedly mellow event for the group. Still mellow for the Jacket is like driving a Ferrari though a school zone. You don’t forget — even for a second — that the power is there.

The group fired off selections from a huge range of their discograpy, dipping into everything from 1999’s Tennessee Fire up through last year’s Circuital. While this band is by no means roughing it van style on the road, playing every night, My Morning Jacket has been very consistently on the road since Circuital’s release and the time together with this material shows.

Even when Jim James had guitar rig issues during the show (and he seemed to have a few on Friday), the group hardly blinked. At one point, when James’ rig really seemed to take a turn for the worse, drummer Patrick Hallahan immediately lead the group into an extended spacey and funky introduction to “First Light.” There was no discussion about it, no words spoken, just James signaling once with a finger to keep going. That serves as one of My Morning Jacket’s most obvious strengths — they look at each other a TON when they play. Multiple times throughout the weekend, the band would huddle up around Hallahan’s kit, as if they were re-centering their energy, and that energy was palpable.

Both nights of the run saw a good chunk of covers, and the Jacket’s way of handling other people’s songs is a thing of marvel. On Friday, they did a supremely gorgeous version of Elton John’s “Rocket Man,” (which fits so well with James’ voice) followed only a few songs later by one of the show highlights, “Tyrone,” originally by Erykah Badu. The funky-ass “fuck you” song, was smooth as silk, and James singing the lyrics “Every time you come around you gotta bring Jim, James, Paul and Tyrone,” was as solid as it was hilarious.

During the six-song encore, the Jacket dropped as much heavy bass on “Victory Dance” as any EDM band that’s played Red Rocks this summer, and they capped the night was a moving version of “Gideon.”

Friday was a phenomenal show, as strong a show as you could hope for, but compared to the Saturday, Friday was just a long warm-up.

Saturday’s blistering three-and-a-half hour set started with James circling the wagons before the excursion with the line “At dawn, they ride!” This show was crucial. In fact, this show ended up giving me homework as I have to now re-evaluate my top five shows of all time. It was truly that good.

The real magic here was taking the sum of the parts for the show. No song in the first part of the set was particularly out of the ordinary or mind-blowing. No song was played louder or much differently than before, but as the band went on, and on, and on, and continued to add layer upon delicious layer of icing, they all began to stack up into something more like a wedding cake, than an out-of-the-box Betty Crocker affair.

The 29 song set, in fact, didn’t really start to show itself as an award winner until half way through, when the band launched into “Mahgeeta,” an intense rocker that showcases lead guitarist Carl Broemel’s incredible depth. If my aforementioned out-there-on-a-limb statement that My Morning Jacket is the world best rock and roll band holds any water, than Broemel has got to be one of the world’s best lead guitarists, right? Yes, he is, but saying that takes away from the multi-instrumentalists other talents, and a few songs after “Mahgeeta,” Broemel showed that with one of the best songs of the night, “Dondante.”

The seventeen-minute plus version of the song showed that the Jacket has been tinkering with songs on the road, and at the point where Broemel would normally unveil his sax work, the band kept stretching the song, while James repeatedly whispered “Everything changes.” Change they’ve embraced, indeed. I had just scribbled in my note pad, “no sax?,” when Broemel finally went over and picked up his horn and belted out a solo that was almost tear-provoking in its beauty.

(By the way, random digression — the next time you drive through Glenwood Canyon along I-70, I highly, HIGHLY, recommend playing “Dondante” from the band’s live album Okonokos at top volume with the windows down. The sax solo almost echoes off the canyon walls and it’s one of the best location-to-tune ratios ever. Start the song before you enter the canyon to make sure you hear the end of the song while still in the canyon. Trust me on this. End of digression).

(the sax solo is cut off in this recording )

Two songs later the Jacket tackled The Band’s “It Makes No Difference,” and it was hard not to draw comparisons to the Robbie Robertson group of the seventies. Maybe Broemel is the Robbie Robertson of 2012 — understated at many times, but able to completely and effortlessly pull out all the stops at others. While Broemel might lack the stage flair of Robertson at times, I dare say that Broemel probably isn’t as coked out of his gourd as Robertson was back then.

The multiple song encore on Saturday started slowly with the acoustic “Bermuda Highway,” but three songs in, My Morning Jacket played an incredible version of “Oh Sweet Nuthin’.” It’s my ear worm song of late that I can’t get out of my head and I listen to it almost incessantly, but I have focused on the Black Crowes renditions of the song. I had no idea the Jacket had even incorporated it into their set. This particular version was, I believe even better than the Crowe’s version from their 2009 Cabin Fever DVD and that’s saying a lot.

The band could have ended the show there, and made everyone happy. In fact, I think they could have ended the show with “Run Thru” several songs sooner and no one would have questioned it, but they kept going and even brought out John Oates and members of Trombone Shorty to play the Curtis Mayfield song “Move On Up.” The additional power that the horns provided gave rise to the question of “why wasn’t Trombone Shorty featured on more songs throughout the set?” Again, though, everything changes, and the Jacket has done shows with horns sections before. Time to switch it up again.

The band capped the two-night run with their standard closer “One Big Holiday.” It was that song, played at 2004’s Bonnaroo, that seemed to break the Jacket and it’s a killer, amazing song. Now that it’s such a standard though, it almost feels like they “needed” to play it, and if that’s the case, then in Jacket form, they needed to play it better. They did. As the crowd shouted along, the band turned everything up to 11, and just brutalized the sound system with a hard rocking version of the song. (Not that they could really play it any other way, but there was intense power behind this particular rendition).

It was 1 a.m. by the time the lights finally came up on Red Rocks. Three-and-a-half hours had passed, 29 songs had been played and the crowd, completely spent slowly filtered out. It was everything and more that I expected.

Thank you, My Morning Jacket. Thank you.

Side note: On Monday, August 6, The Jacket released a new video of “Outta My System” that features a cartooned Zach Galifanakis as a wizard.