Trending Stories from The Marquee
You are at:Home»Features»NedFest Soldiers On For Its First Year Without Its Founder
By Marquee Magazine on August 1, 2012 Features, Festival Coverage, Leia Larsen 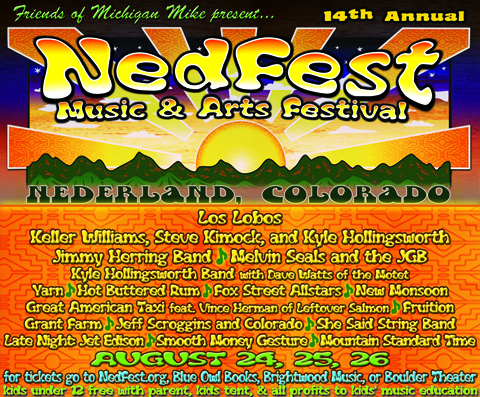 In late 2011, NedFest lost its founder, and many thought that would be the end of the festival that “Michigan Mike” Torpie had grown over the last 13 years. Now, under the direction of a non-profit named Peak to Peak Music Education Association, Ned’s headiest festival will continue and from the looks of it, Torpie, as well as his departed dog Mountain Girl will be smiling down over the baseball park in Nederland the weekend of August 24 – 26.

Grant Farm, the self-described “harvest of a band from the fertile Front Range of Colorado,” brings a countrified twang to the jam scene. The stellar guitar work of renowned flatpicker Tyler Grant is the driving force behind the band’s down-home sound, recalling some of the more southern infused Widespread joints. The tunes have a driving, rollicking feel, pushed forward by forceful-but-not-overbearing drummer Chris Misner.

“Grooving,” “Americana,” and “rootsy” might get thrown around when describing Yarn. From top to bottom, this sextet has little weakness. The Allman Brothers-esque guitar work, the subtle down-and-dirty vocals, and the kick drum-driven rhythms all come together to form one excellent, bluesy band. Yarn has developed a dedicated following in its five year run, and rightfully so. The group’s 2012 release Almost Home is a lesson in nuance and execution.

When some folks think of Nedfest, the image of jam bands flinging licks around with reckless abandon pops into the head. The Fox Street All Stars see that jam and raise it with some funk. Bluesy, brassy, sexy and sassy, Denver’s pride brings a different flavor to the stage. Backed by a high-flying horn section and some seriously gritty guitar work, Fox Street are a welcome change of tone from their Nedfest brethren.

This ain’t Jimmy Herring’s first rodeo. Let’s be real, the man’s been around the music block enough times to make the most wandering of minstrels feel like a homebody. Currently the lead guitarist of everyone’s favorite Georgia jam band, Widespread Panic, Herring brings his unparalleled six-string virtuosity to the mountain stage. While Herring does indeed jam with the best of ’em, his style is his own – jazzy when he wants it, bluesy when he needs it, and spectacular when he damn well feels like it. The man’s music is a treat on every level.

From his celebrated collaboration with String Cheese to his current Travelin’ McCourys sojourn, Williams adapts to his musical surroundings like a chameleon. His twelve string work is untouchable and he somehow manages to bring his own unique, eclectic flavor to any song, project or jam on which he works. His catalog is overflowing and while he just released his 17th album Bass in 2011, he has already followed that with his 18th, Pick, which features the Travelin McCourys.

It might be tempting to say that anything Vince Herman touches turns to musical gold. But that would be disingenuous to his musical genius. Herman and co-founder Chad Staehly have been driving the Taxi for many years now, sometimes with finesse and sometimes with the crazed speed and reckless abandon of a New York City taxi driver. And, also like an N.Y.C. cabbie, the band drives through a myriad of environs with each show. From Americana and country-flavored songs, to jammy, bluesey and bluegrassy numbers, the group is an amalgam of different genres that has the ability to weave in and out of those musical neighborhoods effortlessly.

When Nedfest originally kicked off back in ’96, the idea was to unite marquee national acts and local gems with less-recognizable names but comparable musical ability. This year, Nedfest unveils Los Lobos as the “surprise” headlining act of 2012. Festival organizers kept the mystery headliners under wraps due to a previously scheduled show in late July, but it seems the wait, and the accompanying buzz, has been well worth it. A certified pillar in the music world, Los Lobos has seen an unrivaled run of success, enjoying accolades from both music aficionados and the “establishment” (including multiple Grammy awards).

Bucking tradition can be a good thing. But there’s a reason tradition exists to begin with. In the case of Melvin Seals and the Jerry Garcia Band, tradition is upheld while they simultaneously throw caution to the wind. Seals and the JGB maintain a respectfully close proximity to the band’s original namesake. Of course, Seals’ own ivory-tickling aptitude adds spicy variety. Extended jams are a must, and although Garcia’s melodic noodling can never be replicated, suffice it to say that there is no shortage of killer fret work.

Fruition is one of the few bluegrass bands featured at Nedfest that isn’t known for progressive or jam-style tunes. Instead, the Portland, Oregon band is characterized by strong vocals and an adherence to traditional Americana roots bluegrass. Fruition is no stranger to the Nederland music scene. They’ve played with members of Ned-grown bands like Leftover Salmon and Elephant Revival. They’ve surprised the town with the occasional impromptu concert and they’ve developed quite a following with the locals.

New Monsoon is difficult to nail down. The Bay Area-based band describes itself as an experimental jam band, but they cover a profusion of genres including world, jazz, trance and progressive rock. They bridge this gamut with guitarist Jeff Miller’s dynamic solos and a strong rhythm section. New Monsoon’s rocking jams have made them a favorite at outdoor music festivals, and this year they make their first appearance at Nedfest since 2008.

San Francisco-based Hot Buttered Rum frequently visits Colorado and the band is no stranger to Nedfest. Since releasing their first album in 2004, Hot Buttered Rum has made a distinct transformation from a bluegrass string band to a high country rock group. With the addition of drums, keyboard, saxophone and flute, HBR now features grooveable tunes with upbeat energy and an occasional calypso-esque vibe.

Kyle Hollingsworth and Dave Watts have worked and toured together since the Kyle Hollingsworth Band released its latest album Then There’s Now in 2009. The two share an appreciation for Afro-Cuban inspired beats and an unbridled energy onstage. Cutting his teeth as the famed keyboardist for the String Cheese Incident, Hollingsworth’s solo effort has refined a jazz/ambient/funk sound that is a bit more honed than SCI’s famous extended jams. His mellow vocals and ephemeral melodies are rounded out by Watts, who is best known as the founder and drummer from the funk band The Motet. Watts’ resilient beats are especially notable in tunes like “Phat Cat” and “The Way it Goes.”