Trending Stories from The Marquee
You are at:Home»Album Reviews»The Giraffes
By Marquee Magazine on August 1, 2012 Album Reviews, Brian F. Johnson 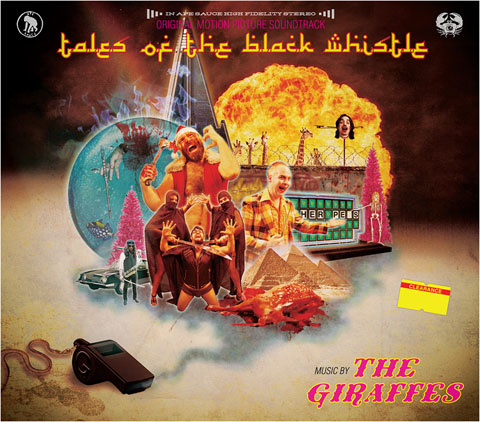 Two years ago, the Brooklyn-based quartet The Giraffes played their final concert at Denver’s Bluebird Theater, and fans of hard music and hard dick jokes everywhere wept. Few in the audience (and even only a few of the band members) knew at the time it would be their last hurrah, but before the pools of beer dried on the stage, the announcement was made that lead vocalist Aaron Lazar was pulling the plug to work on his own new project (selfish prick).

Following that, the band entered an odd state of limbo. They officially released their album Ruled, which they had finished before Lazar’s departure,  played an occasional show around New York without their vocalist, and offered little information to fans about the future of the band, or even the details of these sporadic shows.

But this month, The Giraffes have re-emerged with a different lineup and with a new album, Tales of the Black Whistle. In typical Giraffes fashion, there wasn’t a lot of fanfare about the release. The group simply started posting short videos and trailers of a movie by the same name — with cameo appearances by the band members — which, not shockingly, is centered around a large black whistle in the shape of a giant penis.

The album is, in fact, a soundtrack to the film, but also stands on its own as the first set of original tunes released by the band since Lazar departed the group. Lead guitarist Damien Paris said in a brief phone interview with The Marquee that he’s not sure if the film “will ever see the light of day,” but one report has stated that it could be released on Halloween of this year.

In the early days of The Giraffes (before Lazar joined the group) much of the music was centered around instrumental surf rock with tones of spaghetti-western psychedelia, and Black Whistle sees the group returning to that style, but this time, instead of Paris attempting to sing, the band is joined by Brianna Wanlass and Kimberly Paige Valor (aka “The Rigelettes”), who provide etheral harmonies, but no true lyrics on the songs.

Paris, who plays upside down left-handed guitar, once told The Marquee, “The only thing I take serious is that I’m going to practice so when I get on stage I can get up and do whatever I fucking want to.” With this return to old school Giraffes psychedelia, Paris’s work shines, as he absolutely throttles the neck of his axe, particularly on the song “Time Camel” where he plays about five billion notes per measure. Giraffes co-founder and former DIY Network host Andrew Totolos, along with former Denver resident Jens Christensen on bass, provide a solid canvas of rhythm for Paris that results in a soundtrack perfect for a peyote trip in the desert or to whatever the hell kind of movie that would allow, let alone encourage, this bunch of misfits to participate.

Lazar’s vocals are missed, but not sorely missed, as this chapter of the band opens up a new world of possibilities, and of course, a whole new round of off-color jokes, 99 percent of which center around dicks.   — BFJ