Trending Stories from The Marquee
You are at:Home»Derek Miles»Idlewhile Prepares to Release a Series of Eps
By Marquee Magazine on September 1, 2012 Derek Miles, Features, Interviews 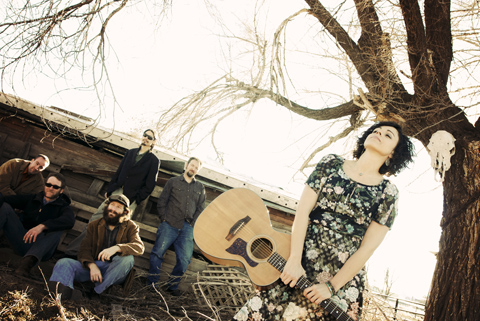 Their name might conjour images of lounging on a couch on a Sunday afternoon, or just kind of kicking around aimlessly, but for the Longmont-based six piece Idlewhile, kicking back isn’t really the focus, at least not until they’re on stage.

“We’re just about as busy as we can handle,” said Steven Phoenix (guitar/vocals) in a recent interview with The Marquee. The six piece band features Phoenix and Giselle Collazo (guitar/vocals/keys) as the core of the group’s creative engine. Together, they are responsible for nearly all the original material, with Collazo being the lead vocalist and primary songwriter. Equally important to the band’s sound, though, are members Miguel Ramos (violin/keys), Matt Lawlor (drums/banjo), Paul Tedesco (upright bass), and newly added Seth Goodman on mandolin.

Collazo explained that the idea for forming the band began to develop over holiday breaks and free time spent singing and strumming tunes with friends. And the laid back atmosphere also inspired the group’s name. “It’s symbolic of breaking away from the mundane, and preserving space for creativity,” said Collazo, during a separate interview with The Marquee.

Drawing from a rich musical pallet, Collazo works with a wealth of different styles in her songwriting. She was influenced by everything from Latin and soul to the Beatles and Simon and Garfunkel. Bob Dylan was also in heavy rotation. “It’s a head-scratcher if somebody can’t find some Dylan that moves them in some way,” Collazo lightheartedly said. She also likes to joke that she is the Puerto Rican who fell in love with Americana. That being said, her songwriting is lyrically driven with melody and the concept of storytelling being equally paramount.

And Phoenix said that between he, Collazo and the rest of the group, they treat their songs, not like tunes, but like kids. “Songs are like little children of ours,” he said. “We bring them into this world, try to raise them up right, and let them loose.”

Phoenix went on to say that the group also has a knack for transforming their own songs in message and emotion; like taking a song with a sad situation and turning it inside-out to reveal a positive message.

Collazo and Phoneix both agree that their songwriting style and organic approach is best delivered in a live setting. This reinforces Idlewhile’s objective of stepping outside the confines of everyday routine. The stage is the perfect vehicle for both artist and audience to escape, if only for a few hours. In fact, the band is so tapped into this idea, that they plan to release some live recordings in the near future.

The recordings will be released as a series of EPs with material culled from a performance at the Walnut Room in Denver last June. “We relish the live experience,” said Collazo. She enjoys the spontaneity of the stage as well as the excitement and challenge that it brings to their music. While acknowledging all of the successful studio music that has been produced, she values the stage chemistry that is sometimes void in the studio. “There’s lots of great studio music that we’ve all chewed up and digested into our nerve fibers,” Collazo said.

Phoenix added, “There comes a point when you’re playing to the click, trying to keep it all metronomic and it sort of kills the soul.” It’s clear that live performance remains preferable and it is what the band endorses wholeheartedly.

There is an admirable sincerity that this band exudes; it comes across in their motivation and artistic vision. Their modest outlook and genuine intention is embedded in their music. It is these attributes which will gain respect from listeners. In a world where originality seems to be going extinct like our prehistoric ancestors, it’s refreshing to see honesty in music even if uniqueness is admittedly scarce.

“The opportunity for something unique is more in what words you use, what textures you use, how you arrange it, and how you relate to your audience — even if it’s something that’s been said before, if you’re sincere and you’re adding something to it, it colors it in a different way,” said Collazo. “It stands on its own. There’s always been something before, everything is derivative.”