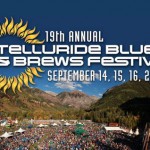 The 19th Annual Telluride Blues and Brews Festival didn’t officially kick off until Friday at noon, but I decided to start my music filled weekend getting down with Little Feat at the Bluebird Theatre in Denver on Thursday night. It was the best decision I made all weekend. (What was the worst? Not getting the number of the beautiful woman I danced with at Anders Osborne’s late night set before going out for fresh air and not being able to get back in because it was one-in-one-out.) Little Feat sounded like a band in its prime, its heyday, on top of its game. Paul Barrere was simply on fire, and he crop-dusted the crowd with his poisonous licks, giving absolutely everything he had-and then some! The only other time I had seen Little Feat live was in 1998 at Carter-Finley Stadium in Raleigh, and they were opening for Jimmy Buffett. The sound I heard fit well with the headliner’s upbeat “Caribbean Soul”, and it sure as hell made me dance-but it seemed to be missing the grime of the Little Feat I heard coming out of my speakers at home. Thursday night’s show gave me the down and dirty Little Feat sound I was looking for, and it felt like a proper roadhouse throw down. Little Feat outside during day-light is nothing like Little Feat in a theatre at night. To fully experience Little Feat, you need to be breathing the same stale air as them. A ripping “Spanish Moon” is what turned on the switch for the night, and a “Dixie Chicken >Tennessee Jed > Dixie Chicken” that lasted nearly half an hour and had teases of “Lively Up Yourself” “Scarlet Begonias” and “Jessica” blew the fuse. Little Feats Bluebird show was something special, and newer songs like “Rooster Rag” and “A Church Falling Down” fit right in. This is a new chapter for these 40 year rock and roll veterans, and quite possibly on of their best to date.

After too little sleep and too much whiskey, we hit the road for the seven hour drive to Telluride. Three music lovers with no way to play a CD or iPod in the vehicle, we thought with only spotty and lack-luster radio waves as our soundtrack, that the road trip would be lacking a key ingredient. After four hours on the road, we realized we never even attempted to find a radio station because we were consumed by enthusiastic conversation regarding past concert experiences, our awe of the ever changing geography out the window, and our nearly uncontainable excitement for what was to come.

Deciding to fully embrace the festival experience, we camped in Telluride Town Park-a stone’s throw from the festival gate. After setting up our home base for the weekend, complete with disco ball, light show, inflatable animals, and battery powered Christmas lights-we were ready for three days of mountain madness and monumental music. Nothing but smiles, I actually had all I could do not to skip through the gate, and we crossed the threshold right as Robert Randolph’s 4:20pm set started. Hot steel and steaming soul filled songs like “Good Times”, and the “Voodoo Child” closer tipped its hat to the blues.

Last year was a turning point for Blues and Brews, when they added more diversity to the line-up, immediately increasing the appeal. Let’s face it, just blues, or blues related acts only draw a small percentage of music lovers, and by changing it up, this festival now has not only become a “destination festival” drawing younger attendees from all over, it also represents the vibrant music scene we have here in Colorado. Most of the people I spoke to the week before leaving had no idea the line-up was a powerful and eclectic as it was, and had just assumed it was a strictly blues festival. Well, let it be known, these mountains rang with every sound imaginable, and they will continue to do so. Telluride Bluegrass may be the states most well-known music weekend, but if Blues and Brews can keep this up, we might have a new king of the hill!

Round two of Little Feat didn’t have the explosive quality from the night before. A 600 person venue filled with people who came to see their favorite band simply allows Little Feat to explore more, and really feed off the energy of the crowd. A sunlight/dusk set in front of 9000 people may have not had the same intensity, put we sure had just as much fun! I can’t tell you how many hundreds if not thousands of times I’ve heard Dixie Chicken, but that song still puts the funk in my feet at first note. Friday’s set gave us songs off of Rooster Rag we didn’t hear in Denver, like “Candy Man Blues” and “Just a Fever”, and it made me realize how much I am digging the new album and this exciting new chapter in the epic history of Little Feat. I think most of the other 9,000 or so people around me were on the same page…based on the sea of smiles and shaking hips.

The last set of the night on the festival grounds was played by The B52’s, and the crowd was filled with women in brightly colored wigs, white knee high boots, and 1960’s go-go dresses, ready to be judged for the costume contest. As weird as the set was, and as strange a fit as this band seemed, I realized it was simply about the fun factor. I may not have been blown away by the performance, but I sure sang along to “Roam” and “Love Shack”. The B-52’s have been doing their thing since the late 70s, and I had no idea just how broad their reach was. Still, they don’t grab me.

Telluride Blues and Brews has a late night component dubbed “Juke Joints”, and a single wristband allowed us access to three different shows. I wish I could say we bounced around a lot, and caught bits of everything, but we were under the spell of March Fourth Marching Band. This nearly 20 member band of giddy gypsies in full marching band regalia march to the beat of their own drum and put forth a performance like nothing I have ever seen. Two men on stilts, blaring horns, a funky marching band cadence, ass shaking grooves and audience made this late night set my favorite of the day hands down. Friday’s late night show, and what they did the rest of the weekend, made March Fourth one the most talked about bands of the festival.