Trending Stories from The Marquee
You are at:Home»Live»Photos/Review: Telluride Blues and Brews Festival Day 2
By Marquee Magazine on September 24, 2012 Live, Live Reviews, Photos 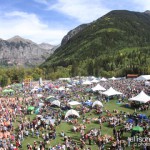 Oh boy, what a day! About half an hour before heading into the gates for a full roster of amazing bands, we found out the details of the “Grand Tasting”, which I knew involved the words beer and free, but had no idea just how big this part of the day was. Our campsite neighbors explained that we would be given a glass upon entering the gates, and then unleashed on over 50 breweries sampling their creations under tents for three hours. Yup, three hours of free Colorado Craft beer flowing out of taps and into the mouths of thirsty concert goers in the hot sun. I didn’t get to sample as much as I would have liked to, because the first three bands kept me right in front of the stage shuffling my feet in the sand, but I dipped away enough to to loosen me up for the nearly four hour dance party ahead of me. Each festival goer got to vote on their favorite beer, and this year’s winner was Eddyline Restaurant & Brewery from Buena Vista.

San Francisco based Monophonics took the stage at noon, and even though most people were in line for beer, they were all peering at the stage to see who was throwing out all that soul. “Sure is Funky” got the crowd moving right from the start, and the band kept up an energetic pace the entire set. A cover of Freddi Henchi’s “Funky To The Bone” gave a nod to one of Colorado’s own, and the set ended with an explosive “High Off Your Love”. Just how soulful are these cats? Well, when I play the vinyl for friends, everyone thinks I am playing them some amazing funk band from the seventies who somehow got overlooked, and when people see it’s a white boy singing from behind the keys, they do a double take. Considering there was free beer from 12-3, there were a lot more people on the festival grounds than usual for the early bands. It was great to see a large group of people who might not have heard these bands anywhere else react to Monophonics, and to their label mates Orgone, who laid it down next.

Orgone started the set off with “Strike”, and the sultry stage movements and vocal prowess of Niki J. Crawford hit people in the face like a ton of bricks. Horns blared as Niki left the stage so the band could groove on some instrumental afro-beat that was funked up with soul, and Orgone proved they can get their message across even without words. The stage must have been soaked in sweat, because this band was giving it there all, and the crowd was giving it right back. It was only 2pm, and I already had a full days worth of fun! Crawford came back out for “Who Knows Who”, and the band left the stage having thoroughly rocked a crowd that was now starting to look a little tipsy. These two bands may have been the early acts, but they could have been the headliners considering the amount of talent they poses. With the free beer mostly dried up, and the crowd far from it, March Fourth Marching Band kept the party going with some Mardi Gras marching band funk, and they moved thousands as easily as they did hundreds the night before. (See our Day One review for more thoughts on March Fourth).

Anders Osborne changed the pace, and after nearly four hours focused on funk, we took a break for the blues. I had heard a lot of good things about Osborne before coming to the festival, but didn’t listen to any of his music because I wanted to be surprised. Like many assume Blues and Brews is still all about blues acts, what I heard about Anders led me to believe his sound was strictly blues. I was mistaken, and glad to have been. Yes, he got down and dirty with some straight blues/rock, but he also played tunes that showed off his sensitive songwriting and upbeat melodies. As Osborne was tuning and tweaking briefly, I heard a note, and turned to my buddy and said “He is going to play some Dead.” A minute or so later, he picked out the first few notes of “Fire On The Mountain”. Granted, I had been “tasting” beers since noon, and it was now almost 5pm, but I remember looking around at all the smiling faces lit by the warm sun, listening to one of my favorite songs of all time being done well by a new- to- me musician whose sound I fell in love with immediately, in one of the most beautiful settings you could ever imagine, and thinking, “Seriously?! Could this be any better?” Well, it turns out it could be, but not till Anders played again late night at The Sheridan Opera House.

The Festival may have not have a blues-heavy line up anymore, but the Acoustic Blues Competition is still a big part of the weekend. This year’s winner, Jim Adams, gave us a down and dirty delta blues version of “Come In My Kitchen” that was one of the best performances of the entire festival. I really want to see more of what this man can do, and hear he has a full band as well. Maybe a Sunday main stage set next year?

Trombone Shorty and Orleans Avenue brought the brass back out, and revived a crowd that was starting to show the effects of marathon drinking and dancing. A true entertainer in the sense of the word, Troy Andrews sings dances and plays trombone while working the audience with his charm. “Encore” showed the funk, hip-hop and rock flavors that Andrews and crew spice things up with, and Allen Toussaint’s “On Your Way Down” revealed his New Orleans roots. It was a good thing Trombone Shorty and Orleans Avenue recharged us a bit, because the days closer kind of brought me down.

After grabbing some much needed festival food and watching lightweights stumble, we started making our way back up front so we could be in the thick of it for Gov’t Mule. Once they took the stage, and opened the set off with Steve Miller Bands “The Joker”, we decided to just stay where we were, because this was not the kind of start we were hoping for. Really? The day was a rager, and they whipped out a lack-luster cover of “The Joker”? The rest of the set was just as flat, with sporadic sparks of energy. “Time To Confess” and “Beautifully Broken” are great songs, but the whole day was lit on fire by every other band, and I was hoping Warren and the boys would turn up the heat, and I have just heard “Soulshine” too many times. The Doors dark and mysterious “When The Music’s Over” closed out the night, and the whole set just didn’t sit right. The vibe went from Mardi Gras to morose.

We headed back to the campsite feeling as spaced out as the last song we heard, and we rallied for a much anticipated late night set by Anders Osborne. Seeing Osborne in an intimate and historic venue like The Sheridan Operah House was a real treat. He thrived off the closeness of the crowd and the humid air trapped in the packed room. I was looking down from the balcony above, and he looked like a Nordic god of thunder holding a guitar, showing every ounce of emotion he had both on his face and on the strings.. Explorative, expressive and electric-Osborne harnesses an intense inner power as he enters a trance like state during his performance. The “Got Your Heart/I Got A Woman” medley made want to fall in love, and as I was dancing with a beautiful writer from Aspen, I just might have.