Trending Stories from The Marquee
You are at:Home»Live»Photos/Review: Telluride Blues and Brews Festival Day 3
By Marquee Magazine on September 24, 2012 Live, Live Reviews, Photos 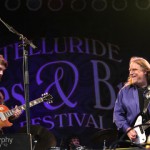 Waking up way more refreshed than I had expected on Sunday, I thanked the hangover gods for the free pass…because my head should have been pounding. The day’s music started at 11am, and The Lee Boys took us to church with their funky gospel straight from The Sacred Steel. I will be honest, I had not heard these boys before coming to the festival, but I really dig what they are doing. I think the conversation I had with them later in the day had a lot to do with that, because I got to see just how gosh darn nice these veteran players are. Since the Sacred Steel is present in their music, comparisons to Robert Randolph and The Family Band are regularly made, but The Lee Boys do have a different feel. I guess the best way to put it is that they are really filled with the spirit, and seem connected to the church even after hitting the stages for years. The title track off their new album Testify, which features both Jimmy Herring and Warren Haynes, pretty much sums up what The Lee Boys are about-lyrics that talk of salvation, and funky grooves that make you want to sin.

Since we had spent most of our time in front of stages or beer taps over the past two days, we decided to enjoy the surroundings instead of the sounds after the Lee Boys were finished. We walked into town, took pictures like Japanese tourists, sat next to the creek, rode the gondola as far as it would go, and just took it slow. As a result, we missed Kelley Hunt, Phil Wiggins and Rev. John Wilkins and Tab Benoit. It wasn’t our intention, but sometimes you just have to go where the day takes you. Returning mellow and easy, just in time for Chris Robinson Brotherhoods 4pm set, we were in the perfect state of mind for CRB’s chill Psychedelic folk rock.

I never really got into the Black Crowes, but I am really digging what Chris Robinson is doing with the Brotherhood; it seems as if this is the music that is really in Chris’s heart. Robinson did rock star, and he did it well, but now he is living his Topeka Canyon look. With incense burning on the stage, the “Lets Go” opener started the journey, and we traveled through a cornocopia of sound. The mind-blowing jam on “Ride” was Moog fueled and funky, showing how CRB can turn mellow to mania. The band has a lot of Grateful Dead tone to their sound, and they are obviously heavily influenced by the legendary band, but everything they do has a feel of originality. “Rosa Lee” appeared towards the end of the set, and we asked ourselves, “Is the air getting thinner, or are we getting high?” I think it might have been a bit of both.

Phil Lesh and Friends were the head headliner of the weekend, and Sunday drew Deadheads galore. The day definitely had a different feel than the others on account of the crowd, and I was really looking forward to a strong dose of The Dead, and a barrage of Phil bombs. The first set was pretty straight forward and middle of the road, sounding more like loose jam between friends and family than a festival headlining set. “Alabama Getaway” and “Cumberland Blues” are great Dead songs, but didn’t seem right for the line up on stage, and “Ramble On Rose” and “Casey Jones” just sounded, well, a little dull. The second set was a whole other ballgame! Starting with a funky “Shakedown Street” right into a driving “New Speedway Boogie”, they kept it continuous with “Caution>Low Spark Of High Heeled Boys>Birdsong>The Wheel”. Oh boy, the air raid siren should have gone off, because Phil was dropping some heavy artillery. “Fire On The Mountain” turned up the heat, and the “Going Down The Road Feeling Bad” closer about burned the place down.

With the official festivities over, we opted for some chill time at the campsite our last night in the mountains rather than heading into town for any late night festivities. Instead we sat and talked about all the music we saw, the craziness we created, the friends we made and started the discussion of condo vs. camping next year, because believe me you, there is not a chance I will miss the 20th Anniversary of Blues and Brews. A big thanks to Bill Kight and all the other staff who made the festival such a great experience for me and all the other 9,000 or so people there, and to Allison Murphy for contributing her awesome photos.