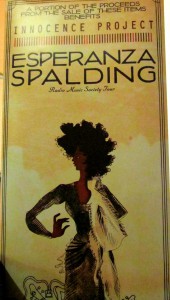 As the sound of a radio dial began to turn from the giant, funky onstage boom box containing an orchestra of brass and soul, it quickly became apparent that Esperanza Spalding had a specific purpose in mind. Mirroring her recent album, Radio Music Society, the September 25th performance at the Boulder Theater was a conceptual ode to the evolving possibilities of jazz and the experience of radio listening itself.

While there are obvious criticisms to be made about modern commercial radio – the standardization of shrinking playlists, the corporate and creative consolidations – Spalding’s vision captures an alternative universe, full of color, experimentation, and most of all, creativity. In fact, the first segment of the show, a musical reenactment of the turning of a radio dial, a collage of musical, cultural, and spoken word tidbits emerging and disappearing into an ether of static that finally ends on the “channel” of the concert itself, was an inspiring reminder of not only the age we live in, but also of the forgotten possibilities of our airwaves.

If anyone embodies the vitality and potential of modern music, it’s Spalding. Aside from winning the 2011 Grammy for “Best New Artist,” she is also one of the youngest faculty members at the Berklee College of Music. Her resume is impressive enough to engender a significant amount of hype, but her performance last Tuesday proved that every accolade is well deserved. Her bass playing is virtuosic, matched only by her multilingual, scat-style singing, which she often utilizes as an improvisational counterpoint to her low-end grooves.

Joined by an 11-piece band, and alternating between stand-up and electric bass, Spalding mostly played material from her latest album. Sprinkled within were some interesting covers, including Stevie Wonder’s “I Can’t Help It” and the Thad Jones/Mel Lewis composition “Us,” where she showcased an impressive array of musicians, including Jef Lee Johnson (guitar), Corey King (trombone), Alan Ferber (trombone), Leo Genovese (piano), Lyndon Rochelle (drums), and Igmar Thomas (trumpet).

Spalding has always gravitated toward whimsical arrangements, and her lyrics are dexterous in both form and content. They border on a spoken-word style, yet are sung with passion. This suits her perfectly in stripped-down formats, as exhibited on her first album, Junjo. In fact, she seemed to shine most during the latter part of the show, where she performed a solo version of Nat King Cole’s “Look No Further” and a trio version of “Precious.” In those configurations, her airy nature was less stifled, and the fluid interweaving of her voice and bass took a more central role. In the big-band format, however, much of the subtlety in her playing was drowned out. The arrangements were impressive, and certainly ambitious, but they often left little substance to grasp.

Still, even when the hooks were lacking, Spalding integrated cerebral musical passages into a unique, free-flowing narrative, merging the dual roles of conductor and band member quite well. She seamlessly moved from love songs to serious issues. Wayne Shorter’s “Endangered Species” transmuted the sounds of nature into the cacophony of the city. Driven home by both sparse and heavy musical passages, “Black Gold” (featuring Chris Turner on vocals) and “Land of the Free” tackled issues such as poverty, self worth, and injustice in the criminal system, both proving that there is plenty of room for topical substance in jazz lyricism.

While songs such as “Hold on Me” and “Smile Like That” explored the predictable ups and downs of love, Spalding escaped much of the bleak emotional terrain typically relegated to jazz vocalists by focusing on healthy, empowering relationships. The male figure in “Crowned and Kissed” was treated with regal flare, courtesy of Corey King, and “Cinnamon Tree” added an almost palpable sweetness to the theme of love amongst friends.

The set came full circle with “Radio Song,” a tribute to joyous trips across the radio dial. While it’s her most catchy song, it’s hard not to be reminded that serious artists like Spalding have decreasing real estate in a homogenized radio environment. Then again, with the advent of internet radio, social media outlets, and satellite varieties (and public radio, of course), perhaps diversity is again taking root. Either way, Spalding offers an alternative glimpse into what radio could be, and the ingredients necessary to make the airwaves truly “public” once again.