Trending Stories from The Marquee
You are at:Home»Cover Story»Billy Corgan’s Unwavering Vision of The Smashing Pumpkins Continues with “Oceania”
By Marquee Magazine on October 1, 2012 Cover Story, Features, Interviews, Levi Macy 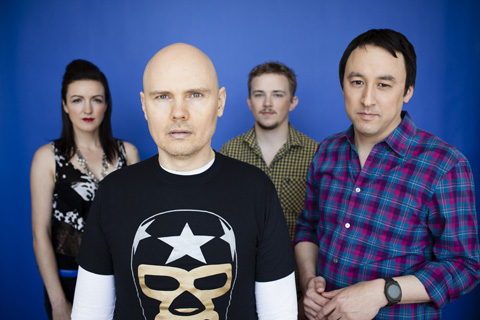 There once was a time, about two decades ago, when music was discovered by the masses through means such as television or even by actually going into a record store and purchasing albums. During this time it was not unheard of for a band to sell millions of copies of their recorded material. It was a magical time for music and if you weren’t there it’s likely that you’re having trouble even conceptualizing what a million albums might actually represent.

Bands went from practicing in garages to becoming household names nearly overnight. The fall from grace was just as quick. For those bands able to carve a niche, maintain a creative path and not implode, staying ahead of the curve has proven to be a difficult task.

Two decades later, only a handful of artists have survived the massive shift that is taking place within the music industry. The Marquee had a recent opportunity to pick the brain of one of the largest names to emerge out of the ’90s massive music scene, Billy Corgan, frontman of The Smashing Pumpkins.

With a career spanning well over two decades, Corgan is responsible for the sale of more than 20 million albums, a number practically unheard of in today’s culture. Despite a constantly evolving world of cynical bloggers, free downloads and vast social media outlets, Corgan has been able to maintain his integrity as an artist while constantly being expected to live up to standards set many years ago.

“We are basically in the death throes of the old model and the creation of the new one,” Corgan told The Marquee. “It’s happening so fast and most of us don’t even realize it. I’m basically my own record label now. It’s my own business to run and contextualize. I feel the issues today are different to talk about than they were ten or fifteen years ago. I also think there are more media outlets to express different takes on things and create a broader sense of myself as an artist and The Pumpkins as a creative enterprise.” After a hiatus following internal conflict among the original Pumpkins members, Corgan recently assembled a new team and has released an album as The Smashing Pumpkins for the first time since 2007.

Oceania began originally as a project known as Teargarden by Kaleidyscope. “This was a way to share the work as it was being done. It’s more just trying to break the stagnation of the traditional album model, which is often dictated by the record labels and doesn’t have much to do with creative cycles,” Corgan explained. At first, each song was released for free in hopes of opening the doors to a new fan base.

“I ran into the buzz saw, in a sense, regarding other people’s sentimentality of their version of The Smashing Pumpkins as opposed to mine. So we ultimately came to the conclusion that the best way to make a statement would be to make an album,” Corgan said. Thus, Oceania came to fruition, proving that The Smashing Pumpkins are far more than a novelty act from yesteryear.

Although the recent incarnation of the band has been met with mixed reviews by fans and critics, Corgan continues down a spiritual path with a constant drive to create. “I think what sells albums, tickets and t-shirts has very little to do with access. Everyone thinks it does, but you could also argue that opening your mouth can lose just as many fans as it can gain. Ultimately, it has to do with the music,” said Corgan. “My problem with the blogging culture is that it doesn’t really sell a lot of things. I think for every one thing the blog may sell, it hinders the sale of two others.”

Naysayers aside, Billy Corgan has managed to find a deeper appreciation and understanding of life that has undoubtedly been monumental in keeping The Smashing Pumpkins fresh. “We are often faced with choices in our lives that involve either short-term success or long-term success. Having been in this business for over 20 years, the things I’m most proud of are where I made those long-term decisions,” he said. “The things I’m least proud of are where I made decisions that maybe looked good in the short-term but in the long-term probably hurt. The way that connects to my spirituality is that I learned we need to trust ourselves. Your life is yours to live and in the end you have to trust that you know best what that means. You have to know your dream and pursue it with incredible vigor. At the same time, you have to have one eye on the big picture of what that means.”

Corgan’s ability and willingness to grow both internally and creatively as a public figure is proof that he won’t be settling for complacency anytime soon. It seems as if he has found a happy middle ground between trying to please fans of the past while continuing to build a rock and roll institution. “I have a lot of pride for where the Pumpkins are at this moment,” said Corgan. “It’s about just living in this moment and appreciating that the name ‘The Smashing Pumpkins’ still exists, and try our best not to live in the shadow of people’s memory of something that was idealized or not necessarily real. We still have a healthy fan base, we still create headlines and there is still a lot of new music to be played.”