Trending Stories from The Marquee
You are at:Home»Cover Story»Blue-Eyed Soul Singer and Minister’s Son Allen Stone Hops on Board with ATO Records
By Marquee Magazine on October 1, 2012 Cover Story, Features, Interviews, Timothy Dwenger 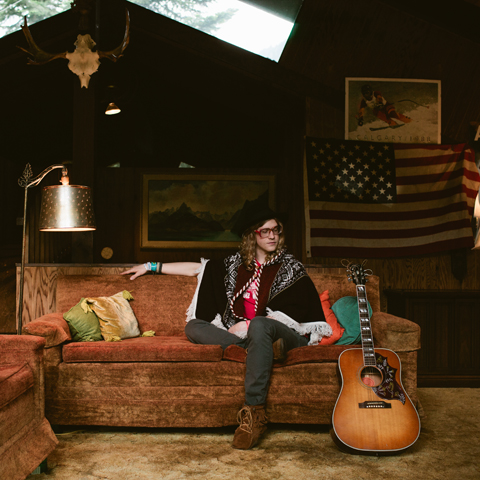 Smooth beats, swirling organ, jittery tambourines, honkin’ horns, and soulful vocals aren’t usually associated with twenty-five-year-old white boys with long curly blonde hair from rural Washington state, but Allen Stone isn’t typical in any way. The son of a minister, Stone never went to college and spent the better part of his late teen years touring the Pacific Northwest in his beat up Buick LeSabre and sleeping on people’s couches as he struggled to make his dream of being a soul music star come true.

“My father was a minister, so my earliest memories of music were at service as we sang hymns and worship songs,” Stone said during a recent interview with The Marquee as he prepared for a radio performance in Indiana. “I got the Stevie Wonder record Innervisions when I was about 15 and I said, ‘This is what I want to do, this is the type of music I want to sing.’ That was the kickoff point for me. From then on I became a student of the record and listened to Marvin Gaye and Donny Hathaway and Stevie and those old soul kings. That’s what really sparked an interest in that kind of music, for sure.”

That interest has led to two critically acclaimed albums that have put Stone on the map of soul singers to watch in this decade. His voice, his songwriting, and his powerhouse band combine to create collections of songs that are years beyond Stone’s short career to date.

Today, only two years after self-releasing his original debut, Stone shows maturity beyond his years as he talks about the reasons he decided not to sign to one of the major labels. Stone had received impressive offers on the heels of the success of his self-released, and self-titled, sophomore record, but instead went with Dave Matthews’ ATO Records (admittedly a subsidiary of Sony Music). ATO re-released Stone’s second record earlier this year. “I remember sitting down with my manager and he said, ‘You got to Step B on your own. You aren’t signed at all and you are touring and selling out shows in London, Amsterdam, New York, all these places and it’s kind of unheard of. If you sign with a major label now, they are going to want to take you from step B to step F. You’ll become everybody’s mom’s favorite band, and you’ll lose all your credibility. You really want to continue to build your name the right way. Build it grassroots, through touring and the live show.’ That made a lot sense to me,” Stone said.

While this kind of thinking probably makes  sense to a lot of people who aren’t in the music industry, it’s got to be tempting to jump at the big offer from the big label, when it falls in your lap — especially when this might be your only shot at success. “I’m 25 and I’ve never been to college and it’s kinda this or nuthin’,” Stone admitted.  “But, when you look at ATO’s roster, you’ve got My Morning Jacket, Alabama Shakes, Patty Griffin, all of these incredible artists that just kill it live. The culture that I want to build is a culture of touring and a culture of the live show. I want to gain the fans that will follow me forever and it seems to me that in most scenarios, major labels are more concerned with singles as opposed to getting a band on the road, letting them tour their butts off and play, and not only get better as musicians but get better as entertainers and performers.”

If the buzz that has already built around this blue-eyed soul prodigy is any indication, his prowess as a performer and an entertainer has done nothing but improve over the last year as he continues to hit the road hard and play night after night in whatever kind of room will have him.  “Fans really, really, really appreciate it when you come back to their city. If you really invest in a community and in a city and you go back and give 110 percent each time, and you hit it on the regular, they’ll give back and you will see results,” said Stone.

By all accounts, Stone’s live show is not only good, but great. “A lot of people come and say, ‘I feel like you took me to church,’” he said. “It’s a really weird comparison to me because I don’t go to church, and I don’t identify with Christianity anymore, but I was raised singing in a church so there is a spirit about communal singing that rings true. When you are at church the goal of the person on stage is to get everyone singing along and participating, whereas as a concert it’s not always that way. It’s often more about the performance than it is about getting people involved. So my goal is to get each and every person in that room involved with the show and to have an experience.”