Trending Stories from The Marquee
You are at:Home»Derek Miles»Greensky Bluegrass Returns on the Heels of Kinfolk for Three Shows
By Marquee Magazine on October 1, 2012 Derek Miles, Features, Interviews 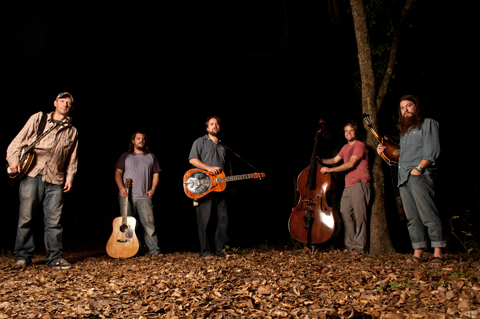 For years, there has been a trend of bands who, while firmly rooted in one genre or another, claim to not be part of it. In the early 2000s, for instance, hardly any jam band would ever admit to the title, usually imparting the over-used line, “We’re not a jam band, per se, but we do jam…”

So when a group made up of mandolin, banjo, guitar and upright bass claim that they’re not a bluegrass band, the immediate gut reaction is to want to call a big, giant B.S.

But Greensky Bluegrass’s Dobro player and band ambassador, Anders Beck, sees it differently. “Even though bluegrass is in our name, I certainly don’t consider us to be a bluegrass band,” Beck said during a recent interview with The Marquee.

Wait. What? Surely if it has the twang of bluegrass, acoustic instruments of bluegrass, and fast picking chops like bluegrass, then it’s probably bluegrass, right? Not necessarily. “To me, it’s about taking traditional bluegrass instruments and music and making it your own,” Beck said, adding that they are by no means bound to the genre, despite their instrumentation.

He also noted that Greensky, and other groups like them, owe a lot of the flexibility that they have to those who laid the seeds before them — pioneers like New Grass Revival and Country Gentlemen. “Those guys took the heat for the rest of us. They really forged a path,” Beck said. ‘The rest of us’ includes, of course, the group’s friends in music Yonder Mountain String Band, who recently had Greensky play as part of their Kinfolk Celebration in Lyons this August.

Beck, and his partners in Greensky — Paul Hoffman (mandolin/vocals), Dave Bruzza (guitar/ vocals), Mike Bont (banjo), and Mike Devol (bass) — see bluegrass as more of a jumping off point for their band. “We want to draw you in with the songs,” Beck said, “and just when you’re getting into a groove of lyrics and melody, all of a sudden take you out to another land; launch into the stratosphere and then come back [to the song]so someone can think, ‘Wait! What the fuck just happened?’”

And that diversity onstage obviously translates into diversity in their audiences, which Beck and his bandmates are thankful for. “We’re lucky enough to have bluegrass lovers, jamband fans, who are of course the most rabid music lovers in the world, and singer/songwriter fans also,” he said.

Playing more than 200 dates a year, the band is obviously focused on environs where that improvisation can soar, but the group is also serious about their studio work, and their 2011 release Handguns climbed to #3 on the Billboard bluegrass chart.

“We’re all really proud of that record,” Beck admitted, explaining that the record is the first album that was produced entirely by the band. While Railroad Earth’s Tim Carbone had helped the band produce two albums, 2006’s Tuesday Letter and 2008’s Five Interstates, Beck explained that for Handguns, the group felt they needed to see what they could produce on their own. “We learned a ton from Tim,” Beck said. “But we decided to try it ourselves as the five people that know this band the best.”

With that success now under their belt, Greensky plans to return to the studio soon to work on their follow-up to Handguns, which Beck said will be a primary focus for the band in the coming year. But he added that they will still be touring heavily, as well as releasing more multi-track live shows, for their All Access series of live recordings.

• Head for The Hills