Trending Stories from The Marquee
You are at:Home»Lindsay Allen»Photos + Review: Crime and the City Solution @ Oriental Theater 10/18/12
By Marquee Magazine on October 26, 2012 Lindsay Allen, Live, Photos 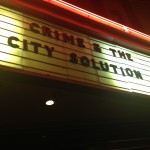 Photos and Review by Lindsay Allen

Twenty years may seem like a long time ago; Denverites commiserated about the Broncos defeat by the 49ers in Superbowl XXIV, a smoking ban was implemented on all domestic flights less than six hours long (remember when you could smoke on an airplane?) the Cold War and Gulf War were finally officially over and Soulja Boy and Kristen Stewart were born. In music, Roger Waters performed The Wall live in Berlin to commemorate the fall of the Berlin Wall, Billy Idol, Wilson Phillips, Poison, New Kids on the Block and Phil Collins were on the billboard top 10 and Aerosmith and Mariah Carey won Grammy’s. Point being, 20 years isn’t that long ago at all when put into perspective.

Post-punk, desert gothic worldly rockers Crime & the City Solution performed in Denver at the Oriental Theater for the very first time in over 20 years last Thursday October 18, and they performed as if they hadn’t missed a beat. Granted their hair was much shorter than in the old days, but the music and lyrics were right on key. The set list included an exciting variety ranging from old favorites like “Dangling Man,” to their newest work “Colonel Doesn’t Call Anymore” introduced by a westernized looking Simon Bonney.

While dozens of members have waxed and waned since the original band formed in 1977, Bonney has been the vocalist across the board. Disbanding on one continent and regrouping on another, the band has seen many transformations from Sydney to Berlin to London to Los Angeles. The current revamp Bonney rounded up includes multi-instrumentalist, singer and songwriter David Eugene Edwards (Wovenhand, 16 Horsepower) of Denver.

The Oriental is located on 44th and Tennyson and is by no means new or state of the art. Despite the city’s recent efforts to give the intersection a face-lift, the Oriental remains a relic. The inside smelled dingy and the toilet came with proper handling instructions, but the décor still looked mesmerizing beyond the curtains. This is the type of place to see great music and get away from the monotonous sheep-herding routine used by larger venues. The Oriental is intimate enough to serve beers in glass bottles, still overpriced, and folks can leave their belongings on their chairs or on the rails to hold their spot while they’re gone. This was the perfect atmosphere to experience Crime & the City Solution.