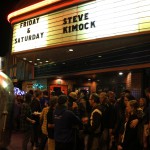 There’s no denying that Steve Kimock loves playing in Colorado. The past three dates will conclude his fifth trip through Colorado just this year. In fact, The Oriental Theater was the only venue to see a two-night run during the fall tour of Kimock’s latest all-star band.

To describe this band as a super group may even be too dismissive; considering the fact that any one of the musicians could be leading a group of their own. The most recent incarnation of Kimock’s ever-changing cast of character features Parliament/Funkadelic legend Bernie Worrell on keys and vocals, groove master Andy Hess on bass (formerly of Gov’t Mule and Black Crowes) and Wally Ingram on drums, who has been the rhythmic foil to many big name artists such as David Lindley and Bruce Hornsby.

The Oriental Theater provided a refreshing change of pace from Kimock’s usual destination at Quixotes’ True Blue. For those that haven’t visited The Oriental, it’s an odd but inviting combination of both theater and club environments. Spacious yet intimate with plenty of room to stand or sit. The comfortably quirky room can sound a bit cavernous at times but after your ears adjust to the resonant ambiance, it reveals to be a great place to hear a show.

The night’s performance began modestly with a down-tempo instrumental ballad titled “Come Back My Love,” perhaps not the best choice for a set opener, but soulful and enjoyable nevertheless. After setting the mood and easing into the first set, the band wastes no time venturing off into the hypnotic dance groove of “Crazy Engine,” which featured a nice exploratory jazz passage with Kimock on his lap steel. Anyone who has heard Kimock play lap steel knows about the sonic rapture that he can produce on that instrument. He may go from playing screaming blues licks over a funk groove to Indian raga-like phrases during a spacey interlude, all in the same song.

With many bands, it sometimes takes several songs for the musicians to get loose and tap into that special exchange between stage and crowd energy. But for such a group of elite players, it’s not unusual to achieve lift off early in the night. Wally and Andy proved to be a top notch rhythm section; always anticipating what direction Bernie or Kimock might take a jam. The way that this band casually coalesces around a groove with such reserved intensity and space between each other’s playing is nothing short of phenomenal. That being said, it didn’t take long at all to warm up the crowd.

Following a three-song batch of heavy dub and funk musings, the band shifted gears to play “Many River to Cross”; an uplifting gospel inflected song with soaring melodies from Kimock and Bernie. Next came a familiar cover that was welcomed by cheers and smiles. “This Must Be the Place” (a tip of the hat to Bernie’s tenure with the Talking Heads) prompted a fun sing-along to close out the first set with Bernie leading the crowd through an interactive recital of the chorus.

The second set proceeded with a lengthy jam that turned out to be a highlight of the night. About midway through the song a man walked out on the stage with trumpet in hand and began to play. It was none other than Willie Waldman, a solo artist who has recorded with Perry Farrell and has been a part of countless other successful projects. Waldman played with the band for just one song but his presence added great variety and dimension to the music.

After absorbing about ten minutes of harmonically mind-bending jazz improv, the band brought the audience back to earth with some more danceable songs containing funk/blues and reggae underpinnings. What ensued afterwards was a masterful rendition of “Tongue N Groove” where Bernie really stretched out on some interesting ideas during his solo. Kimock drove the song home with a guitar which he only played once during the evening- out of the seven or eight he had with him. This guitar is clearly something special to Kimock. It looks as if it’s seen thousands of gigs and the tone of the instrument is unbelievable.

The guys closed out the night with another Talking Heads classic “Burning Down the House,” or as some people were calling it “Bernie Down The House.” The band took their leave from the stage and the house lights soon came up, signaling that there would be no encore. However, the night seemed to have resolution anyway and somehow felt complete. How? Even with no encore? Because those guys played their asses off.