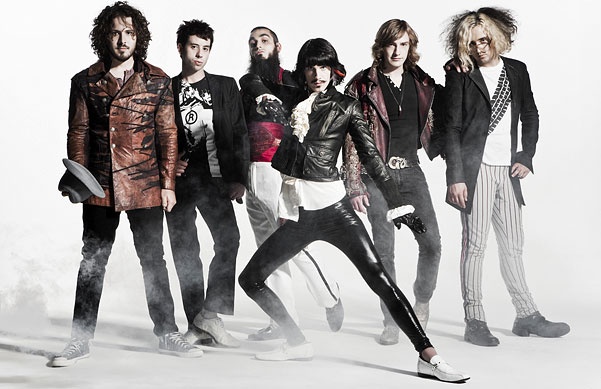 The Marquis Theater in downtown Denver is one of my favorite rock clubs to see a show. It’s small size and intimate nature allow for the crowd to pack in and get close and sweaty all while being surrounded by well disbursed sound. The theater was nearly sold out, which is no surprise, even for a Sunday night in Denver. As the chants for Foxy Shazam grew louder and more intense, I noticed that this band that I was only casually aware of these past few years had developed a faithful cult following, a realization that would continue to prove true as the show moved through the night.

For those unfamiliar with the Cincinnati-based Foxy Shazam, they can be described as somewhat of an “acquired taste.” The brainchild of extravagant lead singer Eric Nally, Foxy Shazam is an eccentric mix of glam rock, punk, ska and progressive rock all rolled into one high energy band. Nally embodies the spirit of a modern day Freddie Mercury with his high octave, operatic voice that bellows over each song with passion and intensity. His stage presence exuded Mercury as well, being clad in all black tight fitting clothes with his shirt unbuttoned and collars raised, he ran around stage dancing wildly and exciting the audience with his energy.

They opened the night with “Welcome to the Church of Rock and Roll,” the first song off of their latest album. It’s a song that showcases the band’s brand of anthemic, grandiose rock songs reminiscent of Queen and Elton John mixed with the modern band the Darkness. The Marquis’ stage is small but the quintet made use with ease as these guys never stood still, exhibiting each individual’s personalities in a band that is certainly extravagant and not afraid of it. With Nally’s Mercury-esque style, a keyboardist whose foot long beard and lack of hair accentuated his demonic facial gestures, a guitarist whose long hair and mustache seemed straight out of the band Boston and trumpeter tucked away with a top hat and John Lennon glasses, you could tell it was no show, but felt like an authentic display of each member that seemed straight out of the late 1970’s.

For a band that feeds on the irreverent and flamboyant, they really do create some toe-tapping, fist pumping rock music that is catchy with its subtle complexities and sing-a-long friendly vocals. Even just watching the audience’s reactions to the music proved that fact with people jumping in unison, singing and cheering through each song. The songs “Holy Touch” “Unstoppable” and “(It’s) Too Late Baby” proved that as it seemed the whole theater sang each lyric as heartily as Nally. But this quality doesn’t just apply to their newest album, as they played a healthy mix of their discography, all exhibiting Foxy Shazam’s unique style.

Maybe the most disappointing part of the night was that the house lights were left on for the entire show. Whether or not this was meant to happen I’m not sure but it didn’t feel right, especially for these guys whose stage presence is chaotic and intense. But in true rock fashion, Nally ended the show by asking the crowd for cigarettes. As the crowd threw packs of smokes on stage, Nally picked up about 10 and finished the song “The Temple” while smoking all 10 at once. If that wasn’t enough, during the dramatic crescendo-building finale, he asked for all lights to turned off and then proceeded to smash all 10 smokes in his mouth in a flurry of sparks and ash. True rock and roll showmanship.