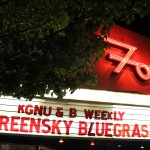 Review and Photos by Derek Miles

Attention everybody: The show is now officially SOLD OUT! The dreaded words for non-ticket holders were broadcasted outside the Fox as the line to the box office snaked back some hundred plus feet. A collective sigh of relief was shared among those who had locked in tickets ahead of time. However, the poor eager fans in the other camp were forced to begin the daunting search for extras.

It was immediately apparent that the crowd was riled and ready for Greensky Bluegrass. After Joshua Davis [opener]had left the stage, it seemed like only minutes had passed before Greensky’s members started trickling onto the stage one by one to tune up. Paul Hoffman made way to his mandolin first as the crowd greeted him with energetic and anticipatory applause. Next came acoustic bass maestro Mike Devol, also welcomed with ear-piercing whistles and whoops. The others proceeded in similar fashion with Anders Beck (dobro), Dave Bruzza (guitar), and Mike Bont (banjo) making the final adjustments to their instruments.

Throughout the night the band wove a fine musical tapestry of choice covers like “Atlantic City” [Bruce Springsteen] and Bruce Hornsby’s “King of the Hill” amongst several fan favorites from Greensky’s latest release, Handguns. Tunes like “Don’t Lie” and “Jaywalking” prompted soulful sing-alongs while others sparked raucous bluegrass romps that made you move your feet whether or not you were the one boogieing. Because if you weren’t, you sure had to make room for those who were.

Both Greensky’s instrumental prowess and songwriting sensibilities were displayed with great balance on this night. With the ability to treat a tender story with reserved intensity or a heavy groove of improvisational string funk with slinky melodies to make your head bob in a way you never have before, the band’s command of their craft hardly ceased to amaze. Each song seemed to fit perfectly in line with what followed or proceeded it. Whether it was a soft, impassioned balled or a wild chase through a fast picking bluegrass number, Greensky managed to tie the knot on a wide bag of musical realms with laid back finesse.

From jam funk dance party to back porch sing-alongs with family and friends, the show came full circle after traveling many a musical terrain. The band bid the crowd goodnight as it was clear they were grateful to be back in beautiful Colorado during the fall. However this was not a farewell to the Front Range but rather a hello; a warm up and harbinger of good things to come over the weekend. With the next two nights at the Bluebird in Denver, I think it’s safe to say “make yourselves at home Greensky”, cause Colorado loves you and you’re welcome in our home anytime.