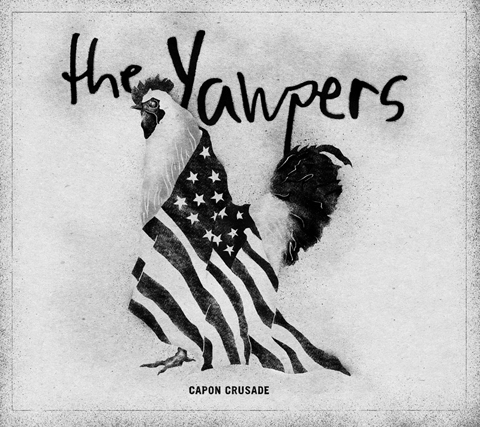 Boulder’s indie-country rockers The Yawpers, who just released an EP earlier this year, are finally ready to issue their first full-length album Capon Crusade and with songs like these the group might just change the perception that Boulder’s only full of jammy potheads.

Earlier this year, in writing about Lucero’s Women & Work I wrote, “There has always been this sort of implied danger with Lucero — as if the things that turn a rowdy night into a behind-bars kind of night are laying just under the surface.” I should have saved that sentence for The Yawpers review.

The Yawpers are, in many ways, Boulder’s answer to Lucero, or Deer Tick, maybe with some J. Roddy Walston and the Business thrown in for good measure. There’s heavy drinking, lots of sweating, and a raw energy that doesn’t necessarily fit well on a CD. But despite their young age as a band (just over a year now) and considering their recent lineup changes, including the addition of a fourth member, the band simply nailed this debut. They didn’t play it safe. They let it all hang out, and that vulnerability is palpable and addictive.

The album begins with swampy guitar notes that are joined by a steady kick drum before they both explode into the first verse of “Savage Blue.” The song is a perfect start to the album as it does what the rest of the disc does — it takes listeners on a ride. But unlike many bands, The Yawpers use all five gears in the transmission, and they switch between them often. They’re sometimes delicate and sometimes pedal-to-the-floor aggressive.

“Mother” is one of the more reserved songs on the disc, or at least it starts that way, but just before the band hits the one-minute mark, they can’t help but grab the shifter and let it roll.

On the other hand, the absolutely off-the-hook barroom anthem that is “Rock Bottom” is as good as any drinking song that’s come before it, and it even features the sound of breaking glass. It’s not a stretch at all to imagine Yawpers crowds raising glasses and trying to sing over the P.A. system on that track.

And again with “Garbage Man” The Yawpers showcase their ability to change the flavor of a track multiple times, with it coming across seamlessly and not schizophrenic. In the first minute-and-a-half of the song the group transcends three very separate styles, from bluesy gospel, to hard-drinking rock, to over-the-top cathartic purgings.

At the heart of all of this tumultuous energy for The Yawpers are guitarists/vocalists Nate Cook and Jesse Parmet, who used to play together in the now defunct Boulder group Ego Vs. Id. Recently, the band changed drummers to include James Hale and added harmonica player Dave Romano. While Cook’s voice might take front and center throughout the record, it’s a voice that needs accompaniment and Parmet’s playing compliments it as well as a good smoke makes a glass of whiskey go down better.                                              — BFJ