Trending Stories from The Marquee
You are at:Home»Cover Story»Cellist Ben Sollee Brings Hit Trio on Tour in Support of His Latest, “Half Made Man”
By Marquee Magazine on November 1, 2012 Cover Story, Features, Interviews, Ryan Lappi 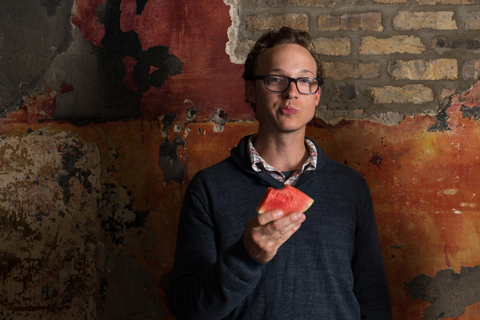 As modern music continues to shift in the direction of the consumer — unlimited downloads, personalized playlist algorithms, and social media supplanting the traditional modes of promotion — artists often find it difficult to adapt. But for Ben Sollee, the changing musical culture presents many new opportunities to explore. In fact, he seems more than eager to take on the challenge.

“You have to surround yourself with the right people, and you must have a story to tell,” he told The Marquee during a recent phone interview. “You can’t just write songs these days. People are just as interested in your life story, and you have to make a personal connection with the audience.”

It’s an approach to business that mirrors Sollee’s approach to music. As a classically-trained cellist who’s made inroads into indie-folk, bluegrass, rock, and R&B styles, Sollee is no stranger to adapting his talents into new contexts, and most recently, part of that adaptation is the development of his trio that features Jordan Ellis on percussion, and multi-instrumentalist Luke Reynolds.

But as evident in the title of his newest album Half Made Man, the 28-year-old considers his story incomplete and in need of continued reinvention. Featuring guitarist Carl Broemel of My Morning Jacket, former Turtle Island String Quartet violin virtuoso Jeremy Kittel, former STS9 bassist Alana Rocklin, and percussionist Jordon Ellis, Half Made Man is a loose, gritty, and deeply personal exploration of the changes in perspective that Sollee has experienced as the world moves seemingly faster into an uncertain future.

The album was facilitated through PledgeMusic, a website which helps musicians fund their projects through donations from fans, a’ la Kickstarter. Although this crowd-sourcing approach allowed him to bypass the traditional record company and have more creative freedom, it also came with its own set of challenges. “You have to be involved in every step, and constantly communicate with your audience,” he said. “It’s kind of awkward, like high school prom. You’re not sure how close you’re supposed to stand with your partner, or what your boundaries are. But as we continue performing I think those relationships will become more established.”

Community-building is an essential part of his profession. He has experimented with pay-what-you-can ticketing, and often offers vouchers to those who travel to his shows by foot, bike, or public transit. Most remarkably, he has toured across the country by bike — cello in tow — over 3,200 miles, with the intention of creating a more personal and sustainable connection with the communities in which he performs. “You can’t roll up your windows, or ignore the world around you, on a bicycle,” he said.

Along the way, Sollee has offered insightful social commentary, and is as comfortable talking about political hot topics like mountaintop-removal in Appalachia or the need for sustainable urban infrastructure as he is about his own personal life. “Our generation is taking control now,” Sollee contends. “We’re going to have to make big decisions about how to live sustainably, and I think the artist’s role is to give a sense of humanity to the larger issues we face.”

Growing up in Kentucky, Sollee also has a real-life perspective of the issues he’s passionate about. “It’s hard to convey the feeling of what it’s like to experience a mountaintop literally blowing up, or what it’s like having your water shut off because the water table is too polluted to drink, or the experience of the earth shaking below your feet,” he said. “But I can tell stories about the toll that mining or hydraulic fracturing takes on communities, or try to create a connection to that sense of loss when the land has literally been taken away from you.”

But even with those perspectives, Sollee’s songs are far from pessimistic. The traditionally pensive voice of the cello is more often replaced by rhythmic, driving bow chops, subtle counterpoints to the electric and pedal steel guitars which take a prominent role on Half Made Man. His shows are known for their intimacy, and his inventive lyrics and candid storytelling bring everyday wisdom to the musical tensions and ostensibly existential predicaments experienced on both a personal and societal level. As his audience and artistic vision continue to grow, maybe too will the faith that music remains a vital and sustainable profession for those willing to adapt to the changing times.