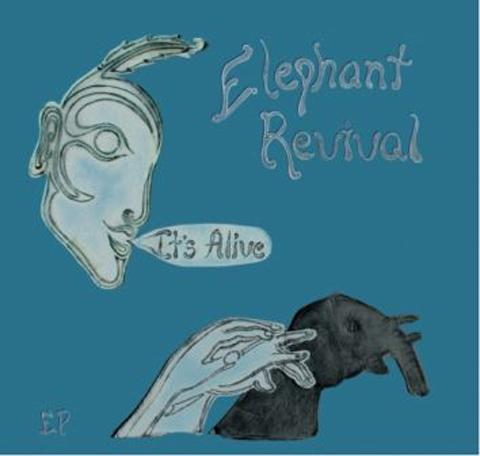 ­For nearly six years the transcendental folk group Elephant Revival has been helping to mold the modern folk tradition, but with their latest EP It’s Alive the group has arrived at a place of beauty that is as much a milestone for the band as it is for the entire genre.

Produced by Sally Van Meter and recorded at Immersive Studios in Boulder, the seven song collection was lovingly mastered by Gus Skinas of Sonoma Mastering, and the added warmth of Skinas’ system makes every note on It’s Alive jump from the speakers.

The EP starts with the jazzy old-time “What’s That?” which highlights multi-instrumentalist Bonnie Paine’s lilting, haunting vocal work. While her voice is such a magnificent part of the group’s sound, the band doesn’t rely on it throughout. The darker “Quill Pen Feather” pushes guitarist Daniel Rodriguez’s voice into the forefront, drastically changing the tone of the band, while Sage Cook takes over vocals for “Wake’s Only Daughter.” That ever-changing front voice is crucial to keeping Elephant’s sound perpetually fresh. But they do, of course, come back to Paine’s whippoorwill-vibrato and “Part of a Song” isn’t just the disc’s strongest track, it may be the group’s best song to date.

The release also comes with an illustrated hardcover songbook containing lyrics, chord charts, notations and arrangements from the band’s first two albums, as well as artwork by every band member.