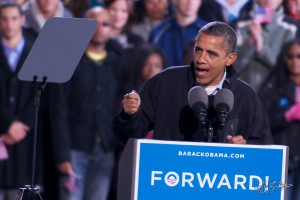 Photos and Review by Ty Hyten

Over 20,000 people waited in lines weaving for what seemed like miles of the chilly Community College of Aurora campus last night for President Obama’s final stop in Colorado before the election. Adding to the draw was the last minute addition of an acoustic performance from Dave Matthews. Limited event information left most of the tired crowd unaware that the President wouldn’t be speaking until 10:25pm, three hours after the event doors. For upwards of two hours a constant stream of Obama and Dave Matthews fans poured into a large section of the quad, a good distance from the stage which was fenced off for those with special tickets. As we waited, we got brief and fiery speeches from senators Michael Bennett, Mark Udall, Governor John Hickenlooper, and others preaching “The-Vote” to the choir.

As the clock neared ten, Dave Matthews took to the stage with a beanie and just an acoustic guitar. In his unmistakable mumble he got the crowd laughing before playing a quick five song set opening with a cover of John Denver’s “Take Me To Tomorrow,” on to “Funny The Way It Is,” “Mercy,” “You & Me,” and ending with “Don’t Drink the Water.” Dave sounded great and played with tons of energy despite the absence of acoustic wingman Tim Reynolds. The set felt terribly short given the long wait for thousands of fans, some who had been there for well over seven hours, but that’s to be expected for a campaign rally.

It was nearly 11pm when Barack Obama strolled on stage after what I imagined was him circling the venue several times in a black helicopter. Black suits surrounded the stage as a casually dressed Obama made his way down the catwalk. The crowd cheered with everything the stern voiced Obama said during his fourth rally in as many states of the day. If he was drained he hid it well, smiling, and joking with members of the crowd. His message was brief, lasting just around twenty minutes, but there was no shortage of enthusiasm from the seas of supporters stretching well past a decent vantage point of the stage. The evening, though long for many, was a perfect ending to this much longer election season.