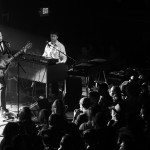 As a music fan, it’s always a treat to see an artist in a place or venue that they love playing. The anticipation comes naturally, as it’s no secret that when an artist is in a place that inspires them, we listeners are privileged to some of our most memorable shows. So when The New Mastersounds’ guitarist Eddie Roberts told me in a recent interview for the November issue of The Marquee that Colorado – and Cervantes’ Masterpiece Ballroom in particular – is one of the band’s favorite places to play in the country, I was naturally excited at the possibilities the night’s performance held.

Due to a train delay en route to the venue, I walked into Cervantes’ just in time to catch the group heating up on their first extended improv of the evening. I was sorry to have missed the opening downbeat, but nevertheless was reminded straight away why I feel The New Mastersounds are one of the premier bands to see perform live today. They were clearly coming out swinging musically, and were dressed to impress – including Roberts’ remarkable handlebar mustache and suit. Every time I’ve seen them play, the band has projected an energy that is lovable and inviting – and above all else, downright funky – and last night was no exception.

The assembled crowd had come out strong, and while I never heard whether or not it was a sellout, it sure felt close. It was a party atmosphere from the get go and it seemed as though many of those in attendance knew full well what they were in for. As the band’s rhythms began to give the night its character, everyone seemed to lock in quickly – this audience was ready to dance.

The band worked through selections from their standard set while sprinkling in tracks from their new release Out On The Faultline, which were great to hear, and everything was performed at a very high level. The show was anchored by the duo of bassist Pete Shand and drummer Simon Allen, who at times were reminiscent of the old school James Brown rhythm sections of the 60s and 70s – foundational to the funk, and never out of the pocket. And, while Roberts was clearly “on” and flew threw licks on his Gibson 335 that would take the lead on most evenings, for me last night it was keyboardist Joe Tatton who really stole the show. The phrasing and showmanship he demonstrated on his Hammond B3 and Rhodes setup more than once stepped up to lead the group and cut through the mix (which, on a side note, was excellent courtesy of Jon O’Leary running FOH), and with each solo he pushed his bandmates faster and farther into the night’s groove. I was impressed, to say the least.

Critics might note the lack of strong vocals in the group’s music, and while they have been incorporating more vocals on their studio material of late, those looking for a rock show led by an iconic front man ala Mick Jagger or Jim James may want to look elsewhere. But really, even for those folks, The New Mastersounds’ recipe for success is tough to argue with. They are four great musicians putting on a tight show and engaging the crowd, and clearly having fun while they’re at it – what’s not to love?