Trending Stories from The Marquee
You are at:Home»Features»Willie’s Son Lukas Nelson Learns His Own Lessons on His Latest Album ‘Wasted’
By Marquee Magazine on November 1, 2012 Features, Interviews 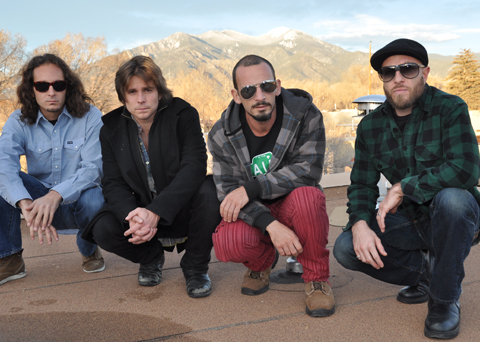 Lukas Nelson was — and to a large  extent still is — a kid surrounded by musical royalty. Growing up on tour buses with his megastar father Willie, Nelson experienced a gilded life that few others ever have the chance to see.

The elder Nelson immersed the younger one in the touring life, and the road was home to the kid before he ever played a gig on his own. This was both a huge advantage to Lukas Nelson as well as a huge concern. No one wants to live in someone else’s shadow, feeling like your music was ‘fast tracked’ because of a musical legacy. And to his credit, once Nelson decided to go out and play some songs of his own, he did it just like any other aspiring musician would — he ground it out. Nelson dropped out of school in L.A., lived in his car and played on the street. There were no calls from pop to get his foot in the door, just time in the trenches.

A few years later, the now 23-year-old Nelson is playing beside his heroes because they see him as a peer, not as Willie’s kid, and he seems to be genuinely grateful and cognisant of that fact.

When The Marquee caught up with Nelson it was after a hell of a night in Marin County playing with one of his heroes, Bob Weir. Leading with the question, “I heard you had a hell of a night last night,” The Marquee must have seemed like some kind of all seeing eye, because Nelson’ voice had a bit of concern in it, as if he was thinking, “Uh, oh…I know the kind of hell I raised last night, and I am sure hoping this guy doesn’t.” Once we explained that we were referring to playing with Bob Weir, there was a sigh of relief. “Oh yeah!” Nelson finally sputtered out. “Bobby and I are good friends. We play together quite a bit nowadays. I went out and played the Sweetwater last night, and we did an acoustic set together. Really a fun time. I mean, the guy who has been the coolest to me, and I have grown the closest with, is Bob Weir. He is just the man. He has really helped our band out quite a bit.”

Nelson knew at a very young age that music would be his career path, and he studied hard, making music his main educational goal. He learned guitar, learned the ropes, and learned some lessons.

Nelson’s second album Wasted, released in the spring of this year, talks about some of his most recent learning experiences, including how living hard on the road can take its toll quickly, and how some re-evaluation was in order.

Unlike the message in the opening line of the Townes Van Zandt song “Pancho and Lefty” — which Nelson’s dad took to number one with Merle Haggard in 1983 — Lukas learned that “livin’ on the road my friend is [not] gonna keep you free and clean.”

And Nelson isn’t opposed to talking openly about it. “Wasted was wonderful. It was a time in my life I wasn’t necessarily proud of, but I made it through,” he said. “Well, you know, I made some changes for a while, and I have never gotten that bad again. I quit drinking for about ten months, just because. But then I started drinking again. I was never really ‘on the wagon,’ I just needed to slow down. It wasn’t just the drinking. It was the whole lifestyle; who I was hanging out with. I have definitely turned my life around. Although, I have the worst hangover right now.”

At 23, and already with two studio albums under his belt, Nelson has gained a lifetime of experience and his career is quickly gaining steam on account of the constant fire he stokes under his music. And he’s continuing to stoke that blaze as winter approaches. “We are putting a live album out real soon. We recorded some of those Wasted songs live in Nashville,” Nelson said, adding, “I want to do some acoustic stuff. I also want to explore some symphonic sounds, and electronic as well. I just want to run the gamut. It’s all just kind of like whatever shows up. I just co-wrote a song with Neil Young, and that was pretty cool. He’s been playing it at his shows. We had been talking about Grace Potter, e-mailing back and forth, because we had just seen her at Farm Aid, where she said something like she  ‘…just needs a song she’s livin,’ and I thought, man that would make a great song. So he e-mailed me back some lyrics, and I e-mailed him some lyrics, and I got a couple lines in there. Then he put a melody to it, and now he’s playing it live. I would really love to work with Paul McCartney or Eric Clapton, but really I am just having a great time doing what I am doing right now.”

Nelson recognizes the fact that he had an extraordinary upbringing, and that his last name opened doors, but he also sees how musicians have started treating him as a peer, and his reaction to that is simple humbleness. “It feels great. It feels really damn good.”

Bob Weir and Neil Young don’t take time out of their lives just because Willie Nelson’s kid wants to make music, they take time out to work with artists they respect, admire and connect with. Nelson, it seems, has earned his stripes, and to do so it also meant casting aside some early golden opportunities, just to make sure he was doing it on his own. In fact, when Nelson was 16 he had one of his greatest musical memories to date when he played onstage with Bob Dylan. “We jammed together. He asked me to be his guitar player back in the day.” But Nelson declined the offer knowing he had yet to prove himself, mostly to himself.

Now, it’s not like Nelson was ever in danger of being homeless, but turning down the chance to play with Dylan in favor of living out of his car and busking on the streets is just one item on a list of ballsy moves that have come full-circle, allowing him to be where he is so early in his career — standing on his own, even if he is a bit hungover and still Wasted.