Trending Stories from The Marquee
You are at:Home»Brian F. Johnson»Bonnie & The Clydes Finish 2012 Strong on the Heels of Their Album, “Wrong Side Up”
By Marquee Magazine on December 1, 2012 Brian F. Johnson, Features, Interviews 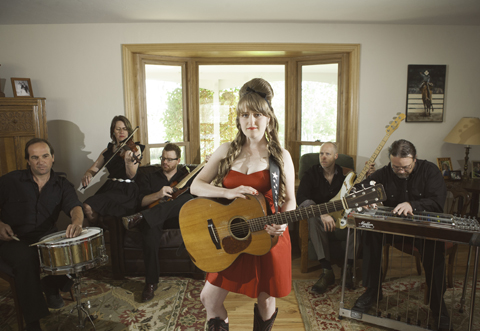 For decades, it seems country music has had an identity crisis with all the subgenres and qualifiers that’s been attached to it — alt-country, outlaw country, truck driving country, country rock, rockabilly, pop country, the Bakersfield sound, and of course, Wal-Mart country.

But when Bonnie Sims says she and her band play “Colorado country,” in one fell swoop she combines nearly every one of those subgenres into a mix that conveys everything from second generation country musicians of the 1930s and ’40s to the blend of Western swing, country boogie, and honky tonk of the 1960s and 1970s country — and just for shits and giggles, Sims throws in a little yodeling as well.

Started in 2010, it’s no wonder that Bonnie & The Clydes so seamlessly float between the best elements of each sub-class of country music, because their leader is well versed in country music, to say the least. If it was any other genre she’d be called “classically trained,” but it being country music they’ve opted to keep it less pretentious.

Originally from Texas, the spunky frontwoman attended South Plains College in Levelland, Texas, 25 miles due west of Lubbock. The college — the sister school of Texas Tech — was the first school anywhere to offer a country and western degree, and Sims, by golly, attained that degree.

While doing so, she was awarded “Best Female Vocalist” at the school and met Taylor Sims, who had just captured “Best Male Vocalist.” Taylor, who had spent summers in Colorado as a fly fishing guide and musician at a dude ranch in Gunnison, had already moved to Colorado, and when Bonnie finished school she moved up to Colorado as well, and the couple got married, but it would still take some time for Taylor Sims to become one of the Clydes.

“Oh, Taylor wasn’t in Bonnie & The Clydes at first. I’ve had lots of Clydes,” Bonnie Sims said over lunch during a recent interview with The Marquee, along with husband Taylor.

The couple, who this fall celebrated their fifth wedding anniversary, explained that Taylor Sims was involved with his own band, Spring Creek, when Bonnie started the Clydes. Spring Creek had been having great success after taking home some prestigious awards and wins in band competitions early in their career. In fact, the band was doing so well, with nearly 200 dates a year, that Taylor was stuck in a pattern of putting Bonnie off.  “I kept saying, ‘Give me one more season. Give me one more touring season,’” Taylor said. “But things kept coming along with Spring Creek that we couldn’t turn down, so in 2010 — March of 2010 — Bonnie had kind of given up on waiting for me and started the Clydes on her own.”

Shortly after Bonnie’s band started to take off —even going so far as to release a self-titled debut — Taylor’s band decided to put the brakes on hard. Spring Creek had completed seven years of heavy touring and when Taylor told his bandmates that he had only one more season left on the road, he was relieved to hear they felt the same way. And as fate would have it, not long thereafter Bonnie got word that her guitarist was going to leave her band. “A week later, Taylor played a show with us at Gold Hill Inn,” Bonnie said, and this most current incarnation of the Clydes was born.

The full lineup additionally includes Nancy Steinberger, formerly of Giddyup Kitty and Coal Creek Bluegrass, on violin; Michael Schenkleberg on bass; Chris Ramey on pedal steel; and for the remainder of 2012, Damon Smith of Turn4 and the Hi*Beams will handle drum duties.

Bonnie & The Clydes started off as a country cover band, but now, with the addition of Taylor, the group is starting to focus much less on the covers and more on original material, and this summer, with the help of a successful Kickstarter campaign, the group released its second album Wrong Side Up.

Recorded at Bridge Studios in Longmont with Paul Andrews, the album comes across like a “Great Country Hits” record. With hard-driving autobiographical numbers like the opening track “Rocky Mountain Town,” to the swinging “My Love Will Keep” — which, for the record, has a phenomenally classic telecaster, fiddle and pedal steel intro — the soft ballad of “Baby You’re Gone,” and the classic sounding truck-driving “Trouble Gotta Hold Of My Soul,” Bonnie & The Clydes run the gamut of country influences while maintaining their own Colorado Country sound.

Throughout Wrong Side Up Bonnie Sims’ voice unabashedly holds center stage. As Quentin Young of the Times Call once put it, Sims’ voice “is like linen fluttering on a clothesline, clean, light, in motion and shot through with sunbeams.”

The Clydes will soon be launching a new mobile app, that should be available shortly. Bonnie said she was happy that the app might mean the inevitable retirement of the dreaded paper email list at gigs. “It’s just an updated way to communicate with our fans,” she said.

This month, Bonnie & The Clydes — who for Halloween covered Ween’s 12 Golden Country Greats in its entirety at Oskar Blues — will team up with their Colorado country brethren Halden Wofford and the Hi*Beams for the Big Country Christmas II at Dickens Opera House this month.

• Halden Wofford and the Hi*Beams