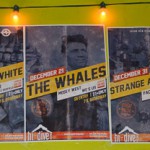 Photos and review by Kirsten Cohen

December 21, 2012 was predicted to be the end of the world. If it was true, I was going to go out listening to live music with friends. Lucky for me that Denver-based band The Whales hosted an end of the world party.

When I arrived at The Hi-Dive, I descended a dimly lit stairway and imagined what must be below. Downstairs I found a room full of affable smiling musicians who said hello and pointed out what I thought at first was mere graffiti. Upon closer inspection; the inscriptions were a hilarious twist of band names mixed with food. A great start to an auspicious evening.

Upstairs in the bar, the scene at the Hi-Dive was one of friendly people there to listen and appreciate the music. We’s us and Mosey West provided the warm-ups and although I sadly missed some of the first band, Fort Collins-based Mosey West was a welcome surprise. Their sound came across as an alternative country rock infusion of guitars, drums, pedal steel and a soaring blend of vocal harmonies.

As the room began to fill up, The Whales took the stage and played a scorching set that exhibited the depth and breadth of their Americana blues rock. The trio exhibited boundless energy from the first downbeat and featured their range as they played slower blues songs, a reggae tune, and a few choice covers. But what they did best was play their catalog of originals, which were all on point and individually and collectively tight.

The Whales are well respected on the Front Range music scene. I wouldn’t be surprised to see them playing bigger venues and gaining notoriety beyond Colorado in the coming year. The throng of local musicians there to enjoy the show included members of The Congress, Fox Street Allstars, Megan Burtt, and others. All that talent can’t be wrong.