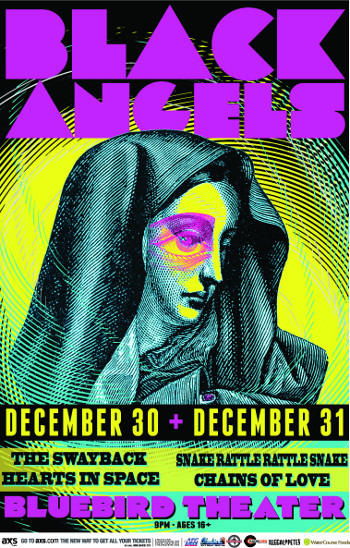 Life has a way of being cyclical in nature. Just like the autumnal falling of the leaves represents a time of change and dormancy in a tree, only to be reborn in the spring healthier and full of life, so too do the cultural ideals and visions of the people who revolutionize our society.

Not surprisingly, music in many ways is as cyclical as the changing of the leaves. In every generation there are revolutionaries that take their genre to an ethereal plane and discover something that transcends time and influences an idea decades after its inception.

The art rock psychedelia of the 1960s seemed dead and forgotten throughout much of the last several decades. Even Lou Reed, founder of the seminal art rock group The Velvet Underground, was playing music that was far removed from the genre. But a recent resurgence has taken the roots laid by the Underground and revitalized and rekindled the relevance of the trippy, echoey genre.

At the forefront of that movement is the Austin, Texas-based The Black Angels. With Fulltone tape echoes, Vox Jaguar keyboards, Holy Grail reverb petals and droning, almost androgenous vocals, the band is not merely recreating a past genre for novelty’s sake, but rather taking inspiration from an era ahead of its time and creating their own more modern version of it. And as torchbearers, The Black Angels are inspiring and uniting the growing number of other freaks that are playing similar music, going so far as to organize and host their own Austin Psych Fest, which in 2013 will feature bands like Black Rebel Motorcycle Club, Warpaint, Deerhunter, and The Warlocks.

“Everything’s cyclical,” said lead vocalist Alex Maas in a recent interview with The Marquee. “One of the reasons we started the Austin Psych Fest was because we’d go on tour and play with all these amazing artists from all over the world and we thought we needed to introduce this to Austin; to show off what’s happening in the world from our perspective. It was just a one day thing, then two and now it’s turned into this beast that has a life of its own. The genre is definitely on its way back and we’re just playing music that we enjoy.”

The Black Angels hearken back to a time in the ’60s when cultural and political divisions in society separated the masses. But even those subsets were on different trips in the ’60s. There were, of course, the hippies and their manner of psychedelia with bands like the Grateful Dead and  the Jefferson Airplane, and then there was the art rock side of psychedelia with bands like The Velvet Underground and the short-lived (1965 to 1969) Austin group The 13th Floor Elevators. That’s the subset that most inspires The Black Angels, who in fact took their name from a Velvet Underground song “The Black Angels Death Song.”

“The genre of psychedelic music isn’t super popular, you know,” said Maas. “It’s not like in the ’50s and ’60s when the good music rose to the top. The Beatles were pop music because they were really, really good. That is what pop was, whereas pop music now has negative connotations, and you have these bands just being mass produced.”

Following in the footsteps of the Underground and the Elevators, The Black Angels work to capture not just the tones, but also the sense of spirituality through music. “It was definitely shared musical interests that brought us together, but also just the shared feelings we got when we played the music,” Maas said. “It was like a religious experience. And I think that’s how we stuck together. We conceived this idea and all of a sudden we were pregnant with this band that has been growing and that we believe in.”

Not fitting the mold for Top 40 radio, the band is stuck in the proverbial underground and Maas said that the Wild West mentality may soon recoil enough to where it benefits bands. “The internet, it’s the easiest way for you to spread any type of message, whether it’s positive or negative, music, art, ideas or whatever. It’s still like the Wild West,” said Maas. “But people have to realize that if you want these bands to stick around and keep making records that are music therapy for you, then you need to support their music by buying it and not stealing it. But I’m positive, and I think it’s getting better. I think there’s a social change that’s already happening. It’s a change that people want to support bands, especially at shows. I believe in the goodness of people to make a conscious effort to buy music; especially now when it’s not just going to a big record label,” Maas said.

Formed in 2004, The Black Angels’ lo-fi presence and fuzzy guitars drew massive attention in the indie scene with gigs at SXSW and the like. When the group released its first album, Passover, the reception was solid and garnered praise for its dark sound. The group followed in 2008 with Directions to See A Ghost and had their most successful release to date with 2010’s Phosphene Dream, which charted at number 52 on the Billboard 200. The Black Angels also released a special album for 2011’s Record Store Day, which combined the group’s first two EPs into Another Nice Pair.

All along, critics boasted about the band’s “authentic sound,” but Mass said there’s really no secret as to how they achieve it. “We just use the same instruments they were using in the ’60s. We use the same pedals and guitars they did. If you want to sound like a band from the ’60s, first of all you have to listen to it and be familiar with it. But there are some things that just can’t be replicated and these new guitars at Guitar Center just don’t sound like a Rickenbacker. They just have a different sound compared to a forty- or fifty-year-old instrument,” Maas admitted.

With a new album due out next spring, The Black Angels will continue pushing forward despite the fact that the group recently suffered an unexpected lineup change. Maas, however, said that it’s a change for the better.

Earlier this year, guitarist Nate Ryan was kicked out of the band after differences developed that could no longer be tolerated. “He just decided he didn’t want to be in the band anymore and we could tell. And it just wasn’t working anymore,” Mass said. “This business isn’t for everybody, some people can handle it and some can’t. It’s a relationship being in a band. It’s like a marriage. But since he’s gone and Rishi [Dhir] is with us, it’s like a breath of fresh air. And we didn’t miss a beat and I love it,” Maas said. Rishi Dhir, of psychedelic contemporaries Elephant Stone, took over Ryan’s empty slot on guitar and added his signature sitar playing to the group, a combination that has left the band feeling not only like they found a replacement but also found one that understands their musical goals.

So the cyclical nature continues for The Black Angels — like the lyric from their song “Yellow Elevator #2”: “Now I can see how the seasons all repeat, and that love makes new things out of nothing that it needs.”