Trending Stories from The Marquee
You are at:Home»Features»Mountain Standard Time Comes Back as a Quintet With New EP, “Sunny”
By Marquee Magazine on February 1, 2013 Features, Interviews 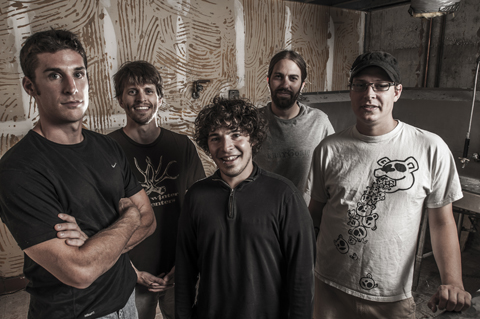 2012 brought much goodness to Colorado: the passing of Amendment 64, possibly the best Broncos season since Elway, and the much anticipated return of Nederland’s own Mountain Standard Time. Finally headed back down that long canyon road, MST will once again bring three nights of Mardi Grass festivities to the Front Range.

With a yearlong hiatus under their belts, the band is oozing a new refined sound.

Having built a substantial Colorado following seemingly overnight, the disbanding of Mountain Standard Time came unexpectedly and to much dismay of the band’s fanbase.

“The time off was necessary,” said guitarist/vocalist Stanton Sutton in a recent interview with The Marquee. “We were just kind of flying blind. When you’re in the middle of the circle it’s hard to see the edges.”

While both Sutton and mandolin player/vocalist Nick Dunbar spent the majority of their time away writing new material for their own musical endeavors, their creative juices couldn’t help eventually being poured into the same blender. “I felt such a huge void in my life,” Dunbar told The Marquee. “At some point you have to leave your shit at the door.”

Within a year of having broken up, the band came back together for their first show in August of 2012. Formed originally as a four-piece string band, MST has had their fair share of lineup changes, and not suprisingly this latest incarnation is different, yet again. Now performing as a quintet acoustic/electric act, the band has welcomed two new members to the stage. Otis Lande joins the group on electric bass and Ryan Ebarb (formerly of Yamn) adds a perfect helping of ivories to the recipe.

“They have this fresh perspective,” said Dunbar, while Sutton added, “This feels like what I should be doing. It was like a match made in music heaven.”

The newly re-founded band will resurrect their annual tradition of ‘Mardi Grass’ over three gigs this month, where they will be joined by special guest Yonder Mountain String Band’s Jeff Austin. Over the course of the shows, the band’s brand new EP Sunny will be available in limited quantity.

Four of the seven tracks will be posted on the band’s website for download the first week of February.

Named to commemorate the life of a very beloved canine companion, the release was recorded at Scanhope Sound this past December with the help of engineer Josh Fairmen.

“He was all about capturing the feel of the band,” Dunbar said. “It’s about the vibe, and that’s what MST has always been.”

“A lot of the albums that people put out never truly represent what they sound like live. We wanted to be the counterculture response to that,” said Sutton of the recording process. “Pushing ourselves as multi-faceted musicians is part of the thrill of being involved in this group.”

With Sunny being MST’s first release since its self-titled debut album hit in 2011, the band approached the studio time in a new light, pulling back slightly to let the sounds flow more organically.

“Millions of notes doesn’t mean anything,” said Dunbar. “Music should breathe. There needs to be space in music.” And that space leads MST to call their music “Rocky Mountain Free Grass.”

“Free grass is kind of like the idea of the free jazz mentality of having that space to open up and not necessarily be technically perfect, but being able to express yourself on your instrument, and it still has that grassy tendency,” Sutton said.

“I would never say [we play]bluegrass for us, but we do have aspects of that,” said Dunbar. “I wouldn’t be in this band if it didn’t.”

Sutton also said there’s one final reason that they call their music something different. “This area is all about bluegrass, but the traditionalists would have our heads if we tried to call ourselves that,” Sutton joked.

With a new album coming out, another string of local shows in April, and a summer full of festivals, there’s more than enough music for it to be Mountain Standard Time all of the time. While their resurrection remains under temporary scrutiny, the members of MST have made it their priority to be sustainable as a band.

“We’re under this microscope,” Dunbar said of the reunited MST, “where we’re like some ticking time bomb, when really we’re the most stable we’ve been.”

“We feel blessed and lucky that there’s still people out there who believe in us,” Sutton added.