Trending Stories from The Marquee
You are at:Home»Album Reviews»Otis Taylor “My World is Gone”
By Marquee Magazine on February 1, 2013 Album Reviews, Brian F. Johnson 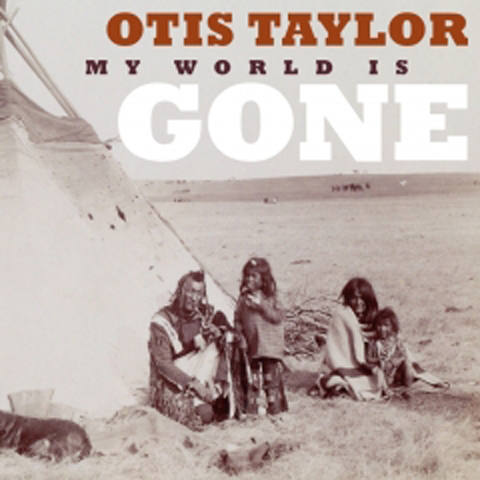 My World is Gone

Otis Taylor could put out a heavy metal album and he’d still be considered a bluesman. Even if he went totally 1980s hair metal, critics would still cite his “trance blues” signature style. The blues tradition is so engrained in his phrasing, his playing, and his vocals that it overrides any other genre he touches.

The same is true on his very rootsy Americana latest release My World Is Gone, the thirteenth album of his enduring career. If any other artist released this exact album it’d be classified as Americana. Taylor, however, can’t help but turn it bluesy.

The opening title track is the most traditional blues song on the album, inspired by a Native American friend of Taylor’s, singer/guitarist Mato Nanji of the band Indigenous. Backstage at a Jimi Hendrix tribute show, Nanji, speaking about how Native American culture has been undermined in today’s culture, said to Taylor, “My world is gone.” Those four words inspired not only the song, but the entire album, which includes several tracks central to that theme.

Being from eco-conscious Boulder, Taylor even, not suprisingly, recycled one song for the album, “Lost My Horse,” originally from his 2001 release White African. This version, however, is a new arrangement that features Taylor and Nanji trading guitar and mandolin lines.

“Blue Rain in Africa” is a scorching rocker, but still bluesy. “Girl Friend’s House” and “Jae Jae Waltz” are both old-timey and while there is tons of banjo on the album, “Jae Jae Waltz” puts it in the forefront the most; but both songs are still bluesy. “Coming with Crosses” starts with the lyric, “They murdered my mother,” so despite the sailing fiddle, it’s of course, bluesy. So are “Green Apples” and “Sit Across Your Table.”

And that’s the crux of this album and Taylor’s career, for that matter. He’s so skilled at telling the stories of the blues, both in his playing and in his baritone vocals, that it almost doesn’t matter what he plays. It’s apparent throughout his entire discography, but it’s abundantly clear on this gorgeous release. He’s one of those rare musicians that can’t be heralded enough and hopefully My World Is Gone is recognized as one of his best, on an international scale.                                                        — BFJ