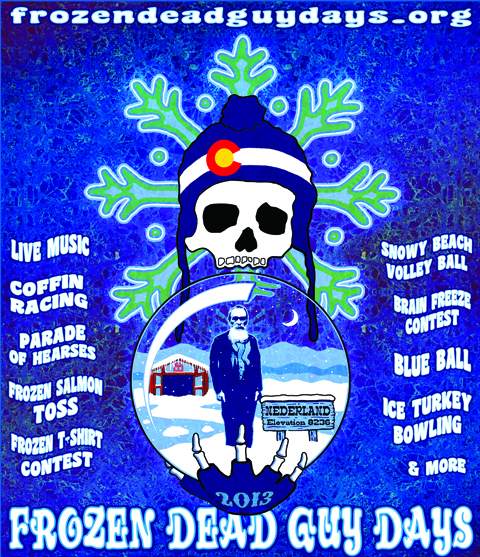 Known as one of the most unique and quirky festivals in the country, Nederland’s Frozen Dead Guy Days — the freakiest festival along the Freak to Freak Highway — has after 12 years become a world ‘renowned’ event.

The event pays homage to Bredo Morstol, who is frozen in a state of suspended animation inside a Tuff Shed above Nederland.

The performances – which include everything from rock, blues and funk, to bluegrass, Americana and folk – are spread out over two stages during the day, the ReAnimate Yourself Tent at Chipeta Park and the Brain Freezer Tent on East First Street, as well as in the town’s bars and restaurants at night. Below are a few highlights of the lineup.

A complete schedule of events and musical acts can be found by visiting www.frozendeadguydays.org. All events are free, with the exception of the Blue Ball.

Straight out of the streets of Boulder County, this 4-piece band is tossing funk, old-school rap and hip-hop into a bowl and mixing it up a bit. Led by smooth-talking MC, Heather Taylor, the Power Lung Rangers brings the lighter side of rap to the ReAnimate Yourself Tent on Friday afternoon.

This seven-piece band from Boulder meshes funk, bluegrass, some jazz, and a touch of salsa flair. At times, this cleanly harmonized band resembles the Avett Brothers — if the popular band had a horn section. Other times, the group sounds like someone gave Sly and the Family Stone a banjo.

:: The Good the Bad and the Frozen Blue Ball ::

Fresh off their first gig at the Boulder Theater, the Nederland-based four piece string band will be performing in front of a hometown crowd at the traditional Blue Ball, where they will open for the ‘mystery headliner’ Billy’s Rock Billy. Gipsy Moon is quickly becoming known for their quick picking that they define as “Gipsygrass,” combined with rustic harmonies, the smoldering vocals of band member Mackenzie Page, and nature-inspired lyrics that create a place where backwoods music and old-timey jazz collide. A Gipsy Moon show should come with a complimentary starry night, a warm campfire, and a jug of something potent to sip on.

This set marks the debut of Horse and Sparrow — a new project with current and former members of local Americana royalty Great American Taxi. Along with a crew of three other accomplished Front Range musicians, Taxi keyboardist Chad Staehly, and former Taxi drummer Jake Coffin utilize the Taxi sound as simply a jumping off point to explore musical regions that never appeared on Taxi’s routes.

The Zimmerman’s love Bob Dylan. Understatements aside, The Zimms, as they’re affectionately known, are a Boulder-based band that have been performing together since 2006, covering generation-defining tunes by Robert Allen Zimmerman, better known as Bob Dylan, along with some added hidden gems by the iconic rocker.

The Fox Street Allstars take the best of ’60s funk and soul and ’80s rock music and jam them together to create a weathered sound that the band routinely performs to packed houses in and around the Denver area. Whether they’re twisting up a well-known cover song or performing a Fox Street original from their new album Tough Talk, the Allstars feature a refined cast of solid musicians that can tackle anything from barroom rock to country shuffle to smooth R&B.

Girl power is alive and well and thriving in the five-piece She Said String Band. Bluegrass through and through, this all-girl band will kick off musical festivities in Chipeta Park on Sunday morning with some good old fashioned picking and a stream of upbeat tunes. Lead vocalist Allison Weiss has a touch of Detroit rock in her voice, which tunes up nicely with the band’s on-point harmonies and mastered instrumentals.

Hailing originally from the high country of Colorado, the Stereo Giants fuse rock and the funk with raspy vocals and horn-driven instrumentals. Huevos, the band’s latest EP, is stacked with psychedelic guitar spliffs, funky horns, and a little hint of southern country music.

You can’t swing a dead anything in Nederland without hitting a Deadhead or a Phishhead, so the melding of the two super jam bands may just be the perfect fit for Frozen Dead Guy Days. Featuring the rhythm section of Great American Taxi, as well as three musicians who used to play together in the Phish tribute Phix, DeadPhish Orchestra jam together songs from both groups into setlists that end up featuring song segues like “Help/Slip/Frankenstein,” or “Scarlet Begonias/Tweezer/Slipknot,” and encores like “Dark Star > Harry Hood.”