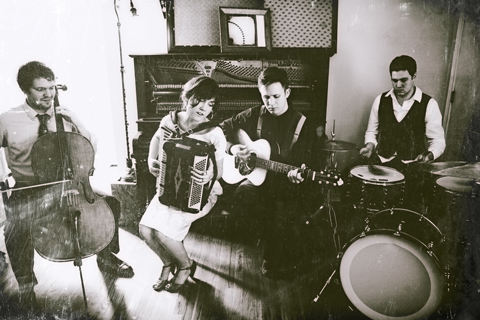 According to a quick Google search, the average commute time in Colorado is just over 20 minutes. But since the decline of quality musical options on the radio, no one except the almighty iPod has come to the rescue of the masses, stuck in their cars on the way to and from work each day — at least not until now.

This month, Denver’s Glowing House will issue an EP, The Down and Out, that clocks in just shy of 20 minutes — a collection that the band says is designed to be a “commute record.”

“This is a record you can listen to entirely on your commute to work,” said singer/songwriter and guitarist Steve Varney, in a recent Skype interview with The Marquee. “We’re very aware that people can get music very quickly now and that it’s not that they don’t enjoy the five-and-a-half minute track that we worked really hard on, but that they might be in the mood for something a little lighter and uplifting and fun.”

In their four years together, Glowing House, made up primarily of Varney and his wife and songwriting partner, Jess Parsons, has released two full-length albums, including last summer’s critically lauded album Days Run Out.

Since that release, though, Varney and Parsons haven’t stopped writing and while there may not have been a grand plan to release an EP nine months after their full length, the material seemed to dictate it was time.

“Not a lot goes through our filters without being released,” Varney said. “I envy the writers who can kick out a ton of music in a short time and then pick from a  batch of 25 to 30 tunes when it comes time to record. I’d love to have my hands on that amount of material. But we kind of write as we go and we always edit as we write, finding the best language to put forth our point. As a result of that, we’re pretty happy with where we are. It’s important to keep putting your art out there. You know, you’re not going to move any paintings if you don’t paint.”

The pair, together with cellist Phil Parker and drummer Michael Jean McKee, play a post-modern folk style that has been compared to fellow Denverites The Lumineers, Swell Season, and The Civil Wars. It’s a minimalistic, acoustic musical style that places massive amount of focus on poetic lyrics and rich, heavy harmonies.

In fact, the recording of the EP highlights the different ways that the band approaches the musical versus vocal elements of the group’s sound. Parker has a well-outfitted, acoustically treated home studio, where the bulk of the music was captured. But when it came time to lay down vocals, Glowing House switched venues to insure the best possible recording. “Phil has a very quiet room that has been treated down the T. But because of how important the vocals are to us, we went to a new place, The Mountain House Recording Studio in Nederland, run by Todd Adelman, to put down vocals. It’s an incredibly inviting studio up in the mountains and we did all the vocals up there and did a bunch of important steps on our way to mixing, like running through compressors — really, really nice compressors that none of us could ever afford,” Varney said.

He went on to explain that while the group’s last full-length was an incredibly lush record with a lot of production (“at least for us”), this new EP is more sparse, and thus lighter on its toes and ready for that 20 minute, five-song commute.

Varney and Parsons — who met through a songwriting class at CU Denver, and now work across the hall from one another teaching music at American Music School in Lakewood — show in their music the obvious chemistry that brought them together as a performing pair, then couple, then band. While they started off accompanying one another on their solo works, the two now have developed a seamless synergy, in addition to their superb harmonies that lie at the core of Glowing House’s magic.

“It’s very rare that one of us will come up with something and have the other one veto it, or stall it. We’re really good partners and we still laugh at how much our musical taste and ideas are alike.”