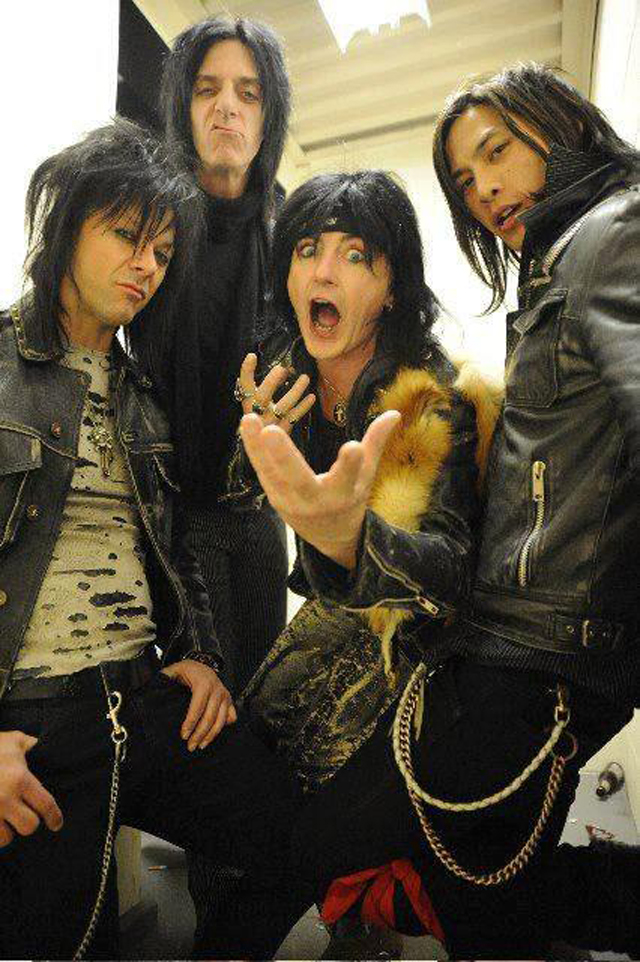 For those music aficionados of the 1980’s Los Angeles music scene L.A. Guns represents a particularly bombastic group whose tales of women, wine and song have always been held in high regard. Currently L.A. Guns has put forth what is easily one of their finest efforts entitled Hollywood Forever. Despite the title, the long player is not a tribute to the smog filled streets of L.A. (ala Motley Crue’s The Saints of Los Angeles) but rather just a solid collection of songs that makes you wonder why Traci Guns was ever stupid enough to leave the band.

In fact the new record highlights singer Phil Lewis’ British heritage more that any other L.A Guns record before it. “Those Brits sure know how to write a song,” said Lewis  in a recent interview with The Marquee. “Of course, I love American music as well and Andy Johns has a tendency to make the records he produces have an English feel as well. It’s funny I have lived in America longer than I lived in England and I don’t have a hint of an American accent, but I have developed a Mid-Atlantic singing accent apart from when I’m really going for the English thing.”

One song that really shows the English vibe of the record is called “Eel Pie,” a deceptively titled rocker that has little to do with the food that one random culinary blog describes as “Apple Pie…with eel in it.” :That song is actually one of Scotty’s (Scotty Griffin the bands bassist) I just helped write the verses and ‘Eel Pie’ was just a working title but Andy and the band liked the title so it stayed…. but the song is about revenge best being served cold,” said Lewis.

For the upcoming tour L.A. Guns will be employing a new guitarist, Michael Grant of the band Endeverafter, as long time guitarist Stacy Blades has departed the group. “I don’t know exactly why Stacy quit the band after almost ten years, as he contributed heavily to the record, but I suspect he got tired of living in an uncertain environment. I think he’s done eating ham and cheese sandwiches in truck stops all around the world. I wish him the best of luck,” said Lewis.

One thing that has cursed many a band that got their start on the Sunset Strip in the 1980’s is that once the record companies lost interest and moved their talent scouts north to Seattle the bands that chose to keep making records often had some of their best works overlooked or underappreciated. For L.A. Guns 1991’s Vicious Circle is a prime example. “Vicious Circle will always be on of my favorites it proved what a diverse band we are,” said Lewis. “Who else could have a song like ‘Killing Machine’ on the same record as ‘Why Ain’t I Bleeding?’ It is all about the songs and the music to me. I’d take on any arena band without their special effects, midgets and pyro and I know we would blow them out of the water. Still I am just grateful to have an opportunity to make new music and have an audience that appreciates it. I am so happy with Hollywood Forever and think we have consistently improved as a band since Waking the Dead.

Of course as any true musician knows one of the key elements to creating listenable new music is having a deep appreciation for your roots and songs from the past. That is another quality that L.A. Guns has in spades. L.A. Guns have many cover songs scattered over studio albums, live albums, compilations, tribute albums and movie soundtracks as diverse as The Beatles’ “I Wanna Be Your Man”  and James Brown’s “Papa’s Got a Brand New Bag.”  “I love covering songs I grew up listening to, it was those songs that shaped me. I never took a single music lesson in my life. It is just my sheer love of music that made me the musician I am today,” said Lewis.  “I recently did a cover of Carly Simons’ “You’re So Vain” that I’m really happy with and I also did a version of “Billion Dollar Babies” a few years ago that got the thumbs up from Alice Cooper himself. The hardest cover I ever had to record was the Styx song “Mr. Roboto.” Wow. What a challenge and the closest thing to Broadway I’ve ever done!”

The other thing that has shaped Phil Lewis and L.A. Guns as musicians is their loyalty to Hollywood when you consider that at least four of their albums, like the current record or their 1991 masterpiece Hollywood Vampires, reference the city or it’s famous Sunset Strip you realize just how influential the city’s vibe is on music. “I love Hollywood. Hollywood greeted me with open arms and a few open legs as well.”