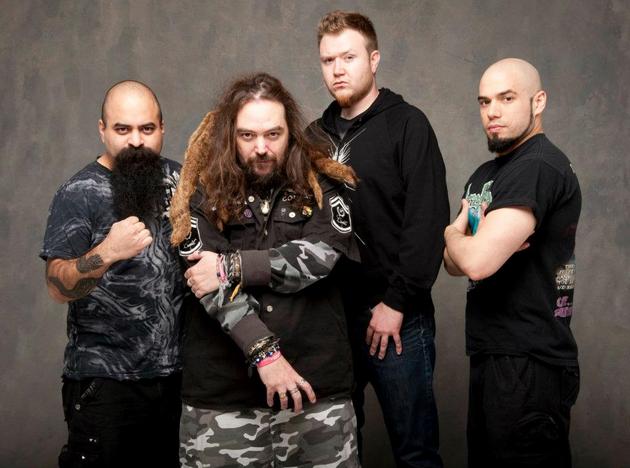 It was a sea of black; made up of shirts with Soulfly or Sepultura written on the front and back. All for Max Cavalera, the Brazilian singer/guitarist/front man who has created his own brand of metal, laden with tribal rhythms and heavy as hell guitar riffs. The Marquis Theater in lower downtown Denver, or LoDo, as it’s affectionately known, was the perfect venue for Soulfly. The Marquis is a rock club at its heart. Small and intimate with no illusions of trying to be fancy, it lends an atmosphere suited for hard rock and metal. With occupancy at around 300 people, Soulfly nearly sold out the venue, with all those in attendance ready for some heavy tribal metal.

The stage at the Marquis is about as bare bones as you can get. Elevated around three feet from the floor with only a black curtain separating it from backstage, Cavalera and company quietly emerged from the rear as chants for Soulfly rang loud from the crowd. Without an introduction they jumped right into the first song “Plata o Plomo” off of their latest album Enslaved, with Cavalera’s only words being “circle pit,” screamed in his signature growl. Taking his cue, the mass of people in front of the stage instantly formed a circle pit, and with the area only around 20x20ft, it was a tight pit full of bodies, sweat and blood.

The next few songs were Soulfly classics. “Prophecy” and “Back to the Primitive” created a near frenzy in the crowd. The pit moved like an ever changing organism, sometimes moving in a circle and sometimes just a chaotic, straight-up brutal mosh pit. Water bottles flew through the air, beers were spilled and noses were bloodied; all in the love of metal.

Halfway through the show, Cavalera, who was dressed in a long sleeved button down shirt, disappeared to the back only to reappear in a cutoff black Lamb of God shirt. The tight space and tremendous amounts of kinetic energy being produced by the crowd made the venue hot as hell for a late March night. But he was back in action before the crowd even noticed, and continued to rock and yell “circle pit” between songs to incite the crowd.

Cavalera’s son Zyon has taken over drumming responsibilities for the band. Zyon, who also plays in the band Lody Kong with his brother Igor, didn’t miss a beat when playing with his old man. He might have looked too young to even be admitted to the show, but he manned the drums with the ferocity of a veteran player, keeping the rhythm heavy and fast while holding true to the tribal sound that is Soulfly.

Just before the band took their break, they played a cover of one of Sepultura’s most well-known songs “Roots Bloody Roots.” At about the 50 minute mark, the band departed the stage, leaving the crowd full of energy after the famous Sepultura cover. It seemed as if the show would be over, but the fans knew otherwise. Cavalera and company came right back after a couple minutes and played an amazing set of “Jumpdafuckup/Eye for an Eye.” It was the climax to a show that kept everyone moving from start to finish. The only injustice of the night was the sound level for the show. Whether or not it was the house sound guy or the band’s sound guy, it seemed as if they were holding back. It’s metal. Metal needs to be as loud as possible with the guitars at the point. It was the only blemish on an otherwise heavy, metal show.