Trending Stories from The Marquee
You are at:Home»Cover Story»Dawes’ ‘Stories Don’t End’ Goes a Different Route With New Producer at the Helm
By Marquee Magazine on May 1, 2013 Cover Story, Features, Interviews, Timothy Dwenger 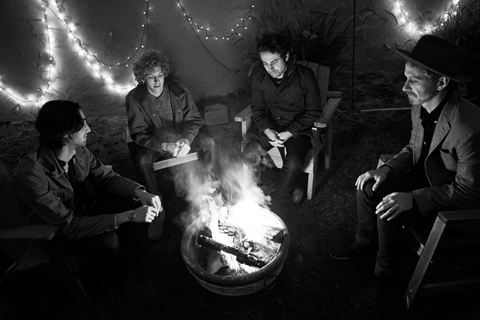 It’s been decades since the Southern California sun first breathed life into the Americana-laced rock of acts like The Byrds, The Eagles, Poco, and Jackson Brown in the late ’60s and ’70s. While there has been resurgence of that sound in recent years, one L.A. band has emerged head and shoulders above the rest to carry on the legacy that McGuinn, Henley, Frey, Brown and others helped to define. That band is Dawes.

Though they released their first album North Hills back in 2009 to widespread underground acclaim, their 2011 release Nothing Is Wrong put them on the map with music lovers around the world and their popularity soared with fans of rock, folk, and country alike. It was a mature and complex record that relied heavily on lead singer Taylor Goldsmith’s poetic lyrics to conjure up vivid images that were paired with a hefty dose of the band’s densely layered harmonies and ringing guitars.

When they sat down to discuss the direction they were going to take with their third album, the band wanted to ensure that they were building a legacy of their own and decided to make some changes to their recording process. “We love the records we did with Jonathan [Wilson], and we love working with him, but at a certain point you start to stunt your band’s growth if you only work with the same producer in the same style on every single record,” said bassist Wylie Gelber during a recent conversation with The Marquee while his band was in Richmond Virginia on tour with Bob Dylan. “If we had made a third record that was just like the first two then everyone would be free to say ‘This band makes this exact record every time with different songs. They are cool songs, and they sound a little different, but we all know exactly what to expect.’ So we wanted to be sure we went into the studio with a new guy to get some new tones and open up the door so that our future records could be whatever we want them to be.”

The band recruited Grammy winning producer Jacquire King, who has worked with everyone from Tom Waits to Buddy Guy to The Kings of Leon, and flew across the country to a studio in Ashville, North Carolina.  “We wanted to get out of L.A. and see how it affected our record,” said Gelber. “I don’t think it had a crazy, drastic effect on the final product but it definitely was cool to all be living in a house that was a mile away from a studio that we could walk to everyday.”

In April of this year, Dawes released Stories Don’t End and while it showcases the same vivid images and well developed characters, the record is definitely a step forward for the quartet. The album’s lead single, “From A Window Seat,” has a bouncy, laid back funk vibe that shows off their new direction behind the sheen of King’s gleaming production. “When we recorded the last two records there wasn’t even a computer in the room. They were recorded to 24 track tape and once we were out of tracks, that was it and we stopped adding stuff onto songs,” Gelber explained. “With Jacquire, we would still go in there, play live to tape, and once we filled up the tracks, whether it was eight or twelve or whatever we had picked for that tune, we would move to the computer for overdubs. The only things that were recorded on the computer were shakers and background vocals and small stuff like that. We were giving in on both sides. For the last two records I was like, ‘Fuck anyone that wants to record us on a computer or whatever, I’m just doing it all to tape,’ and Jacquire has only been using the computer on the last several records he has worked on. We kinda met halfway.”

While it was a big step for the relatively young band to put their trust in a new producer after having so much success with their first two records, Gelber explained that it was a calculated risk the band decided to take together. “The reason we felt comfortable working with Jacquire in the first place was that the four of us had a talk and we said, ‘If we are going to do this we have to really feel confident and comfortable in taking this guy’s opinion.’ Jonathan is a great musician and that’s its own thing but with Jacquire, he has this amazing set of ears on him, but he’s not necessarily a musician and in a completely different way it’s extremely helpful,” said Gelber. “A dude like Jacquire can appreciate great playing and great sound but is also able to say ‘This part isn’t working and I don’t know why and I can’t explain it and whether or not it makes musical sense, it just isn’t working.’ Having a set of ears that were not worried about the cool parts everyone is playing, attached to a guy who is able to tell us what’s working and not working was great. He definitely helped change the arrangement of a few songs for the better, for sure.”