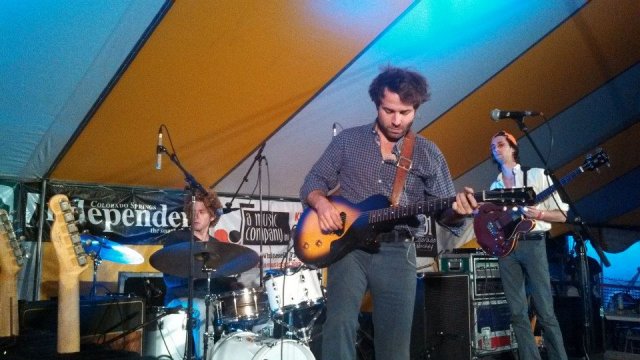 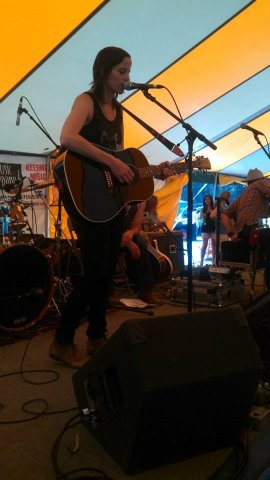 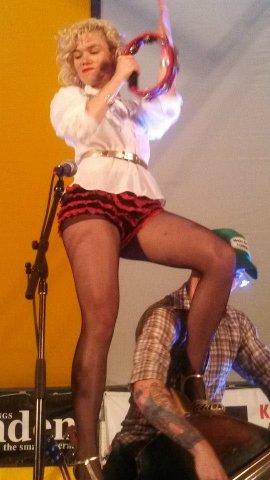 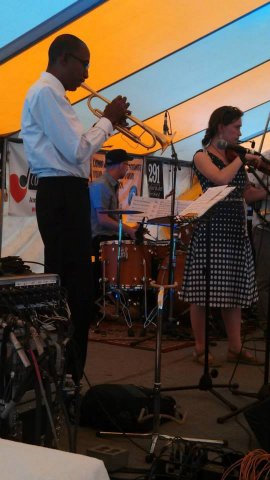 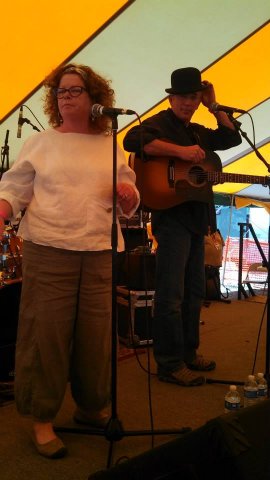 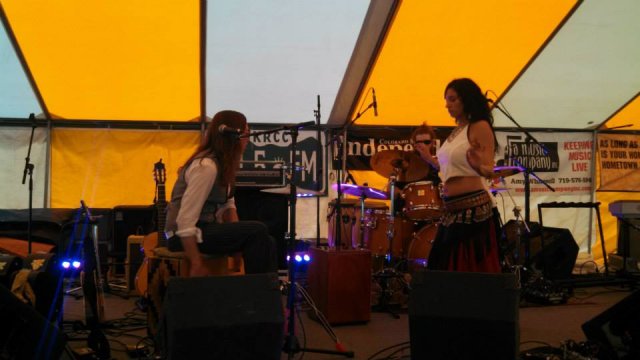 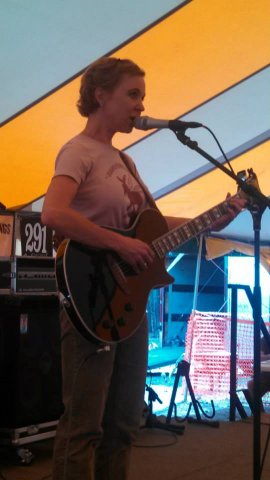 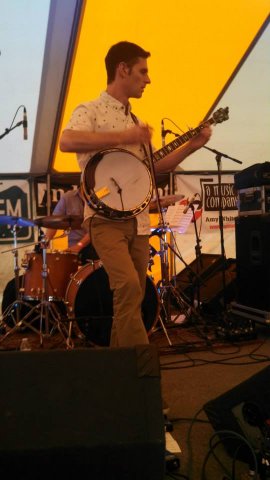 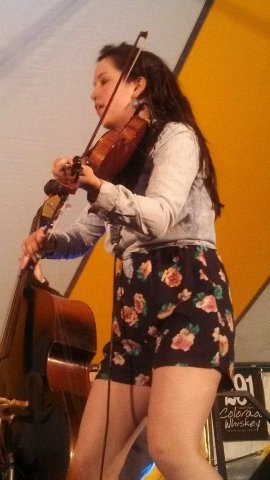 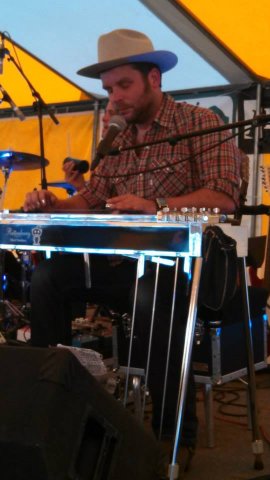 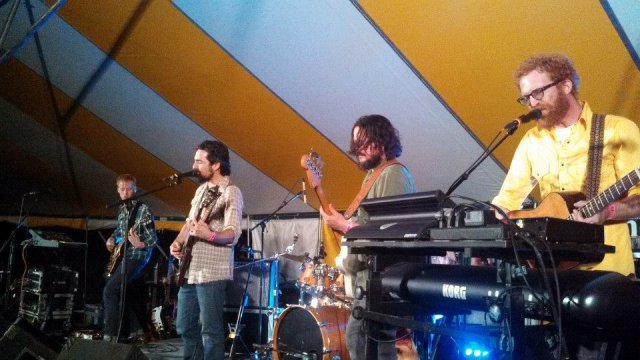 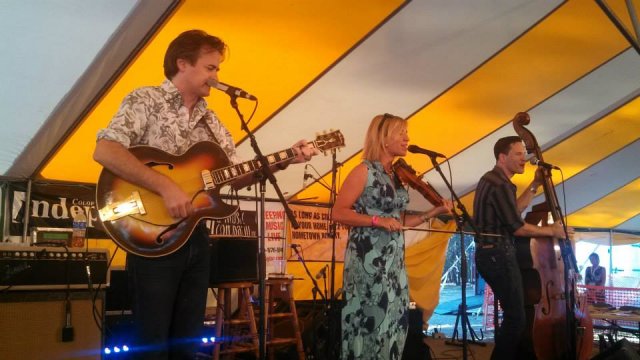 MeadowGrass, the Little Festival That Could, took an exponential leap in its artist lineup for its fifth year.  The small Memorial Weekend festival in Black Forest, northeast of Colorado Springs, always had been more about roots and Americana music than bluegrass.  The 2013 three-day conference not only featured headliners like Dawes, Blitzen Trapper, Todd Snider, and Anais Mitchell & Jefferson Hamer, but also took a chance with free jazz, featuring bowed banjo, and eclectic jam bands whose stage acts featured carnival feats of derring-do.

What really stood out at La Foret Conference Center was the informal, relaxed nature of MeadowGrass’s management methods.  While Telluride and Red Rocks use raised stages and security fences to keep artists far away from audiences, MeadowGrass utilizes an oversized circus tent with a musical stage based on the smallest of risers.  The result is a show that gives new meaning to the phrase “up close and personal.”

Among headliners, Todd Snider‘s Sunday night closer might qualify as the biggest crowd-pleaser.  The lackadaisical nature of the set was demonstrated by his declaration that “I’m not on whiskey, I’m on ‘shrooms.” Friday night, Blitzen Trapper‘s set was a technically-proficient mix of the wild overreach of the Destroyer of the Void album, and the Southern-rock traditionalism of the more recent American Goldwing. Singer and guitarist Eric Earley led the band in a six-song encore that closed with Led Zeppelin’s ‘Good Times, Bad Times.’ Dawes, on the other hand, has the most commercial appeal, given the band’s latest run of late-night TV shows.  Their Saturday night show was generous in harmonies and lyricism, though a skeptic might say the band’s reliance on a Jackson Browne/Eagles sound makes Dawes a little less ambitious than Blitzen Trapper.

What made the festival particularly memorable, though, were the unusual bands that MeadowGrass organizer Steve Harris had chosen to back up the evening headliners. Kristin Hersh offered a tight, intense mix of her own solo songs and those of her former band, Throwing Muses.  A very pregnant Anais Mitchell and her partner Jefferson Hamer delivered a startlingly tight set of old English ballads and numbers from Mitchell’s Orpheus opera, Hadestown. Boulder banjo experimentalist Jayme Stone showcased his new Room of Wonders band, featuring trumpeter Ron Miles and violinist Enion Pelta-Tiller.

Ohio-based David Mayfield brought his aptly-named Parade, a band so athletic and ambitious a stage could not contain the members.  Sera Cahoone came from Portland with plaintive ballads, and Joe Pug brought an Austin sound that owes a lick to his touring companion Joe Ely, but actually moves beyond Ely in its lyricism.  Austin’s Hot Club of Cowtown added a bit of Western Swing to the Texas mix.

Even the local acts were ones that were a shame to miss. Kitteredge-based Patrick Dethlefs, already a statewide star and barely out of his teens, brought the crowd to near-ecstasy on Sunday afternoon.  The Charlie Milo Trio mixed jazz and Hendrix for a Sunday brunch, and the Moonhoney Gypsy Tango Cabaret  brought simmering romantic sounds to Friday afternoon.  Conor Bourgal’s Changing Colors began the Saturday performances with hushed, fluid mystery. Burn the Maps, touring to support a second CD, became an unusual hybrid band when they were joined by members of Edith Makes A Paper Chain. In fact, only local traditionalists like Mollie O’Brien & Rich Moore, Big Jim Adams, Chauncy Crandall, and the team of Cahalen Morrison and Eli West provided any hint of bluegrass to a diverse festival.

The near-perfect nature of the weekend sets a high bar for future MeadowGrass shows. The fifth anniversary proves that MeadowGrass has become one of the state’s most eclectic and enjoyable music festivals.